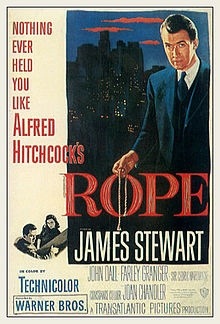 I find it interesting that Alfred Hitchcock has more movies than any other director has in the IMDB top 250 list. I love Alfred Hitchcock and have a nice big boxset of 14 of his movies so I figured I’d watch two of the three remaining films of his in the top 250 that I’d not seen (Rope & Shadow Of A Doubt, which I watched the night after Rope. Notorious unfortunately isn’t in the boxset so I’ll have to get ahold of that somehow!).

I enjoyed Rope. It’s not up there with the likes of Rear Window, Vertigo & Psycho for me (or The Birds – not even in the top 250! Boo!). It’s still very good, though. And James Stewart is in it. Love him. 🙂

It was originally a play so the movie is that way – all set in one apartment. So it’s all about the character development & the building tension that Alfred Hitchcock did so well. You know – the type of movie they couldn’t make today because people would get too “bored”!

There were some really enjoyable characters in the movie, such as the maid (who I read wasn’t in the original play and was added by Hitchcock) and Jimmy Stewart’s character (who was changed quite a bit from the original character in the play). I also read that James Stewart didn’t like this movie later and thought he was wrong for the role. I really liked him in this, though – I’m most used to him in It’s A Wonderful Life, of course, so it was nice seeing him being so different from how he was in that.

Between the two I preferred Rope to Shadow Of A Doubt, which I’ll try to do at least a short review of soon.

And, if anyone cares, here’s a short little post I did on the three Alfred Hitchcock TV episodes that freaked me the hell out as a young child. 🙂 I absolutely LOVED Alfred Hitchcock Presents & The Alfred Hitchcock Hour (and The Twilight Zone!) from a very young age. I think it’s why I may not be completely right in the head now. :-p 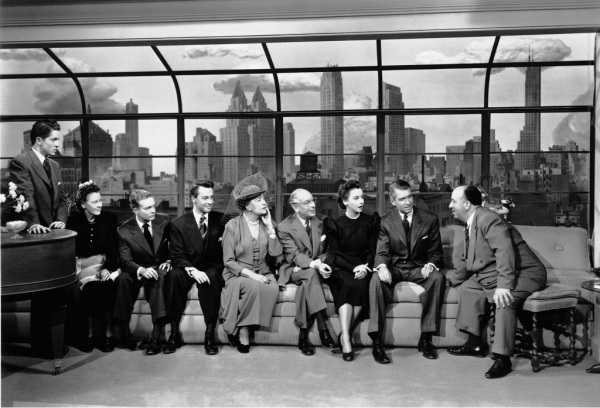