Needless to say… SPOILER WARNING! I’ll first give just the list and then I’ll explain the reasons why I chose them further down the page so that you don’t have to read further if there’s an ending you don’t want ruined. This was very hard to narrow down so I’ve had to put in far too many honorable mentions. I’m sure I’ve missed some great ones that I’ll kick myself for forgetting! As always, this list reflects my personal favorites – I know there are BETTER endings than some of these. But these are the ones I love. 🙂

In order starting with the best:

2. One Flew Over The Cuckoo’s Nest 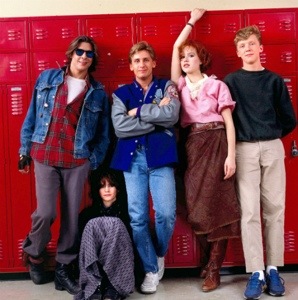 Why I chose them:

Oh my god… How did I not see that ending coming?! Best movie ending EVER and THE must-see film for all film lovers.

2. One Flew Over The Cuckoo’s Nest

I love this movie from start to finish. I adore Jack Nicholson. How can you not love that awesome escape and that awesomely cool & creepy soundtrack music? Why don’t they make movies like this anymore?

Hey – it’s Star Wars. What Star Wars fan doesn’t get warm fuzzies at the end of this one, especially as the music comes in? (I have a real thing for movie music – It’s VERY important to get the music right in a film and it’s especially great when the song or music in a final scene is perfect.)

Perfect example of perfect final song! Probably wouldn’t be in my list without Simple Minds. Yes… I’m SO 80s. 😉 Don’t care. I feel all happy & warm inside when the song comes on & Judd Nelson sticks his soooo not teenaged fist in the air.

“Wait. What? Oh man – now I have to THINK.” I’ve left Inception off my list on purpose because I get annoyed at people liking it more than The Prestige. 😉 The Prestige is so much better!

Again – perfect final song! “If You Want To Sing Out, Sing Out” makes me so freaking happy! I do like a bit of Cat Stevens! I’m so uncool.

“He was stabbed in the throat. He died almost instantly.” *Tears!* Writer reflects. Writer turns off monitor (did he save that?!). He walks off to perfect final (title!) song. There I go with the music again…

I’ve always loved this movie – I just really bought into both Eric Stoltz & Cher in their roles. I lose it every time she puts those damn map pins back in! And I love his poem, which ends the movie:

“These things are good: ice cream and cake, a ride on a Harley, seeing monkeys in the trees, the rain on my tongue, and the sun shining on my face.

These things are a drag: dust in my hair, holes in my shoes, no money in my pocket, and the sun shining on my face.”

And then Bob Seger’s Roll Me Away starts! Perfect for the final scene, although not a favorite artist of mine. But I do like this song thanks to the movie.

Don’t think I need to go into much detail. I’m such a huge fan of Pixar. Who didn’t feel tearful as Andy drove away, leaving his toys on Bonnie’s porch? *sigh*

– The Lives Of Others (don’t be scared of subtitles. watch this!)

– The Secret In Their Eyes (wow – THAT is passion)

– To Die For (Yes! Bitch on ice AND Donovan’s Season Of The Witch is another perfect final song!)

– Saw (Duh. But the rest in the series ruined the first one for me.)

– Heathers (Winona is cool with that cigarette.)

– Pump Up The Volume (f**k you, evil adult authority figures!)

– The Terminator (wait… he came here to save my son and now he’s my son’s father? Who cares – he was hot.)

– Back To The Future (where we’re going, we don’t need roads!)

And a few more:

– Fight Club & Teen Wolf (for the penises, of course! Watch on slow speed. Trust me, they’re there. And… The Pixies, Where Is My Mind! Awesome end song!)

– The beginning of Memento (Ha! Yeah. I’m trying to be clever.)

**Edited to add two more – The Secret In Their Eyes (above) and City Lights:

I’ve just watched Charlie Chaplin’s City Lights. Wow. That ending is now in my top ten (but not sure which one to take out). Lovely ending. 🙂