I said it before and I’ll say it again – the only reason I watched this is because Ryan Gosling is in it. It’s about politics. I hate politics. This sort of drama also isn’t really the kind of movie genre I tend to go for. So bear that all in mind during my quick little review!

Ryan Gosling plays one of the campaign managers for George Clooney’s character – a governor and presidential candidate. I actually didn’t know beforehand about the other big names in this – Philip Seymour Hoffman as the senior campaign manager for Clooney, Paul Giamatti as a rival campaign manager, and Marisa Tomei in a pretty small role as a reporter. Oh, and Evan Rachel Wood as an intern for the Clooney campaign. Evan Rachel Wood not only got to be in this with my lovely Ryan but also starred in Across The Universe with another big crush of mine – Jim Sturgess. So I’m pretty sure I don’t like her. 😉 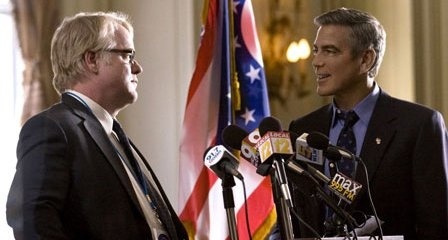 Thanks to the hubby for pointing out that George Clooney directed this movie & wrote the screenplay (along with Grant Heslov and Beau Willimon) in response to me saying that Clooney seemed a bit wasted in the movie. Okay – it makes sense then! It’s not a big role compared to Gosling’s – the story really follows his character. Clooney IS perfect for the role, though. Not hard to imagine him as a politician with his natural charm & charisma – if he ran for something in real life I might actually take the time to vote! The other big names did seem a little wasted, though – Hoffman had a bit more screen time than Giamatti & Tomei but it still wasn’t a lot compared to Gosling. And they did their jobs well, as they always do, but their roles didn’t really require much effort from them.

Overall, I think this movie lacked the passion & dramatic tension we’ve had from other political dramas. (Not that I’ve watched many so maybe I’m not the best judge. Lol!). I remember getting very into the story in Good Night And Good Luck (that was political, right?!). And I’m sure All The President’s Men is a much better movie about political scandal (not seen it!). Okay – I really don’t know much about political dramas. Feel free to ignore this review. :-p 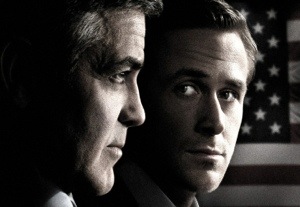 Perhaps, as real life politics are so corrupt and there are plenty of scandals to choose from, I think a fictional movie about the dirty stuff that goes on behind the scenes doesn’t quite pack the same punch as the ones based on true stories? The movie started out okay but then the “scandal” came to light and everything that happened afterwards suddenly made it feel like a Hollywood movie. Which it is, so maybe that’s not a bad thing! Worth a watch if you like political dramas & quality actors.

Good but currently in last place in my Ryan Gosling Project 🙂