This is the second Studio Ghibli film I’ve watched since starting my IMDB Top 250 Movie Challenge – the first one was Princess Mononoke. I watched Spirited Away years ago in the cinema and My Neighbor Totoro & Ponyo last year.

As I said when reviewing Princess Mononoke, I think I started on the wrong one with Spirited Away. Not the best one to start on with my Western Disney-loving ways as that one is pretty out there. 😉 I plan to re-watch it after I’ve finished the rest of the Ghibli stuff to see if I appreciate it more. I loved Princess Mononoke and that one & Totoro finally have me starting to understand why so many people are in love with the Studio Ghibli stuff.

Laputa: Castle In The Sky was a delight. I really enjoyed it. Whereas Princess Mononoke was more serious and adult, Laputa is one for the kids (and big kids!). It follows a young girl named Sheeta who is on the run from air-pirates and other baddies. They’re all after a mysterious amulet she wears around her neck and they’re all searching for the legendary Laputa, which is a floating city in the sky. Sheeta meets a young boy named Pazu who befriends her & helps her on her journey. And I’ve just made the plot sound FAR less complex than it actually is… lol! Although, as far as the Ghibli stuff goes, I suppose it’s a fairly simple one. 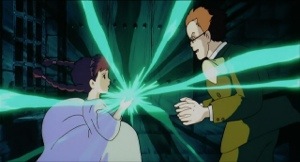 What I loved about this one, and most Ghibli stuff, was the characters. Sheeta and Pazu were so sweet and likeable & made a great team. There was a real innocence to them yet not in an annoying kind of overly fragile way (another of the strengths of Ghibli characters, I think). They’re kids with the innocence of kids but they’re also very clever & strong. I can see why many (cool, geeky, film-loving) parents are happy to let their kids watch this and other Ghibli films with similar young characters – it doesn’t treat kids like they’re stupid or “bratty” (oh how I hate movies with bratty kids!). Yes the story is a bit complex for the very young but there’s more than enough going on for them to enjoy anyway and it’s one they’d gradually understand more as they got older.

The other thing I love about Ghibli movies (aside from just the great overall look to them) is that there’s pretty much always something or someone that I fall absolutely in love with. With Princess Mononoke it was the Kodama (still my favorite Ghibli “thing”! Adorably cool). And of course everyone falls in love with Totoro (right?). With this it was the Laputan robots. I want one! 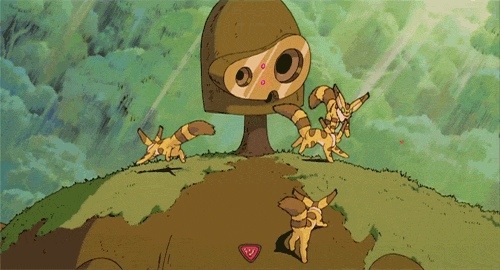 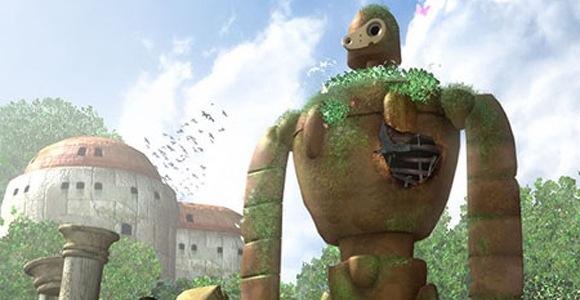 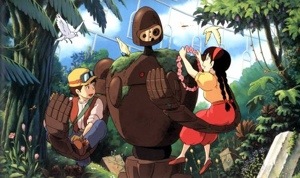 Another great set of characters were the air-pirates and their mother & leader, Dola. They were great! They were the Fratellis from The Goonies! Totally! (although my smart-ass hubby pointed out to me that in both movies the characters are just based on the real life Ma Barker. Whatever! I still like the link to The Goonies). 🙂

I’m not really sure what else to say about Laputa: Castle In The Sky. I’m still pretty new to the Ghibli universe and can’t compare it to many others yet. I’m thinking it’s probably not the very BEST Ghibli if you’re judging it as some sort of film critic (which I’m not) but it was an absolute joy to watch and a million times better than so many animated films aimed at children. (But I’ll still always love my Pixar stuff!). I think what I’m saying is that even the “worst” (as if you could ever use that word in this case) Ghibli is still leagues ahead of the “best” animated films from other studios.

What I’m really saying is – just watch this. It’s awesome. And FUN.