I’d been wanting to watch Monkey Shines (also called Monkey Shines: An Experiment In Fear) for a while as it was directed by George A Romero. I’m a big big fan of his zombie movies – Night, Dawn & Day are three of my all-time favorite movies (especially Dawn!). However, I’ve not really watched anything else Romero has done. Based on Monkey Shines, maybe I’m not missing much?

Monkey Shines is about an athletic man (Alan) who, after being hit by a truck while out running, is paralysed from the neck down. He has a friend who has been experimenting with injecting human brain tissue into monkeys and this friend decides to give one of these monkeys (named Ella) to his now paralysed friend. The friend hires a woman named Melanie, who trains monkeys to help quadriplegics, to work with Ella & Alan.

And then, naturally!, Ella the monkey starts to have some weird kind of telepathic connection with Alan. And then Ella gets all jealous and angry as Alan’s feelings of anger at his current condition are manifested in her crazy-ass part-human-brain-tissue monkey noggin. And then, FINALLY, crazy-ass monkey gets all murder-y. But it takes something like an hour and a half for this to happen. Up until that point, not much happens. So you just keep watching and watching knowing that at some point the monkey will go mental!

I’ll sum up the movie here (with MASSIVE SPOILERS – I’m going to tell you what happens in the entire thing…):

– Athletic man (Alan) is hit by truck while out running. In a very boring, slow motion type of way – not in a Final Destination sort of way.

– Alan is operated on (by Stanley Tucci! with an almost full head of hair!). Alan is paralysed from the neck down. 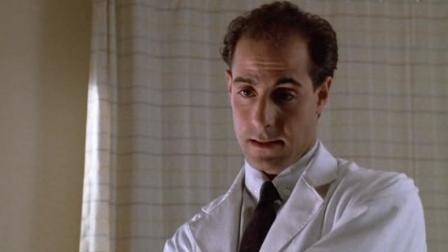 – Alan comes back home to a party his annoying overprotective mother has thrown for him and his “new life”. We learn that Alan’s woman (Janine Turner – that chick from Northern Exposure!) has been cheating on him with his surgeon (hairy Stanley Tucci!). Fuckers! So she leaves Alan for the Tucci.

– Alan’s friend (played by the guy who was also the friend in Mad About You! Ira I think? I hated that show!) gives Alan Ella, the experimental monkey he stuck human brain tissue into. 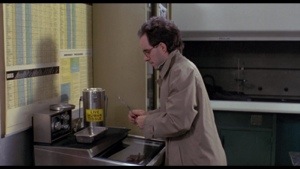 – The friend hires Melanie to train Ella to help Alan

– Totally forgot about the bitchy nurse who stays with Alan. She hates the monkey. She has an annoying bird that almost pecks Alan’s eyes out. Ella kills the bird for Alan. The first in her murder spree…

– Ella kills Stanley Tucci & Northern Exposure chick by burning their place down. I can’t remember if this is before or after oral sex scene. Oral sex scene distracted me. I was paying very little attention to this movie until all the murders and oral sex…

– Um, monkey finally goes crazy. The monkey murders start! Monkey kills:
a) Stanley Tucci & Northern Exposure chick b) Alan’s annoying mother by throwing a hairdryer in the bath with her. Not bad. c) the friend from Mad About You by injecting him with something. Oh yeah – and d) the bird…

– Melanie comes over because she’s worried about Alan and knows something is going on. Monkey tries to kill her too. Melanie is knocked unconscious and Ella tries to start her on fire.

– Alan is able to move his hand just enough to play the music Ella likes that has calmed her down before. It’s their “song”. Oh yeah – I forgot to mention that Alan’s hand moved a bit once. After seeing a doctor, he was told his condition MAY be reversible. Yep – I should have mentioned that earlier.

– Okay – this is the good part. MASSIVE SPOILER if you don’t want to know the ending (but if you’ve read this far you know the whole rest of the movie anyway…). 😉 Ella is calmed by the music and cuddles up with Alan. Alan then clamps his jaw into Ella’s throat and flings her back and forth with his head as she flops around like a rag doll a bunch of times & then he tosses her aside, dead. Kind of amusing to watch. Highlight of the movie! Well, that and the oral sex scene… 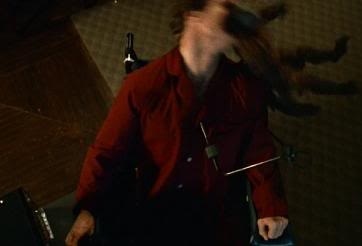 – Alan has surgery and, yep, the paralysis IS reversible! He gets out of his wheelchair after surgery and heads home with Melanie. And they live happily ever after. I assume.

– Oh yeah – during Alan’s surgery he dreams that Ella pops out of his back in a total “Alien moment” as the surgeon cuts it open. Highlight number three of the movie. 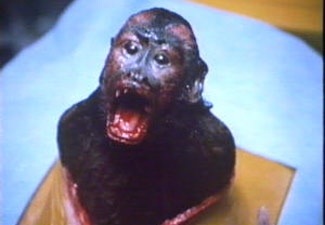 Okay. Well. I’m not sure if I’ve just made this movie sound really horrible or really awesome. 😉 And, to be honest, I’m not completely sure how I felt about it. I was disappointed but, mostly, I was a bit bored. It’s not THAT bad of a movie but I think they had made it sound like more of a horror movie than it actually is. It’s almost more of a drama – it takes the whole story fairly seriously. But I suppose it doesn’t quite work as the story is a bit too “out there” and a bit silly. Or, at least, it was maybe too out there for 1988. As much as I HATE remakes, I think this movie could almost work if the right person remade it now.

In the end, I was actually glad it wasn’t the full-on horror movie I was expecting (I don’t really like horror anyway). But the pace of the whole thing really was too slow and it really did drag at times. I know my attention span is getting shorter in my old age but it’s not THAT bad – I can still manage to pay attention for a two hour movie but my mind wandered A LOT for the first 90 minutes. Mainly, this really felt & looked more like a TV movie. Or… felt like it was at least ten years older than it was (I was surprised it was 1988 when I looked as it seemed more like very early 80s). Also, for some reason I had it in my mind that this movie was going to be more Cronenberg-like (don’t know why – maybe because the story just seemed like that sort of weirdness). Come to think of it… Cronenberg would be the perfect person to remake this! THEN I think this movie could be awesome. (I do still love Romero, though, and all his zombies!).