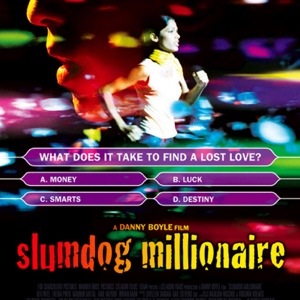 A Mumbai teen who grew up in the slums, becomes a contestant on the Indian version of “Who Wants To Be A Millionaire?” He is arrested under suspicion of cheating, and while being interrogated, events from his life history are shown which explain why he knows the answers.

I’ll add that this takes place when he’s answered all but the final question. They never expected him to get that far so they interrogate him before he’s able to go back & finish the show. We’re shown his life in a series of flashbacks as they go over each question he’s answered so far & he explains exactly why he knew the answer to each of them. 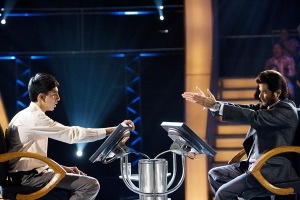 Urgh. Okay. I’ve been putting off reviewing this. There are obviously people who love this film. It won 8 Oscars including Best Picture, Best Director, and Best Adapted Screenplay. AND it’s in the IMDB Top 250 films, which I see as more “real world” and more representative of what people actually like. Well, I think the IMDB voters were swayed by all those Oscars and have given this film a far higher rating than it deserves. Yet another current film in the Top 250 simply because it’s current and lots of people have voted for it.

I posted a little while ago that I’d watched this and didn’t really like it and then waited for the backlash. Turns out I’m not alone in feeling this way about the movie. The main thing people kept saying was “overrated” and, although I think that word sometimes gets used too often when talking about movies, it really is the accurate word to use for this one. I don’t want to start trashing this movie TOO much – it’s not horribly bad, just average. So I’ll divide it up into the Good & the Not-So-Good like I did with Iron Man 3 (also average – Sorry! But at last I enjoyed that one far more than I did Slumdog). 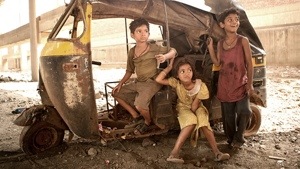 – The main character – Jamal. He’s fine. Thank god for that at least – it would have been unwatchable otherwise. I didn’t feel that he was as fully fleshed out as he could have been & I didn’t feel TOO strongly about his character & what would happen to him but I think that was the fault of the script, not the actor. I bought into him a bit more as a young boy than when he’s grown up but I think that’s because the majority of the scenes where he’s older are when he’s on the game show or when he’s being questioned about cheating.

– The love story between Jamal & Latika. Although, I have to say, I found it totally unbelievable it was still sweet and you do find yourself rooting for the guy at the end & wanting him to get the girl.

– The concept. It’s an excellent idea for a story! I know it’s based on a book so I looked it up & read a bit about it. Looks like they changed A LOT. It’s really just the overall concept that’s stayed the same but, again, it’s a REALLY GOOD concept. Which is why it was all the more disappointing that the movie was so weak! How did they make an exciting story so boring? I’ll go into that more in “The Not-So-Good” below.

– The final 20 minutes. It DOES finally get fairly exciting at the end.

– The shit-covered kid. Jamal jumps down into a huge pile of shit after his brother has locked him in an outhouse & it’s his only way of getting out. This is in order to get some big famous actor’s autograph who happens to show up right at that moment. This actor is the answer to one of the first questions Jamal later answers on the show. I obviously won’t give away any of the other questions but I had to mention that one as it’s SO ridiculously stupid. What is it with Danny Boyle & excrement? Honestly. You know I tried to watch this movie about a year ago? I didn’t make it past that bit the first time around.

– Jamal’s brother – Salim. He starts out as your typical prick of a brother when they’re young & then turns into some pathetic & totally unbelievable version of Tony Montana.

– Poorly developed characters. Aside from Jamal (who actually isn’t very well-developed either), we really don’t get to know anyone. WHY is his brother a prick? They have a horrible life growing up – all they have is each other so why wouldn’t he treat Jamal better? Latika is slightly more believable as a young girl than when she grows up to be absolutely stunning – I felt they REALLY wasted her character. We know nothing about her! She becomes nothing more than a pretty face for Jamal to want to win a game show for. But you still want things to work out for them as they’re the ONLY likeable characters in a film filled with hateful people. Oh, the game show host – PRICK! And the gangsters… Oh yes, there are bad guys in this. Gangsters. But, like, really shit gangsters – not Scorsese gangsters. Yeah. Honestly – the “baddies” in this were so unbelievable. I didn’t understand their motives or why they even needed to be in the movie AT ALL other than to add a bit of excitement I guess? So unnecessary – the story itself is exciting enough without having to add all the lame one-dimensional bad guys.

– The way they took an excellent & exciting concept and managed to make a boring movie. Seriously – How did they make an exciting story so boring? I think one problem is that they made it too unbelievable. Surely the audience (film audience) is meant to be convinced by Jamal’s story of “why” he knew each of the answers. Some of it was just too far fetched, though. And I expected the “feel good” film that was promised. I expected a moving drama. I didn’t expect to keep looking at my watch up until the final 20 minutes when it finally gets exciting. (Okay – I don’t wear a watch. Does anyone wear a watch anymore?). 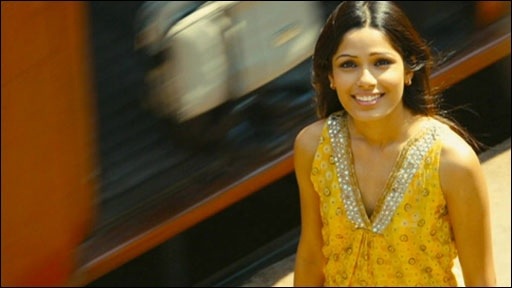 Summary: Slumdog Millionaire takes an excellent concept & manages to make a totally unbelievable & shallow film with two underdeveloped main characters that you only slightly care about. The rest of the characters are very one-dimensional, especially the “baddies” who felt totally unnecessary. This supposed “feel good film” just left me cold. And I obviously won’t give away the ending (if you still want to see it?) but if you’ve seen it you’ll know what I mean when I say: And now what? Honestly, what is going to happen AFTER how this film ends? Luckily I don’t care!

But you probably shouldn’t listen to me – Slumdog Millionaire won 8 Oscars. Including Best Picture. Yeah. 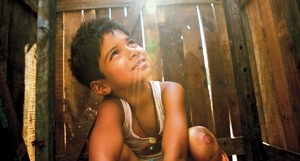 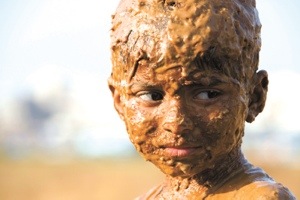 And I thought my review for Danny Boyle’s Trance was a bit harsh… Turns out I enjoyed it more than this one. But I never want to see a kid covered in shit OR Rosario Dawson’s vagina ever again. 😉