Wonder by RJ Palacio is about a boy named August Pullman. August has been home schooled his whole life due to the many surgeries he’s had to endure as he suffers from a “rare craniofacial deformality”. As he starts the fifth grade, his parents decide to enroll him in school for the first time. The novel follows August’s experiences through his first year of attending school with other children & how those children react to a boy with severe facial deformities.

Wonder is a wonderful book – I really enjoyed it. I’d say it’s yet another one of my “young adult” books (I read a lot of those) but I suppose it’s aimed at a younger age than those. I think it should be required reading for all kids of about 8 or so & up. I don’t know a lot about it but think it has been read in some schools and I think it deserves to be. With bullying such a huge issue these days, this book teaches children that we’re all the same on the inside and that mean words can cause more harm than they might realize. This is something parents SHOULD be teaching their kids at home but, obviously, that isn’t always happening. So hopefully this book will make some children stop and think before they say something cruel to someone. I like to think that, anyway! I’m sure RJ Palacio had that in mind as she wrote this book.

The book starts out from August’s point of view but then we get the story told by various other people in his life as well (his sister, his sister’s friend and boyfriend, and a couple of August’s new friends at school). I really liked that it was written in this way and I think it gives you a lot more understanding of what it’s like living with a severe facial deformity but also what it’s like for those around August. It felt more honest also getting to hear from his sister and from his friends and how, although they love him dearly, being a part of August’s life also causes difficulty for them. It was especially good seeing his sister’s side of things and how she’s really just had to “get on with things” all on her own as her parents (naturally) had to put more focus on August’s health & needs. And, as to be expected, there’s pressure on his new school friends who feel the need to stick up for August as not ALL the other children are nice to him & accept him for the sweet, normal, Star Wars-loving boy that he is on the inside.

Wonder is wonderful. I recommend it to all parents and their pre-teen children. It teaches the value of friendship & acceptance. I don’t know if it already is in some schools but I think it should be required reading. As quoted by one of August’s teachers in the book: “When given the choice between being right or being kind, choose kind.” – Dr Wayne W Dyer

(And Space Oddity by David Bowie and especially Star Wars are mentioned in the book. I approve!) 🙂 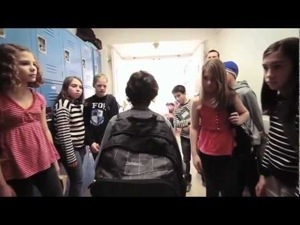 Photo is a still from this Wonder book trailer at YouTube. Supposedly they’re planning on making the book into a movie.