After becoming a father to Margo, Edith, and Agnes, Gru is no longer an evil mastermind and is instead throwing kids’ birthday parties & making jelly. That is, until he’s recruited by the Anti-Villain League and must help save the world from a new evil villain… 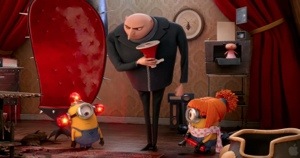 I’m a HUGE fan of the first Despicable Me. It’s the first (and only) non-Disney or Pixar animated film that I’ve ever really liked. Everything about it is brilliant – the relationship between Gru and the three girls who are loveable without ever being overly saccharine and feisty without being bratty, the hilarious minions (one of the greatest cinematic creations in recent years in my opinion), and both Steve Carell & Russell Brand being genuinely funny instead of sometimes slightly annoying. Luckily, all these things are again present in Despicable Me 2.

It was never going to live up to the first one (not many sequels do). But at least it comes close, so I’m happy with that. It starts early on with a birthday party for Agnes, which reminds us how much Gru fell in love with these three girls and how he’d do anything for them. I love the relationship between Gru and the girls – It was great seeing that develop in the first one and to watch Gru go from villain to hero so, of course, we don’t get that in this film. But we still see plenty of Gru & the girls together in this one and, at the end, we get a moment ALMOST as sweet as when Gru reads the girls the story he wrote in the first Despicable Me (that scene gets me every time!). And we get Gru being a (very!) overly protective father when Margo starts showing an interest in boys. Some great funny scenes involved with that!

And then, of course, we have the MINIONS. Oh man – I love those little dudes so much! I want my own army of minions. And they’re as hilarious as always. Luckily, there are a lot more scenes with them in this one than in the first film. That’s a good thing (to me, at least). And they’re even more funny this time. I won’t spoil anything but I’ll say they sing a song at one point and the “lead singer” REALLY cracked me up. And there are so many little funny “blink and you’ll miss it” moments with the minions – it’s a lot like how you really need to pay attention to what’s happening in the background of Pixar films. The minions are just plain brilliant – I can see why they’re making a whole movie just about them.

I really have nothing bad to say about this film other than, overall, the plot was weaker than the one in the original movie. And the new character of Lucy Wilde, who works with Gru as part of the Anti-Villain League, borders on annoying (which is kind of the point anyway). But so does Kristen Wiig, who voices this character. But these are pretty minor things and didn’t ruin my enjoyment at again seeing these characters for whom I have such affection. And, again, the music is brilliant thanks to Pharrell Williams & Heitor Pereira – something I also loved about the first one. And Gru goes on a pretty hilarious date with a woman far more annoying than Kristen Wiig… Plus we have cross-dressing minions again – one dressed as a French maid and one in frilly underwear. Okay – maybe I’m immature but cross-dressing minions are awesome. 😉

Doesn’t quite have the heart of the first one but definitely has all of the humor, if not more. This movie is genuinely hilarious, which is very hard for kids’ films to achieve (trust me – the adults in our sold-out cinema were laughing as much as the kids). Despicable Me 2 is just plain FUN. But, if for some reason you’ve not seen the first one, definitely watch it before seeing the sequel – you really need to understand the characters of Gru & the girls. You’re missing out if you’ve not seen the first one. If you have and if you love it, you won’t be disappointed by the sequel.

**Forgot to add – there are quite a few funny extra scenes with the minions throughout the credits so you might want to stay for that. I believe there’s no scene AFTER the credits…