This story follows the friendship between a lonely 8-year-old Australian girl named Mary and a 44-year-old New Yorker with many mental problems named Max. Their friendship starts in 1976, when a very lonely and neglected Mary decides to write a letter to someone in New York and chooses Max at random from a telephone directory.

I hated this. Absolutely hated it. That is all. Review over. :-p

Okay… I’ll try to say a bit more. To be honest, I don’t know why I hated this so much but the whole thing just rubbed me up the wrong way. I can see it has some merit and a lot of this is probably just me being awkward as it’s obviously liked by enough people to have been voted into the IMDB Top 250. It does NOT deserve to be in a list alongside the “all-time greatest movies”, though.

I wouldn’t say that I don’t like a bit of black humor so I had no problem with that. But the whole thing was SO depressing. Every single character in this, other than Mary as a young girl, is completely unlikeable and some are downright hateful & horrible. As a young girl, Mary is so sweet. But she’s very lonely thanks to very neglectful parents (especially her alcoholic mother). The kids at school are horribly mean to her because she has a big birthmark on her head. She’s such a nice girl and I just couldn’t stand seeing this poor little girl being neglected and so in desperate need of a friend. 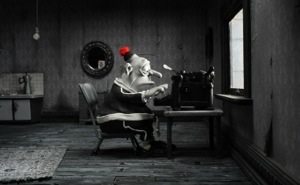 Then Max comes along and they have a great but oftentimes troubled pen-pal relationship due to Max’s many different issues (anxiety attacks, overeating, depression, and Asperger syndrome). He will sometimes get mad at Mary and she won’t hear from him for ages, which really hurts her. Her life is full of ups and downs (mostly downs!) and, as to pretty much be expected, she starts to descend into her own depression… Yada Yada. I won’t say whether or not this movie at least has a happy ending but who cares anyway – you’ll be lucky to not be severely depressed yourself by the time you make it to the end of this.

Um. Okay – I’ll say a couple good things. I liked that Mary’s world is sepia & Max’s is black & white. And there are, believe it or not, some quite funny things in this (I was just too depressed to give a shit). These were mostly things said by Mary or Max – I do admit that a lot of their correspondence was cleverly written and sometimes very funny. But this is one of those movies that’s too “aware” of its own cleverness. That sort of thing always gets on my tits. This film is pretentious. Oops – I was trying to say good things, wasn’t I… Mary. Mary as a girl. The only good thing, really.

Oh! And here’s another thing I hated probably more than anything else – this movie has now ruined for me a song that I loved: Penguin Cafe Orchestra’s Perpetuum Mobile. And it not only used the song once, it kept using it over and over and over again. The movie clubs the viewer over the head with this song. Annoying. Dammit – I can’t hear that song now without thinking of this movie!

Anyway – I suppose this film is making some sort of point about mental illness that maybe I missed. Maybe the point is how it can ruin people’s lives through no fault of their own. Because the lives in this film are certainly not happy ones. Here’s a list from Wikipedia of some of the themes covered in this film:

They forgot several things as well – such as agoraphobia, kleptomania, and alcoholism.

I hated this movie.

Now listen to this awesome song then never watch Mary And Max because it will destroy the song for you: