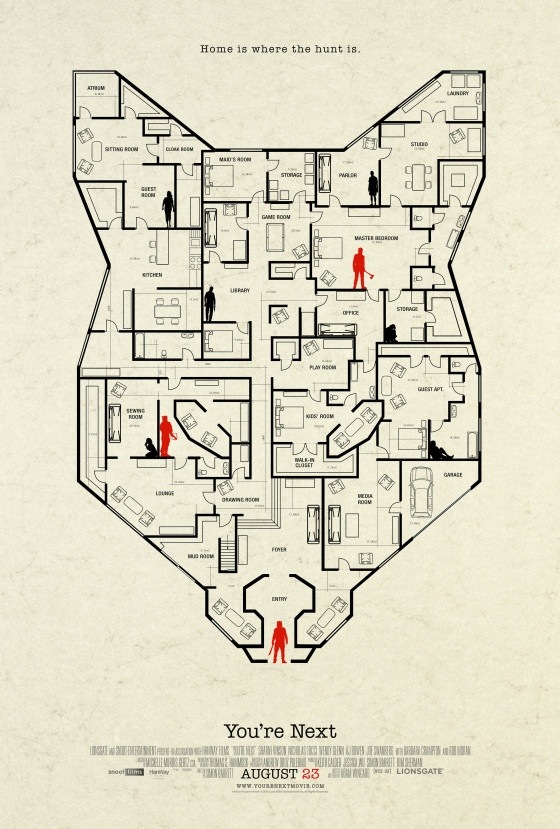 You’re Next (2011?? What? Apparently so… Looks like it spent a couple years at film festivals first)

The Davison family gathers at a remote house in the woods (as you do) to celebrate the 35th wedding anniversary of their parents. While celebrating, the family is attacked by a gang of masked invaders. 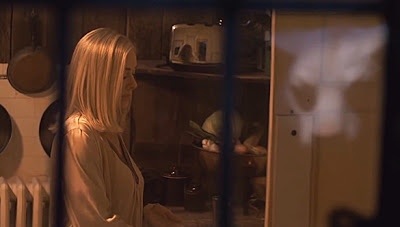 It’s been too long since I’ve gone to a movie (like, a month!). After spending the past couple of days catching up on reading all the blogs here, I read loads of extremely positive reviews for You’re Next (plus one blogger who hated it). So, even though I’m not really a modern horror fan and a massive wuss about gore, I said what the hell as it’s only 95 minutes long and went to it.

Now, I’m just back from this and still trying to collect my thoughts but figure I should get this review out there quick otherwise I’ll never get around to it. Normally I like to think about the film for a day or two. I’m not entirely sure yet how I feel about it. I think there are some good things about it but I was disappointed that there wasn’t even more dark humor than there actually was – from the reviews I read I thought there’d be a little more of that. What there was, I enjoyed (especially at the end).

I liked that there’s a strong female lead. I get bored with women in horror movies seeming to only be there to flash their tits and then die horribly. I suppose I liked some of the more “inventive” deaths but, not being a fan of gore or slasher flicks (other than the cheesy 70s & 80s ones), it was a bit hard to watch. And I didn’t exactly watch the screen the whole time! So… I suppose I’m not actually the best judge on just HOW gory it got. Certainly sounded rather, um… Juicy at times! Okay – I think it’ll be easier to just break this one down into what I liked and didn’t like so much…

– Like I said, a strong female lead who isn’t just there to show us her boobs.

– Some inventive deaths although really too violent for this wuss.

– Barbara Crampton played the mom. And she’s aged really well. The chick from Re-Animator! And Chopping Mall, which I love but shouldn’t. That kind of horror is more my speed… And, um, The Young & The Restless! I used to watch it when I lived in America, okay?! So sue me. :-p

– The animal masks were pretty cool.

– The dark humor but I wished there’d been more .

– The fact that the guy who directed a movie I just happened to watch two nights ago (Ti West – The Innkeepers) is actually in this. (I love IMDB). FYI: I preferred The Innkeepers to this.

– The length. Maybe bad for a film-lover to admit but I think horrors & comedies don’t need to be much more than an hour and a half long.

– The music at the end. It was a bit… I don’t know. Reminded me of The Thing with a little bit of Dawn of the Dead? I know too little about movie music to continue this discussion – just thought it worked well at the end of the film.

– The second half. I thought it started out quite slow and took a fairly long time to get interesting. But it really picked up speed about halfway through.

– Not enough of the dark humor – more would have made this one better. I’m not talking Tucker And Dale Vs Evil levels of humor (I loved that one – and it gives me a chance to link to a review of mine, I guess! Review HERE). But there’s so little that it almost felt out of place.

– Felt a little pointless (PART 1). We’ve seen home invasion movies a lot and others have done it better. It felt like a pretty standard home invasion flick but with more gore. It will be and probably has been compared to The Strangers, which I thought was better in terms of suspense & creepiness. Also think I preferred the film Ils (Them). And (I’m going to get in big trouble for this one and have a bunch of you horror fans yelling at me) I liked The Purge better than You’re Next (I won’t go into full detail on that now – my review is HERE if you’re bothered). The Purge at least had a great concept even though it wasn’t as well executed as it could have been. You’re Next has an extremely simple concept we’ve already seen many times but its execution was better than that of The Purge. So I guess it depends on what you prefer from a film…

– Felt a little pointless (PART 2). As far as the violence… I don’t always get as into violent films like these when the people don’t seem THAT horrible but we have to watch them die in awful ways. Other bloggers have said the family is unlikeable so it’s fun watching them die but, aside from a brother who comes across as a prick, they don’t really seem deserving of the excessive violence. But that’s probably just me – I’m not a fan of all the torture porn that’s around these days. You’re Next doesn’t fall into that category but the violence feels a little unnecessary at times. Or… Pointless. Not that every film (and certainly not every horror film) NEEDS to have a point. But… I don’t know what I’m trying to say so I’ll sum this up now. 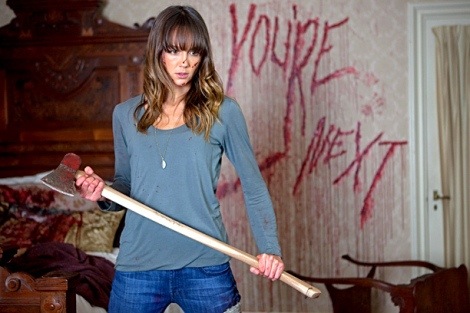 You’re Next is a pretty standard home invasion flick but with more gore, a couple inventive deaths, and a sprinkle of dark humor. Horror fans who love the more violent films of the genre will like this one. Luckily a strong female lead helps make up for some of the film’s weaknesses and the final half of the film is much stronger than what I thought was a pretty slow start. Overall I don’t think it’s a bad film – it’s a decent enough film for its genre but doesn’t feel as fresh & original as I was kind of expecting from the many reviews that I’d read. Maybe I’m just too picky these days?

**I suppose I’ve not even mentioned the other horror film that’s received lots of praise this year too – The Conjuring. Much more my type of horror and I feel it’s more worthy of the praise it received. Review HERE.