This review for the John Hughes Blogathon comes from Diane of Tvor Travels. Thanks for joining in on this, Diane! Let’s hear her thoughts on National Lampoon’s European Vacation. 🙂 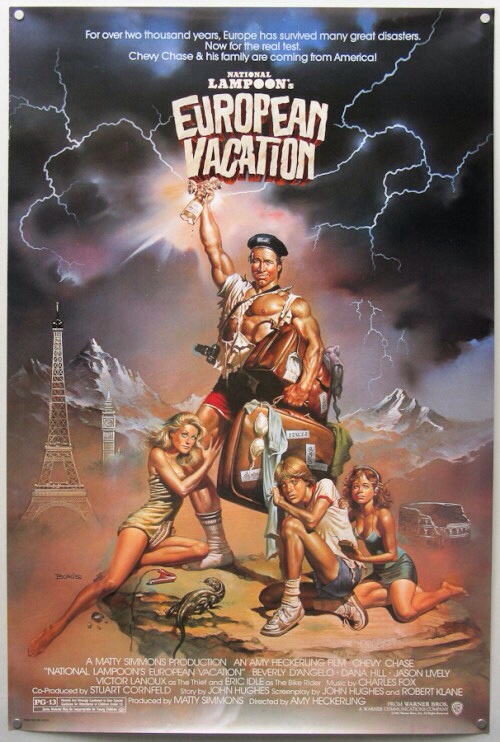 John Hughes was a force to be reckoned with back in the 80s in particular. He wrote so many wonderful films, many of them focusing on young people, “coming of age” type stories like Ferris Bueller’s Day Off, Sixteen Candles and Pretty in Pink just to name a few. But he also gave us some really good comedies,
family sitcom types like Mr. Mom and Planes, Trains and Automobiles, all featuring some of the funniest people on screen from that decade and into the 90s. In 1983 he introduced us to the Griswold family who set out to drive across country to a fabulous family theme park, encountering odd characters, odder relatives and one ludicrous situation after another. It was a huge hit so naturally, there was a sequel.

This is the second installment of the “Vacation” movies featuring the Griswold Family headed by Clark who’s well meaning but a bit of a bumbling doofus. But you know? He loves his family even if they’re not always grateful for it.

The movie opens up with the
Griswolds competing on a television game show called Pig in a Poke which they win when the answer to a question happens to be Clark’s name, uttered by his wife, foiling the all time winning family! Their prize is a vacation to Europe and we’re on the road again. Beverly D’Angelo again plays Clark’s wife, Ellen, and this time, Dana Hill and Jeremy Lively play the two teenage kids.

The Griswolds head off to Europe on a “luxury” grand tour but not before Clark and Ellen get frisky and video record their little session while trying out the brand new video camera, which by today’s standards is the size of a suitcase! That’s going to come
back to haunt them. Audrey the daughter doesn’t want to leave her
boyfriend for two weeks but Rusty, all hormonal as teenage boys are, just wants to get laid. But it’s a family vacation, by God, and we’re going to enjoy it!

The problem comes when none of the arrangements appear to be the
luxury level they were led to believe, from the grotty hotel rooms to the old rental cars. As always, Clark is so clumsy and confused that there’s a string of bruised bodies in his wake
including a British man on a bicycle they keep running into over and over everywhere they go. The bicyclist starts off being stereotypically polite, minimising his injuries and of course by the end he’s in a rage and he is played superbly by ex-Pythonite Eric Idle.

In London, there mistaken identities, driving on the “wrong” side of the road (that old chestnut!) and traffic circles that have them driving around the Houses of Parliament all day “Look, kids! Big Ben!” I still chuckle about that every time I see the famous clock tower now! In Paris, the language barrier means the whole family is the butt of the rude waiter’s jokes. In Germany while trying to find his relatives, of course they end up in the wrong house but are oblivious because they don’t speak German and then end up annoying the hell out of each other. Finally, in Rome, the
family become subject to yet another thief, the family isn’t speaking to each other and Ellen is splashed all over the
billboards as a “hot housewife” from *that* video, but they all pull together when danger threatens and you know they’ll end up forgiving each other by the time they head back to the U.S of A.

Clark waxes eloquent on all manner of subjects that make him sound officious and banal, ignorant and ridiculous but that’s the charm of Clark Griswold. Whether he’s oblivious of an insulting French waiter, knocking over ancient monuments, falling for a scam by a thief who runs off with their video camera (remember that naughty video?), shaking with frustration or ostracized by the family after one too many mess ups, you still like him. He’s
not one of life’s winners, but can he really be a loser when his heart is in the right place? When he just wants to spend time with his beloved family and keep to his precious schedule? When he wants everything to be perfect for them? You can’t help
feeling sorry for him at the same time that you’re laughing at him.

This is probably the weakest of the first three Vacation movies I’ve seen. I have not seen Vegas Vacation, the last installment but I’ve heard it would have been better left unmade. Unsurprisingly, John Hughes wasn’t involved in that one. It might have done better if he had been. It’s full of cliches, the “Ugly American Tourist”, that sort of thing, rather than original,
funny situations. I think the movie suffers from not having some of the excellent cameos and a really quirky secondary character that Clark can bounce off like Randy Quaid’s “Cousin Eddie”. It was partly filmed in London, Paris and Rome so you do get some
authetic city views which I always enjoy. The cameo with Eric Idle was brilliant, but that could be my fondness for all things Monty Python speaking here.

There are a couple of funny moments in this movie but it feels more forced and it’s not as good as the first one and the utterly brilliant Christmas Vacation which came next. Hughes redeemed himself there but Sequel Mania ruined more than one of his great ideas. I blame Hollywood. 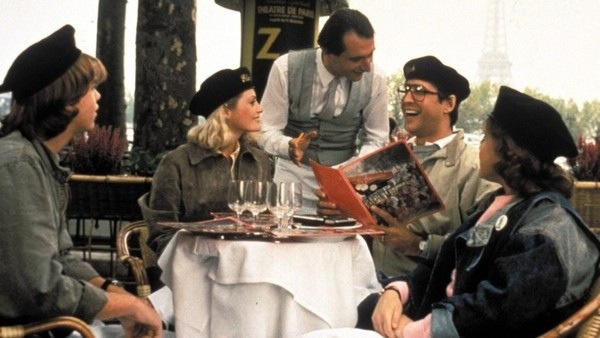