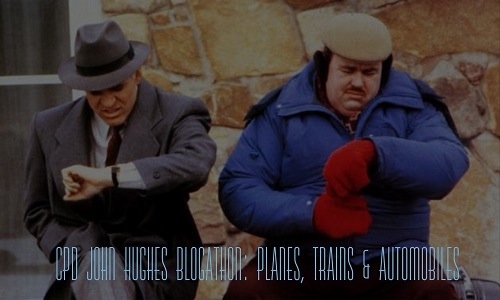 This guest review for the John Hughes Blogathon comes from Laura of Film Nerd Blog. Thanks for being a part of this, Lisa! Let’s see what she thinks of Planes, Trains & Automobiles. 🙂 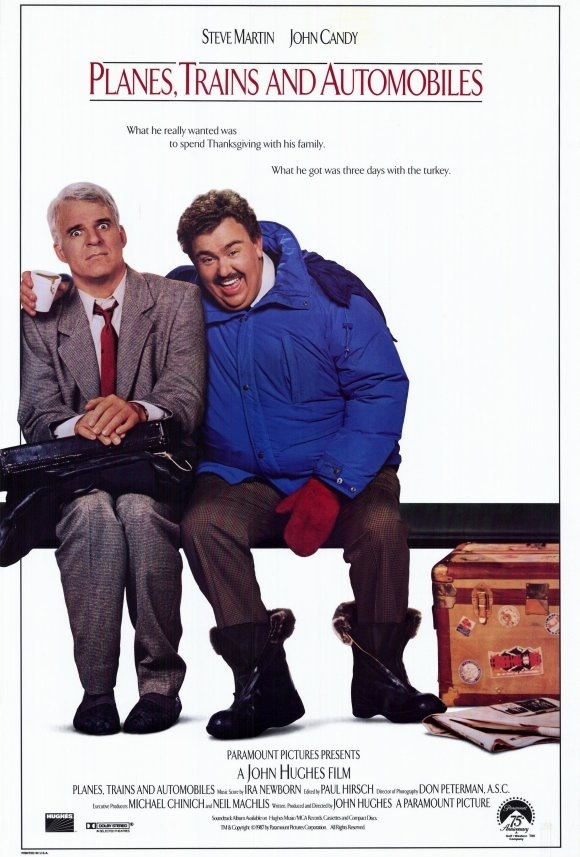 I’m going to put my cards straight on the table and say it’s really hard not to like Planes, Trains and Automobiles. This classic 80s comedy from the legendary writer-director John Hughes takes us on a journey (do you see what I did, there?), with two very different men, as they do everything they can to get home for Thanksgiving. ​

The two men in question are Neal (Steve Martin), an uptight marketing man, and Del (John Candy) a travelling salesmen, and when their flight fails to reach its destination thanks to bad weather, they must do whatever they can to get home.

Del really isn’t Neal’s kind of person. He’s chatty and jolly and doesn’t really have any concept of personal space or ‘boundaries’ which drives Neal totally crazy. He’s already wound pretty tight and just about everything Del says and does grates on him like nails down a chalkboard. Poor old kind-hearted Del consequently finds himself on the wrong end of Neal’s temper more than once and while we can see that he’s often wounded by Neal’s mean streak, he puts on a smile and continues to be himself.

“You wanna hurt me? Go right ahead if it makes you feel any better. I’m an easy target. Yeah, you’re right, I talk too much. I also listen too much. I could be a cold-hearted cynic like you… but I don’t like to hurt people’s feelings. Well, you think what you want about me; I’m not changing. I like… I like me. My wife likes me. My customers like me. ‘Cause I’m the real article. What you see is what you get.”

Planes, Trains and Automobiles is a deeply likeable comedy that also manages to successfully include moments of real, emotionally moving drama. It has Hughes’ stamp all over it with the mis-matched protagonists who, on the surface, have nothing in common, but ultimately find some common ground (remember The Breakfast Club?). And as is the case with each Hughes film I’ve seen, there are a number of iconic and memorable speeches, for example the ‘I like me’ speech, the ‘give me a f’ing automobile’ speech and the ‘you know everything is not an anecdote’ speech. The dialogue just zings.

The casting of Steve Martin and John Candy was a stroke of pure genius, and each plays his part to perfection. If only there’d been a sequel where they couldn’t get home for Christmas…