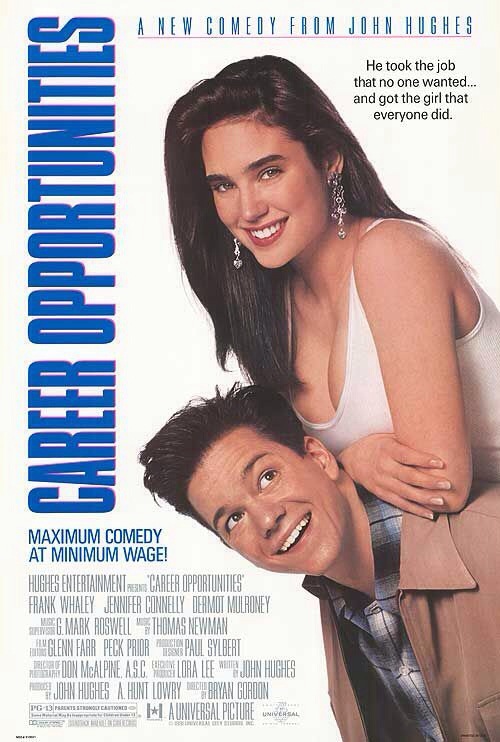 Plot Synopsis: (via IMDB)
Josie, the daughter of the town’s wealthiest businessman, faces problems at home and wishes to leave home, but is disorientated. Her decision is finalized after she falls asleep in a Target dressing room, and awakes to find that she is locked in the store overnight with the janitor, Jim, the town “no hoper” and liar. A decision to go to L.A. is established, but first they must get through the night. A relationship develops, only to be interrupted by a break in by two petty criminals. 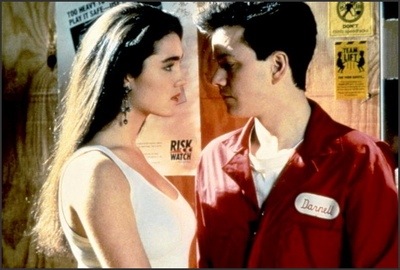 Okay. I suppose it’s about time I finally do another review for this big blogathon I’ve organized (as well as the review I did with Eric for Weird Science, which you can read HERE). I should start by reviewing all the John Hughes classics that I know & love so well. Truth is, I’m finding it hard to know what to say about those just yet so for now I’ll start with Career Opportunities. I’d never seen this one and watched it about a month ago specifically for this blogathon. The other films I plan to review are my favorites so I probably won’t be re-watching all but a couple of them. However, I also thought I should pick at least one I hadn’t seen at all. Hmm… Not sure if I picked the right one!

I hate to write a negative review for this blogathon. Clearly I love John Hughes and a lot of his films (especially the teen ones) are very dear to me. I picked this as it seemed like another teen one at least. Unfortunately, it has none of the charm of things like Sixteen Candles or the great characters of things like Ferris Bueller’s Day Off. I’d say the latter is the one that Career Opportunities is most trying to be. It feels as if Frank Whaley is trying to copy Matthew Broderick’s Bueller & Jon Cryer’s Pretty In Pink Duckie but he truly lacks that special something that both those actors brought to their roles. And he’s just not a very well-written character. He’s a bit of a loser who’s going nowhere with his life and you don’t really care if he succeeds or not. The same goes for Jennifer Connelly’s character. Again, I don’t think it’s a very well-written character as you don’t care at all what happens to her. She’s a spoiled rich girl who contemplates shoplifting to rebel against her wealthy father & miserable wealthy life.

So these two not-very-likeable characters end up locked in a Target store overnight & do fun things like ride around on roller skates and of course quickly develop feelings for each other until, out of the blue, two burglars show up (which feels completely pointless & out of place). Actually, the whole plot seems pretty pointless and I’m not sure if they even knew where to go with the story. It’s a really short film as it is – I guess they were just killing some time adding in a couple burglars (who felt a little like Home Alone’s bandits without all the fun slapstick, come to think of it). Meh. It’s not the worst film I’ve ever seen but, a month later, it’s shocking how little of it I even remember. 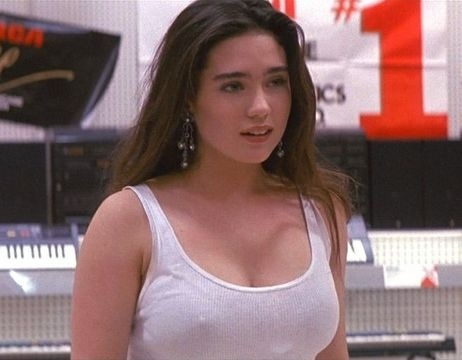 I will say this, and I’m not saying it to be immature or gain male followers (mainly I’m just trying to make this review a bit longer as there’s nothing else I can really say about this film): I never knew Jennifer Connelly had such big boobs! Seriously – they’re huge in this! (Also never fully realized that she DOES indeed have a unibrow – funny how girls didn’t worry about that in the 80s & early 90s…). Anyway, apparently guys have realized this (I’m a girl – I don’t tend to obsess over boobs) because all the pictures I could really find when looking for ones for this review were of her in the tight white top she wears.

Oh! And…. There’s a scene where she rides one of those toy horses you put money in and this is also apparently a well known scene amongst Internet pervs as there are photos & animated gifs of this all over the place! (She rides it in front of the burglars while trying to seduce them). She rides it a pretty long time for the film’s 83 minute long running time. So… this movie isn’t really worth watching AT ALL unless you’re a boy who likes to watch pretty girls with big boobs suggestively riding toy horses. *CPD sits back & watches the guest reviews of this one come pouring in from the male readers* 😉

**I’d just like to say that, even though this John Hughes Blogathon is going on, I haven’t stopped watching movies. So far, you can expect reviews from me in April for Night Of The Creeps, Bernie & Non-Stop. And of course more IMDB Top 250 Guest Reviews. As Non-Stop is a current film, I’ll give you my rating! Hmm… 5.5/10. So… Just a little better than Career Opportunities! But without the sexy big-boobed horse writhing, er… Riding. 🙂