This review for the John Hughes Blogathon comes from Rae of Fearsome 5 (& family!). Thanks for being a part of this blogathon, Rae! Let’s see what she thinks of 101 Dalmatians… 🙂

I’m so excited to be participating in the John Hughes Blogathon! I hate to admit (since this month is all about him!) I got on the Hughes train a little bit late. Better late than never right. Anyway, 101 Dalmatians, for which he did the screenplay, was definitely a favorite when I was younger and didn’t disappoint while watching again years later. 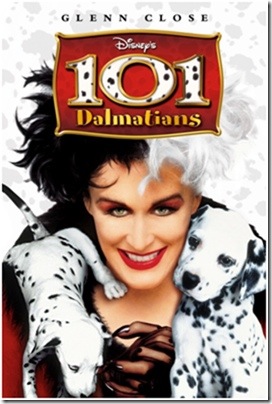 To start…this film is full of familiar faces: Glenn Close, Jeff Daniels, Joely Richardson, Joan Plowright, and Hugh Laurie. I felt they did a believable job playing the characters, which could be hard to do since almost everyone has seen the cartoon. It’s hard not to think about the cartoon while watching this, but this movie was really good in itself!

In case anyone doesn’t know, this movie is about a crazy, wild fashonista that kidnaps a crapload of dogs for the sole purpose of making a fur coat.
Glenn Close was creepy good as Cruella De Vil. Some of the silhouette shots of her laughing were spot on and oh so evil! She did great bringing one of my favorite villains to life. I mean, look at this lady… 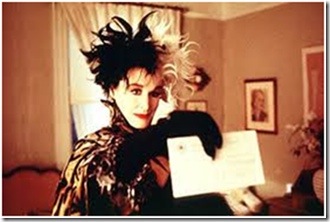 (Yikes! The hair totally reminds me of Edward Scissorhands…and also my hair on most days 😉 )

I was also surprised at how well the film works with real (and some animated/computer) animals. They were so well trained and seemed to convey emotion so well…how do they do that?! A lot of the film has no dialogue, just barking and animals running around, but it works. And they’re so cute J I was looking up pictures on IMDb and saw that 203 Dalmatian puppies and 20 adults were used for this film. After watching, I wish I could adopt about 20.

I’m not super big into slapstick comedy, and this movie had a lot of it. I’m guessing kids would probably love that though. At times, it felt sort of like watching Home Alone but with animals instead of Macaulay Culkin.

Some other interesting facts about this movie…

The actors had steak juice rubbed on their skin so the dogs would lick them. And Jeff Daniels had hot dogs rubbed all over his face to get shots like this. 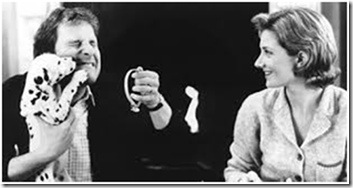 And, back to John Hughes, apparently he made more money from 101 Dalmatians than any other movie due to a piece of merchandising profits in his contract. (from IMDB)

All in all, this movie was a lot of fun! I enjoyed watching it again now almost as much as I did when I was younger. This is one the whole family could enjoy.

Thanks to Table 9 Mutant for hosting and to everyone for all the fun reviews-I love reading them all!!