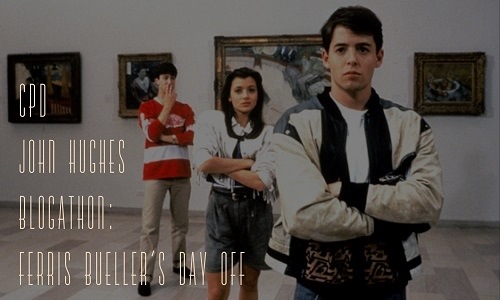 This review for the John Hughes Blogathon comes from Zoe of The Sporadic Chronicles Of A Beginner Blogger. Thanks for being a part of this, Zoe! Let’s, um, see what she thought of Ferris Bueller’s Day Off. 🙂

heathen
ˈhiːð(ə)n/
noun
derogatory
1. a person who does not belong to a widely held religion as regarded by those who do.

More commonly referred to as “Zoë”.

When Table 9 Mutant announced a John Hughes Blogathon I was like uhm, okay. I really wanted to be involved and I am not really familiar with his work, and this seems like a good way to figure some things out. I know that all and sundry is going to do Ferris Bueller’s Day Off, and I know that my selection was not really anything unexpected, but I figured that the best place to start with in terms of John Hughes’s work would be one of his most beloved and all time famous movies… a movie even I know about even though I have never watched. So here is just another one of numerous Ferris Bueller entries, but I can guarantee it will probably be one of the only (if not the only) reviews that does not jump about and sing praise for the classic film. 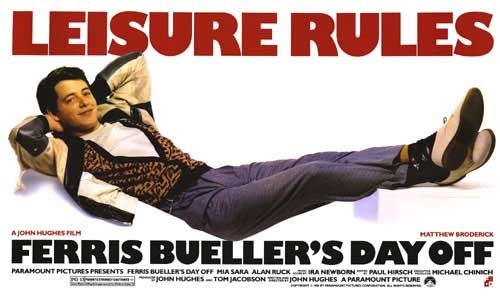 “Life moves pretty fast. If you don’t stop and look around once in a while, you could miss it.”
– Ferris Bueller

I won’t lie. I have been trying. I have been trying really hard and I have been unsuccessful. I know that the world loves this movie, I know that everyone is a huge fan, that everyone has faith and adores it and it has cult status and all that, but I am not a fan of Ferris Bueller’s Day Off. Maybe it is because it is too 80s? Maybe because it is freaking ridiculous? I don’t know. I really don’t. I didn’t find it to be funny or memorable or charming, and Jeanie (Jennifer Grey) truly grated on my absolute last nerve from the off. What a resentful, bitter bitch! Dean of Students Edward Rooney (Jeffrey Jones) was ludicrous, and I cannot ever imagine someone having such a hard on for one student (and I went to school with some serious chops in my life). The premise was silly, and it is called a coming of age film… how?! The most he did was bunk a day and excuse it later by saying he needs an off day in his life with his friends before they all go their separate ways… how does that even work? We call them weekends… but whatever. Not saying we don’t all need to put in that one false day every now and again for sanity’s sake, but this really just didn’t come together for me nicely.

“It could get wrecked, stolen, scratched, breathed on wrong… a pigeon could shit on it! Who knows?”
– Cameron Frye

I was not a fan of the acting at all (though Matthew Broderick gave a fantastic performance, he played that self-assured and overly cocky teenager very well), I didn’t enjoy the events, and I have never seen someone plan a day to bunk that well in my life, and I met some people who were pretty creative. I know it isn’t supposed to be too serious and all that, but I didn’t find it light-hearted and fun, either. It was just boring, plain and simple. It didn’t reel me in even remotely. The movie itself is only like an hour and forty minutes, but it felt like a century to me. I even had to watch this movie over two sittings. That peeved me!

“The place is like a museum. It’s very beautiful and very cold, and you’re not allowed to touch anything.”
– Ferris Bueller

I didn’t really feel that there was any real character growth. I mean sure, Cameron Frye (Alan Ruck) finally grew a pair in terms of his jackass dad, but we don’t actually see anything come to fruition from that, which was disappointing. Then there is Jeanie, who gets two words from druggie Charlie Sheen, and all of a sudden she is over hating Ferris, but gung-ho on helping him? People don’t let things go that quickly, and she has always despised her brother for getting away with everything all the time. Not to mention, how freaking retarded were the Bueller parents?! Tom (Lyman Ward) and Katie (Cindy Pickett) were preposterous and stupid and silly, and how do you blow off your daughter and believe your son in an angel? I mean I know how that happens, but it is like they didn’t even have the time of day for her, and I think that just irritated me (thinking about parents and favouritism among kids and all that). I know some parents are love blinded by their kids, but this just tells me they had the intellect of a pea!

“In a nutshell: I hate my brother.”
– Jeanie Bueller

Alright, I am going to stop bitching now. There were some things that were pretty cool about the film I suppose. You will have to find that in everything. Cameron kicking the shit out of his dad’s Ferrari, so worth it. The massive (though completely inexplicable) town party was cool, even though it was strange how it all joined together for the film. I have always only caught scenes of it over the years, and those never really impressed me, so I figured maybe if I watch it all then I will understand the hype and cult status and lurve… nope. I really wanted to like this movie, I truly did. Instead I am going to have to go with having totally missed it here. This was not even like a teen feeling movie, but something for kids.

“Ladies and gentlemen, you are such a wonderful crowd; we’d like to play a little tune for you. It’s one of my personal favorites and I’d like to dedicate it to a young man who doesn’t think he’s seen anything good today – Cameron Frye, this one’s for you.”
– Ferris Bueller

Alright, moment of truth… overall I will be nice about it and score it a 5.5/10. Well, T9M, I am really sorry. I know you love yourself some Hughes, but this just didn’t work for me in the slightest. Maybe my next endeavour will impress me more!