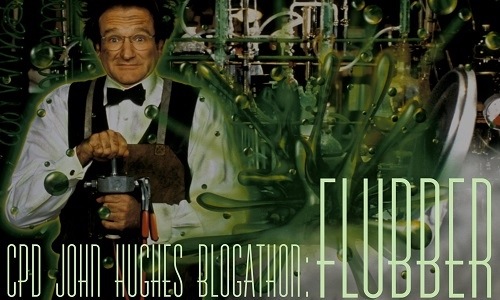 This review for the John Hughes Blogathon comes from Rob of MovieRob. This is his second review after Home Alone. And he intends to do many more! Thanks for being so excited about this blogathon, Rob! Now let’s see if he liked Flubber. 🙂

Brief Synopsis – An absent minded professor creates a new substance and wants to use it to save his college from being closed down.

My Take on it – In general, I’m not much of a fan of remakes and this one is not an exception to that rule.

As I kid, I recall seeing the original Absent-Minded Professor (1961), and my memories at least make it better than this one was.

I was soooo bored during this movie even though it had Robin Williams with his exuberant energy throughout. The effects (even for 1997) were atrocious. Apparently there wasn’t much of a budget for this movie in order to make it seem like it was made in the 90’s and not in the 60’s or 70’s.

This movie also gave off the feel and vibe of possibly being a made for TV movie. Besides the special effects, everything just seemed really dumbed down that it seemed like a movie of the week and not a feature film.

There is little to no chemistry between the characters. Williams is suppose to be madly in love with Marcia Gay Harden, but I felt absolutely nothing for them and the fact that she was ready to marry someone else if Williams forgot again to make it to the chapel on time.

Wil Wheaton is horribly cast as a sniveling rich kid who tries to do mean things because Williams is threatening to flunk him and it doesn’t work. He will always be the goody-two shoes Wesley Crusher in my eyes and every attempt to put him elsewhere just doesn’t work. I recall seeing him in Toy Soldiers (1991) as a gangsters son and he was also way outta place there.

This was one of Hughes worst screenplays IMHO. Stick to the original with Fred MacMurray.