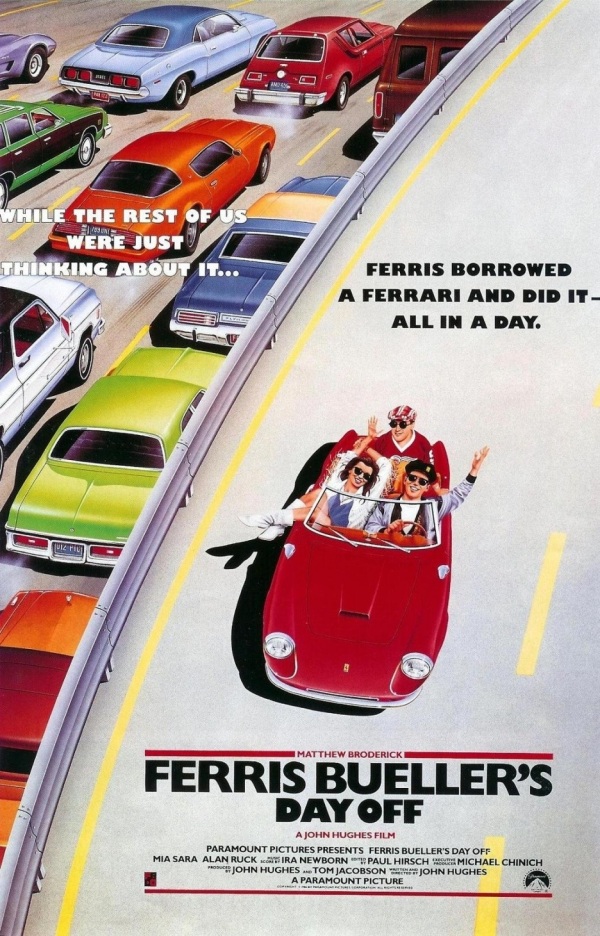 Ferris Bueller’s Day Off (1986) by ME, Cinema Parrot Disco! Finally writing some reviews!

If you’re my age, there’s a 90% chance that you love Ferris Bueller’s Day Off. (Disclaimer: I pulled that statistic out of my ass). Although, personally, this is probably my third favorite Hughes film, I do think it’s his *best* film. The character of Ferris Bueller is possibly his greatest creation (and he created LOTS of memorable characters). Who wouldn’t love to be like Ferris? So carefree & living life to the fullest. As he famously says: “Life moves pretty fast. If you don’t stop and look around once in a while, you could miss it”. For a teen film, that’s actually a pretty deep & meaningful statement said in such a simple way. Everyone knows it’s the way we should ALL be living our lives yet so few of us remember to. I’ll admit right now that I’m a Cameron, not a Ferris. I don’t want to be a Cameron and everyone knows you should NOT be a Cameron. So why are there still so many of us in the world??

So Ferris and his girlfriend and his best friend take a day off of school & spend the day doing various things around Chicago. So what? Well, what do YOU do when you decide to fake a sick day? I doubt many of us manage to do half as much as Ferris & co. Hell, I’d probably just mope around the house all day the way Cameron would choose to if Ferris would let him. Ferris lives LIFE and even the simplest things, like going to an art museum, are treated as something fantastic & beautiful. And call me sappy if you want but the museum scene with the magnificent Dream Academy version of The Smiths’ Please Please Please Let Me Get What I Want is an absolute classic. It’s beautiful & it’s moving and this is from a film aimed at TEENS.

That’s what I loved about John Hughes – he treated teenagers as human beings with feelings and deep emotions and BRAINS. Now that I’m far (far… FAR… Oh, so damn far!) from being a teenager, I’ve forgotten what it’s like to be one and, as Allison from The Breakfast Club would say, my heart has died (in some ways…). Ferris Bueller’s Day Off gave us teens that, upon first glance, just wanted a “day off of school” but, by the end of the film, we realize that these teens skipping out on a day of school want the same thing all of us want: To find joy in the little things and to simply live each day as though it’s our last (which sounds corny & obvious but I’m not a good writer like Hughes – he said it much better with the “Life moves pretty fast” line). In this movie, it’s a coming-of-age thing as the three of them think about what they’re going to do with their lives outside of high school and you can tell that even Ferris is a little scared. This theme works just as well for any generation and any big life changes we experience: marriage, birth, death… I think this is a big part of the reason why Ferris Bueller’s Day Off remains so well loved even today. The clothing styles may change but the themes are timeless. 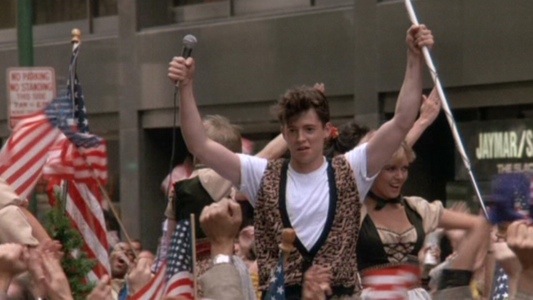 Um, that was all almost deep for me! I didn’t even really discuss any specific things from the movie. The characters are very strong as are the actors and there are so many great lines, funny moments, and excellent song choices (as I’ve said before, John Hughes really knew how to choose the right songs for his films). But there’s really no point discussing the specifics anyway – most everyone has seen this film by now or at least knows some of the more famous scenes. I love that it’s John Hughes’ “love letter to Chicago” as well as I grew up not terribly far from there and have had a bit of a “Ferris Bueller’s Day Off” day in Chicago (but not fully – yes, this IS something I plan to do someday). The overall theme I discussed above isn’t enough to make a movie – it’s the combination of that plus the characters Hughes created here and his writing and the music and the humor and just… EVERYTHING coming together and being so RIGHT. That’s why Ferris Bueller’s Day Off is loved by so many, including me, and why it’s a CPD Classic.