This review for the John Hughes Blogathon comes from Laura of Film Nerd Blog. She liked Planes, Trains & Automobiles – Let’s see what she thought of Sixteen Candles. 🙂 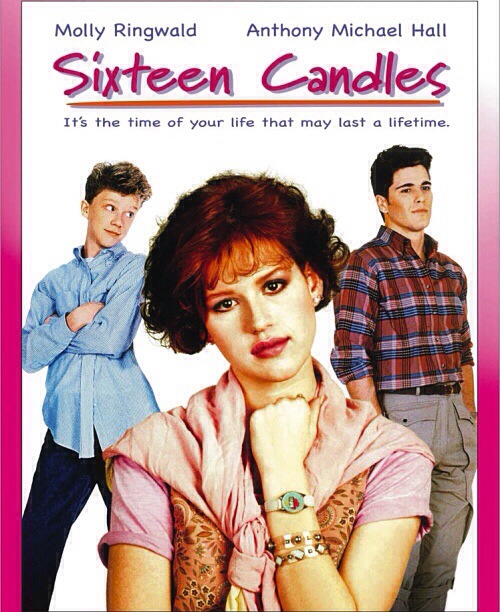 Ah, John Hughes. Acclaimed writer and director of a plethora of modern classic films. You’ve given us so many fabulous films over the years…Home Alone: Uncle Buck: The Great Outdoors: Planes, Trains and Automobiles: Ferris Bueller’s Day Off: Pretty in Pink and The Breakfast Club to name a few. But before all of these there was Sixteen Candles.

I’ve only just seen this for the first time – I have no idea how it’s eluded me for so long – especially as I’ve such a soft spot for Pretty in Pink and The Breakfast Club. Unfortunately, I think the delay has had a profound effect on both my enjoyment and my opinion.

Sixteen Candles opens on teenager Samantha Baker, played by Hughes stalwart and flame-haired 80s legend Molly Ringwald, on the morning of her sixteenth birthday. She’s excited to reach her sweet 16 although she’s a bit disappointed that she hasn’t [ahem] physically matured over night. What the hell though, the ‘rents will be waiting to lavish love and generous gifts on her, right? Wrong. Imagine her chagrin when she realises her whole family has totally forgotten her birthday.

The rest of the film is, on the surface at least, a sweet little coming-of-age comedy, where our petulant heroine finds herself the centre of a love triangle. On one side there’s the resident stud-muffin she has the serious teenage hots for, and on the other is the young nerd who has the hots for her.

Now, perhaps its because I’m watching this for the first time at the ripe old age of 32, but there were some elements of Sixteen Candles that really bothered me. Firstly, Jake Ryan, the aforementioned stud-muffin. He has a girlfriend and yet can’t wait to get together with Samantha behind her back. Ok, so maybe I’m taking it too seriously. This is aimed at teenagers, after all, and they aren’t exactly known for their sensitivity.

The thing that really gets to me is that there are some parts that are just a bit, well, rapey. Jake virtually donates his drunken girlfriend to the young nerd, and gives him the green light to do whatever he likes to her. Now, this just makes me feel icky. And while there’s no denying that Jake is a fine looking young man, he has about as much charisma as my favourite pair of slippers and I can’t help thinking that Samantha would’ve tired of him soon after the credits rolled.

In spite of these complaints, I quite enjoyed Sixteen Candles. I love Hughes’ style; it makes me nostalgic for an era I’m not actually old enough to recall. The casting is integral to the enjoyment of his films, and this one is no different- Ringwald makes for an excellent moody teenager while Hall was born to play the annoying try-too-hard nerd. And the characters, while sometimes crudely drawn and stereotypical, are often endearing and almost always totally engaging.