Plot Synopsis:
John Candy plans to enjoy a nice vacation with his family but his annoying in-laws show up & ruin everything.

I watched this the other day just in case I needed to review it. Then the lovely Smash reviewed it for me (she’s awesomely hilarious so you should just go & read her review instead of mine. seriously – I suck). 🙂 So I wasn’t going to review this. But then I remembered way back to December 2013…. You see, I started this blog at the end of 2012 & then kept a very anal list of EVERY movie I watched in 2013 (list HERE). Then, by December 2013, I suddenly went a bit mental & decided that I NEEDED to review every freaking one of those 2013 movies that I’d watched and I think I still had about 12 or so un-reviewed (that’s probably not a word). So I quickly cranked out 12 or so shitty reviews. So to save myself that same panic come December 2014, I better review this fucker now! (Yeah – I’ve started a 2014 list. Here it is! I’m already behind!) 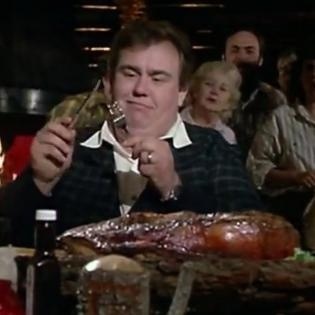 I’m glad Smash loved this movie. I can see why. It’s the type of movie where, if you saw it at the time and pretty much grew up with it, you’ll have fond memories of it. I did see it years ago but only once and I didn’t remember too much beyond the waterskiing scene. Having re-watched it again for the first time in years, I’m afraid to say that it hasn’t aged that well. To compare it to other Hughes movies, I’d say it especially hasn’t aged well compared to Planes, Trains & Automobiles or Uncle Buck, both of which I think many people would still enjoy today even if they’re watching them for the very first time. The Great Outdoors was 1988 but something about it makes it feel even older than that. I’d say that even the first two Vacation films feel a bit more “fresh” than this one. (Sorry – don’t hate me! It’s still a fun movie and, as I said, I can understand why some would be very fond of it).

The characters: John Candy – loveable as always. Dan Aykroyd – fine. as Dan Aykroyd-y as always. The kids – fine, nothing special (but I did like how the twin girls were a bit like The Shining twins). The wives – fine. Annette Bening’s character was a little annoying. Umm… Oh! Lucy Deakins – She’s a cutie. I don’t know why she wasn’t in more stuff. Here’s an embarrassing confession (luckily, no one reads my reviews anyway. ha!) – I LOVE a little movie she was in called The Boy Who Could Fly. That movie ROCKS! And the boy in the title was played by Jay Underwood, who also played Bug in Uncle Buck with John Candy! There you go – six degrees of Kevin Bacon (who was in Planes, Trains & Automobiles with John Candy who was in The Great Outdoors with Annette Bening who is married to Warren Beatty who has had sex with most of Hollywood which will somehow also connect him to Kevin Bacon and where the fuck am I going with this?!).

I’m tired. The Great Outdoors is dated but John Candy is in it and we all love him so who cares. The Vacation films are better. As is Planes, Trains & Automobiles. And Uncle Buck. And Home Alone. And all of the teen John Hughes movies. But it’s better than Baby’s Day Out!