Plot Synopsis: (via Wikipedia)
The Breakfast Club storyline follows five teenagers, each a member of a different high school clique, who spend a Saturday in detention together and come to realize that they are all more than their respective stereotypes, while facing a villainous principal. 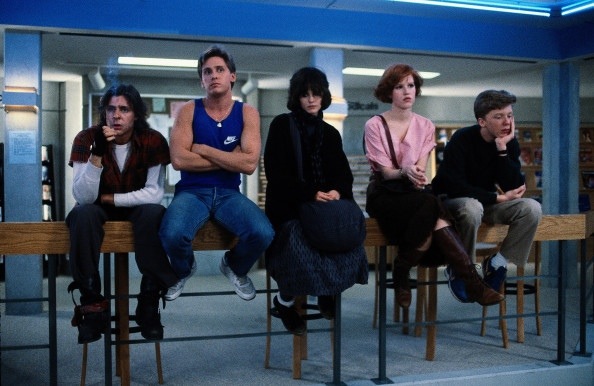 I figured I should end this blogathon with my review of my very favorite John Hughes movie: The Breakfast Club. So don’t worry everyone – THIS IS THE FINAL REVIEW OF THE JOHN HUGHES BLOGATHON. (Unless I quickly watch the DVD I just received in the mail). 😉

As always, I struggle the most when writing about the films that I really love. What is it about The Breakfast Club? Why do so many people of my generation hold this movie so dear? (And some from a whole new generation. Or two. Or three. HOW many generations have there been since I was a teenager?? Man I’m old…). All I know is that we have John Hughes to thank for it. The actors chosen all did a great job and everything but it’s the writing of John Hughes that really spoke to teenagers everywhere. And he’s never been bettered. Why can’t they make teen movies like these anymore?

For me, I could really relate to The Breakfast Club because it felt EXACTLY like my high school. My high school was also very small, in the Midwest (not far from where the fictional Shermer, Illinois would be), and it was full of cliques. And the thought of a group of teens from these different worlds coming together and finding that they had a lot more in common than they realized was such a lovely thought. Okay – I’m not completely sure how realistic THAT was but it was still great watching the relationships develop between the characters in this movie.

Most of all, it was seeing that each of these teens had their own problems & fears (even the popular princess & the athlete!). And having five such different characters meant that every teen watching would be able to relate to at least one of them. Me? I was a combination of the basket case, the brain, and a tiny bit of the princess. My boyfriend was the criminal (Totally. He even looked a bit like John Bender). So the one I could relate to the least was the athlete (But this was probably the largest social group in my school. Stupid sports! I sucked at sports. I had no chance of being popular!). Well, I was a cheerleader. Shh – don’t tell anyone that. How freaking embarrassing… Rah rah rah and all that bullshit. Blech!

The Breakfast Club “spoke” to me as a teenager the way it did to countless teens then and even to some of them today. It made me feel like maybe I wasn’t so different after all. We all have the same thoughts and fears and we all just want to belong, whether we admit to it or not. John Hughes knew exactly what was in a teenager’s heart and mind and was able to beautifully capture this in the teen movies that he wrote. This is the most apparent in The Breakfast Club, which is why it’s my favorite John Hughes film and a CPD Classic.