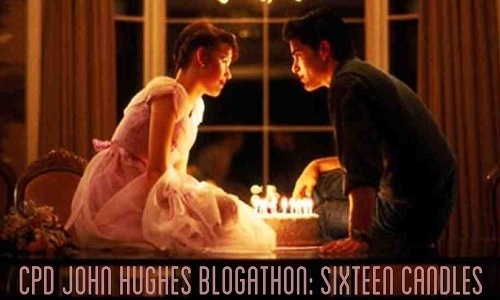 For this final guest review for the John Hughes Blogathon, we have Eric of The IPC – the guy who inspired me to take on this crazy project that ended up being way bigger than I ever could have dreamed. And it’s all because I decided to pick on him one day for being a teenager in the 80s yet not watching all the 80’s John Hughes teen films! Thanks for being such a good sport through all of this Eric (but, REALLY? you REALLY didn’t like Uncle Buck?! Man…). Anyway, I adore Sixteen Candles (and I reviewed it as well too right HERE. PLUG!). So let’s see how much Eric suffered while watching the true Hughes classic Sixteen Candles. 🙂

When Cinema Parrot Disco first approached us with the idea of this blogathon, I was hesitant about watching some teen movies from my teens that I had never had any desire at all to see but I happily volunteered and ordered up a few of these. If you read what I did on The Breakfast Club, you might remember that I didn’t care for it too much so I was NOT excited about popping in this one and sitting through it. But I did because I am a man of my word and I do what I say I will and I am a completist and all of that shit and what can I say but I actually liked this and thought it was pretty fucking funny. “Candles” was a little bit more saucy than “Club” coming in with a set of boobs, some cussin’ and even some implied sex. WHAT?

Speaking of Breakfast Club, there’s something I forgot about when I was writing my piece the other day. There’s a scene late in the movie where everyone fucking gets together and smokes some dope and bonds like they’re a bunch of hippies in some commune. After smoking some weed, the jock (Emilio Estevez) goes running around the library like he’s on PCP, screaming and dancing and he might have ripped his shirt off – I forget. But I remember watching that scene and thinking – WHAT THE FUCK? I’ve smoked some grass in my days and not ONCE have I ever had the desire to go running around anything or screaming or dancing. In fact. I’ve acted up MUCH less on The Pot than when I’ve had a shitpot worth of cocktails. READ: seven Long Island Iced Teas = running around my city naked; a hit off a 4 foot bong = sitting on the couch watching FEAST trying to remember my name.

Anyway… so SIXTEEN CANDLES is pretty funny. Really. I LOLed quite a few times. I noticed though, one thing that really bothered me and when I went looking for pics of this on the internet I can’t believe that I couldn’t find a picture of this…. somewhere after the credits, Ringwald is taking the most inappropriate test that could possibly be imagined in a public school setting but – at the top… there’s this….! 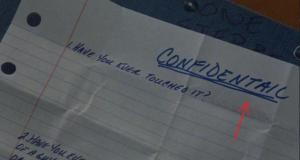 Sorry for the poor graphic arrow but what the FUCK’s a CONFIDENTAIL???? Is that the rear end of your best friend and confidante? How did the filmmakers miss this? What kind of teacher would ask that first question?? Oh well – who hasn’t seen this except for me? It’s your typical coming of age teen movie where the chick gets the guy of her dreams in the end and the dorky guy gets laid. In between there’s a bunch of zany shenanigans and all of that, including a Chinese foreign exchange student. One of the funnier lines of the movie? Chinese dude eats a quiche for the first time ever and really loves it. “How do you spell this word ‘QUICHE’?” he asks sporting a shit eating grin. “You don’t spell it son,” says the grandpa. “You eat it.” LOL HAHAHAHAHAHA