Plot Synopsis: (via Wikipedia)
In 1882 in the town of Old Stump, Arizona, cowardly sheep farmer Albert Stark (Seth MacFarlane) is dumped by his beloved girlfriend Louise (Amanda Seyfried) as a result of his withdrawal from a duel. Meanwhile, infamous outlaw Clinch Leatherwood (Liam Neeson) robs and kills an old prospector for a nugget of gold. He orders one of his men, Louis (Evan Jones), to escort his wife, Anna (Charlize Theron), to Old Stump to lay low while he continues his banditry.

Here you go – review number 2 of the 4 movies I watched all in one day at the cinema last week! 😉 (You can read my Edge Of Tomorrow review HERE).

As I said in my review of Neighbors, I don’t like many comedy movies. I’m picky on comedy & don’t find that many movies funny (especially nowadays). However, Neighbors wasn’t TOO bad – it was a bit of a pleasant surprise. And I like a lot of Seth MacFarlane’s stuff. I admit I’ve seen very little of Family Guy (even though I’ve liked what I’ve seen) and I loved Ted – it was very high on my list HERE of favorite 2012 movies. A Million Ways To Die In The West doesn’t live up to Ted and, in fact, I think I liked Neighbors more. But it’s still full of some hilarious stuff & I definitely had a fun time. 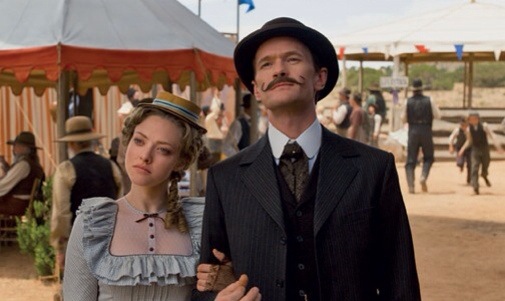 If you like Seth MacFarlane, you’ll definitely like this film as it’s very much his type of humor. There are some intelligent observations, witty one-liners, movie references (one of which is BEYOND awesome and gave the biggest audience reaction by far), but still enough juvenile poop humor & sex jokes to keep a variety of filmgoers happy at least some of the time. Poop humor doesn’t do it for me (sorry, Eric!) but I’m still not about to act all snobby as I admit that all the absolute filth that came out of Sarah Silverman’s mouth in this cracked me the hell up. Complete & utter filth! Hilarious. 😉

You know – I don’t know why I’m still talking (er… typing). If you like Seth MacFarlane, you’ll like this. If you don’t, you won’t (at least, I think it’s highly unlikely you will). That’s it. I think he’s funny, I actually love Sarah Silverman most of the time (I know she’s not for everyone), Neil Patrick Harris is clearly having loads of fun hamming it up as the bad guy, and I thought Charlize Theron was very very good as the most straight forward & sensible person in this. She actually has really great chemistry with MacFarlane & their scenes together where they just chat about simple things were fun to watch & felt very natural (even though Theron is like A Million Ways Too Hot For MacFarlane – think that was wishful thinking on his part when he (I assume) cast her. Lol). This movie feels like a series of (admittedly funny) jokes that had an overall pretty weak story written around them. It’s no Ted – that one felt much more “together” and was overall a much funnier film. But there were still enough laughs in A Million Ways To Die In The West to keep me smiling throughout. 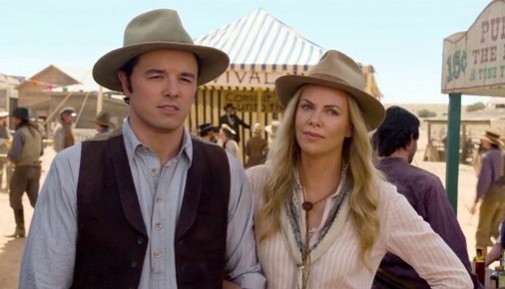