Today’s IMDB Top 250 Guest Review comes from Mark of Marked Movies. He’s also reviewed Heat (HERE) and Argo (HERE) and The Big Lebowski (HERE). Thanks for all the reviews, Mark! 🙂 Now let’s hear his thoughts on Trainspotting, IMDB rank 151 out of 250… 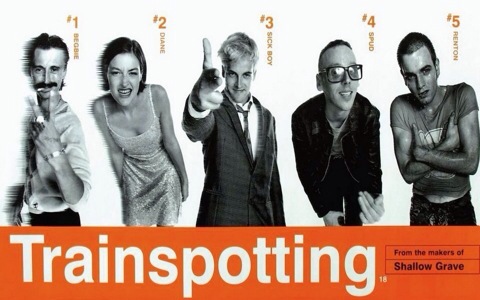 Director Danny Boyle’s marvellous debut “Shallow Grave” was always going to be a hard act to follow but to attempt an adaptation of the ‘unfilmable’ Scottish novel “Trainspotting” by Irvine Welsh, seemed like lunacy. Boyle, however, captures Welsh’s book brilliantly and despite “Slumdog Millionaire” gathering him a best director Oscar, this still remains his best film.

It follows the lives of a group of friends from Edinburgh as they experience the high’s and low’s of life through heroin use. Renton (Ewan McGregor) decides to go clean and rid himself of his affliction and his low-life chums but finds that’s easier said than done. Spud (Ewen Bremner) is too needy, SickBoy (Jonny Lee Miller) is too controling, Tommy (Kevin McKidd) has just taken some bad direction and Begbie (Robert Carlyle) is just plain pychotic. Renton, however, enters into making a one off drug deal with his old pals, so as to make a new life for himself altogether.

Boyle’s film has often been criticised as glorifying drug use. Glorifying drug use? Really? People who believe this must have been watching a different film. The characters involved all behave despicably. They are responsible for thefts, fights, deaths – including the death of a baby. Get imprisoned. Contract HIV. Ruin their lives and others’, all because of their drug habit. What this film has in depth, vibrancy and fun, is the reason it could be mistaken for being pro-drug use but having these qualities is more of a testament to the filmmakers involved, in making a bleak and depressing subject matter, very entertaining. The characters are extremely well written (kudos to writer Welsh) and acted by an ensemble of excellent actors. It made a star of Ewan McGregor, who’s character, although likeable – and brilliantly played – is essentially the person responsible for the downfall of many of the other characters. Notable other performances are Ewen Bremner as “Spud”, the most endearing of the group and a character too gentle for his lifestyle. The best of the bunch though, is Robert Carlyle as the psychotic “Begbie”, who’s choice of drug isn’t heroin but violence – and he’s just as destructive with it. He’s a dangerous and highly volatile person and Carlyle perfectly captures the on-edge feeling of his terrifying unpredictability. It’s an award worthy performance that was sadly overlooked. Everything about the film reeks of class. From it’s rollicking soundtrack, to the rich, snappy dialogue, with great characters in hilarious situations and kinetic fast paced direction. This film has everything going for it and stands as one of the finest films of the 1990′s.

A relentlessly energetic experience that leaves you craving for more, much like the habit of it’s protaganists.
Pure uncut, Class A.