Based on Odd Thomas by Dean Koontz

Plot Synopsis: (via IMDB)
In a California desert town, a short-order cook with clairvoyant abilities encounters a mysterious man with a link to dark, threatening forces.

Well, I have to use the word: This movie is certainly “odd”. It’s also not exactly “good”. However, I kind of liked it and am going to have some affection for it since I read A LOT of Dean Koontz books. Odd Thomas is one of his better books and certainly one of the best characters he’s created. Which is why I suppose there’s a load of Odd Thomas books now… When did that happen?! I only knew of three. I read the first two and bought the third (which I then lost and still can’t find anywhere – I need to find it so I can continue!). Anyway, the first book IS really good and this movie doesn’t capture how great the characters are but I appreciate that they made the effort. At least it sucks less than most the other truly awful Koontz adaptations. 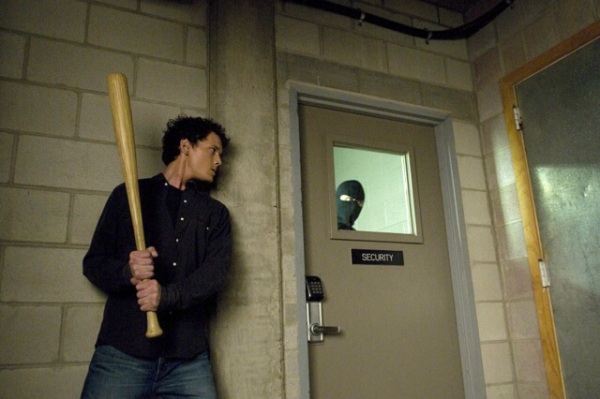 I’ll be honest – if you’ve not read Odd Thomas, I don’t recommend this movie. If you’ve read it, I think you’ll at least enjoy seeing Odd Thomas (the character – it’s his actual name) onscreen and I did really like Anton Yelchin as Odd even though he’s not exactly what I’d pictured. I’ve liked Yelchin since the underrated Charlie Bartlett & think he has the right sort of quirkiness to play Odd. Addison Timlin was also good as his girlfriend Stormy Llewellyn and they had a very nice chemistry together, although they came nowhere near capturing the relationship as well as in the book (through no fault of their own – you’re just never going to get as much character development in a movie). The humor in the movie feels a little out of place and just doesn’t work the way it worked so well in the book. And then there’s the strange “supernatural” stuff… Well, it comes across as quite cheesy in the movie and, if you’ve not read the book, I think you might laugh at those bits. To be fair, I think it’s probably very hard to get a Dean Koontz movie “right” onscreen. Well, they’ve managed to make some Stephen King stories into excellent films but I suppose he’s more well known and those movies probably have a bigger budget. Odd Thomas feels like a made-for-TV Stephen King movie, basically. I watch EVERYTHING Stephen King-related and know there’s been some truly dodgy adaptations of his work but I still enjoy watching them. I felt exactly the same way watching Koontz’s Odd Thomas. By the way – I think the girl playing Odd’s girlfriend was truly adorable:

But I’m not sure how necessary THIS shot was:

First of all, I highly recommend reading Odd Thomas by Dean Koontz if you at all like supernatural fiction with a bit of horror. He’s Stephen-King-lite. I have a strange relationship with Dean Koontz – his books are an “easy read” and I devour them then totally forget about them but, occasionally, I love one. My favorites are Twilight Eyes & Watchers but Odd Thomas would be close to the top of the list as well, especially as I think it’s one of Koontz’s finest endings for a story as well as one of the best characters he’s created. The movie handles the ending fairly well, which I was worried about them getting right. I think there are some changes from what I remember of the book but nothing that bothered me too much as it was more important to get the characters right and I think the movie did a decent enough job of achieving this. You’ll like it okay if you’ve read the book but you probably won’t if you haven’t (unless you’re not bothered by a low-budget sort of feel). Read the book. THEN watch the movie. Then read a few more Dean Koontz books. Then watch Charlie Bartlett.

I did it! I’ve managed to review movies based on books all week! I’ll attempt to do another tomorrow but at this point don’t have anything written yet. I may do Paperhouse – that was an “odd” film as well! Either that or The Spectacular Now… So far I’ve reviewed The Maze Runner & The Hunger Games: Mockingjay – Part I & of course Odd Thomas. 🙂