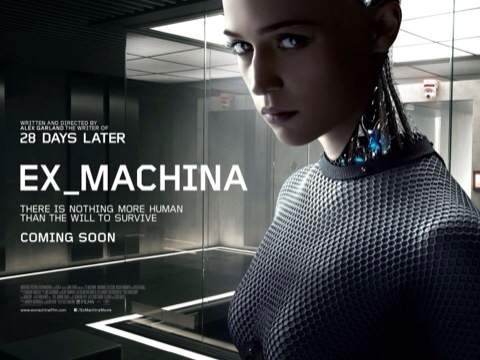 Plot Synopsis: (via IMDB)
A young programmer is selected to participate in a breakthrough experiment in artificial intelligence by evaluating the human qualities of a breathtaking female A.I.

Ex Machina was one of my most anticipated movies for this year. Sci-fi is my favorite genre and Ex Machina certainly didn’t disappoint in that department. It even makes up for the inferior Interstellar, which I found to be a pretty big disappointment. Ex Machina doesn’t really give us anything new as far as the exploration of artificial intelligence or “the singularity” but it’s a topic I’ve always found fascinating (such as in the obscure Electroma, which I reviewed HERE) and I think it does a decent job with a popular sci-fi concept.

First of all, I have to mention that it was good to be able to see Domhnall Gleeson & Oscar Isaac together in a movie before we see them again in Star Wars The Force Awakens & it’s probably helping Ex Machina to get more attention than it otherwise would, which I see as a good thing. This is Alex Garland’s first time directing after being a writer & I was excited to see how he’d do as I’ve really enjoyed his movies. He wrote The Beach novel, 28 Days Later & Sunshine plus the scripts for Never Let Me Go & Dredd. Okay, I’ve not seen Dredd but people really seem to like it so I’m eager to finally see that one now as well. Apparently, based on Ex Machina, there’s now talk of him directing Star Wars IX. I’m happy to see someone who seems very talented getting some recognition. 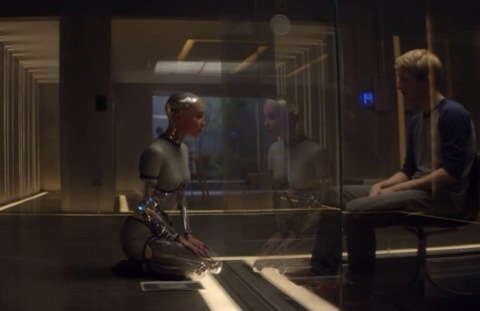 I thought Gleeson was very good in this and the right choice for his role. Isaac was good but it kind of felt like a role that could have been played by most anyone & I thought he paled in comparison to Gleeson & Alicia Vikander. Vikander as the female A.I. was probably the best thing about Ex Machina but may not get as much attention as the male leads, which would be a shame. She is, of course, lovely & her sad brown eyes alone displayed so much emotion (or DID they?). Yeah, she’s gorgeous… I hate her a little.

As I said above, the story itself doesn’t really do anything “new”. We’ve seen the dangers & morality issues associated with artificial intelligence explored in a wide variety of sci-fi movies such as Blade Runner, The Terminator, Westworld, etc. Oh, and of course D.A.R.Y.L. & Short Circuit… (had to get those in here!). I loved the look & feel of Ex Machina but can’t say the story is totally original. It doesn’t really delve as deep into the moral issues as I was hoping it would but it’s still far from “shallow”. I really liked that it didn’t feel the need to throw in a bunch of technobabble, however, which made it feel far less phoney than Interstellar as that tried too hard to impress. Garland tells this story in a pretty straightforward way & does leave you with something to think about once the film ends. It also looks quite beautiful (its style reminded me of Oblivion) and Alicia Vikander as A.I. Ava looked amazing. It wasn’t a case of style over substance, however – I just wish they’d had a little more to say about the moral issues involved in creating advanced artificial intelligence. I liked Ex Machina a lot & think it’s a worthy addition to the sci-fi genre. 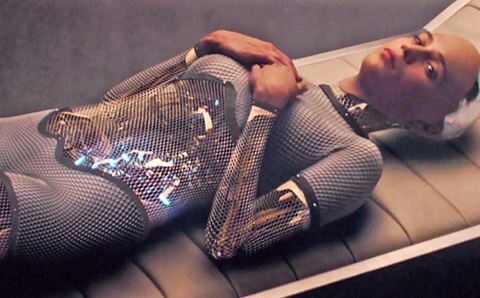