Ladies And Gentlemen, The Fabulous Stains (1982)

Plot Synopsis: (via IMDB)
The media and disaffected teens mistake the acerbic rants of an obnoxious teenage punk rocker as a rallying cry for the women of America, launching her and her talentless group to national stardom.

I mentioned this movie in my review for Miracle Mile because, like Miracle Mile, this is a movie from my beloved Eighties that I had somehow never even heard of! I love discovering movies such as these as I’ll always be especially fond of movies from this era. So, like I warned in my Miracle Mile review, I’m going to be positive about this movie but it is NOT one that most people who are reading this would like as much as I did.

Ladies And Gentlemen, The Fabulous Stains stars a very young Diane Lane…. as a PUNK! I wish I had seen this as a teen because I’d have loved it and I’d have wanted to be just like Diane Lane’s character (I’d still like that but I’m pretty old so I think my “sexy punk rocker girl” days may be behind me). She starts off looking like a normal, pretty girl-next-door but then reveals this look while on tour with her “band” for the first time: 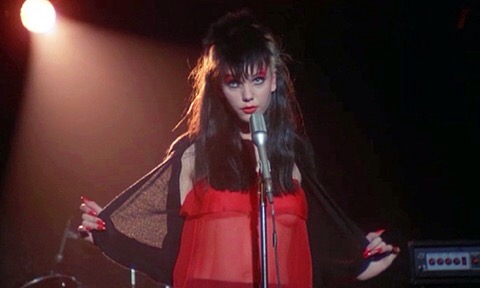 How awesome is that look?! Although I’d be far too self-conscious to wear the see-through red top… But I love the hair & the red eye-makeup! It’s funny that her look didn’t inspire a bunch of copycats – I think that the movie was just too obscure. I’m not sure exactly why this movie didn’t make it big. Yes, it’s not the greatest movie out there & it’s very dated now but I’ve seen far worse movies from the Eighties. After watching this, I figured it was time for me to finally watch Lane in Streets Of Fire as I somehow missed out on that one. You know what? Even though that one is more well known and is from the same guy who made the excellent The Warriors, I’d have to say I definitely preferred Ladies And Gentlemen, The Fabulous Stains to Streets Of Fire (I’ll be posting a review of that one on Friday). This one feels more gritty and “real”. Part of that may be the fairly low budget look and part may be because this was made by someone known more in the music industry than the movie industry. 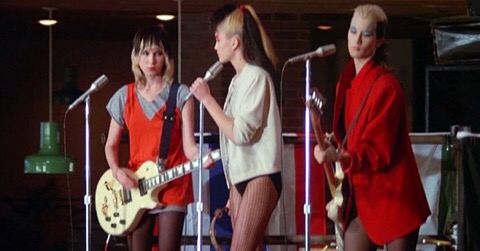 This was directed by Lou Adler, who only directed one other film (Up In Smoke) but did produce a few movies as well (such as The Rocky Horror Picture Show). He’s mainly known for being a record producer & manager and I think this film works well as a look into the music industry and how quickly musicians can rise to fame and then just as quickly come crashing back down thanks to a fickle audience. Lane’s character is an angry teenager who becomes a hero of sorts when being interviewed about her town for a local TV station. This leads to her “band” being signed up for a tour with two other bands (despite the fact that no one has heard them play) and it’s discovered during their first concert that they have no talent. But it doesn’t matter as Lane’s punk look & attitude propel them to stardom & she becomes a kind of symbol for feminism while telling everyone that she “never puts out”. Pretty soon every girl wants to be just like her: 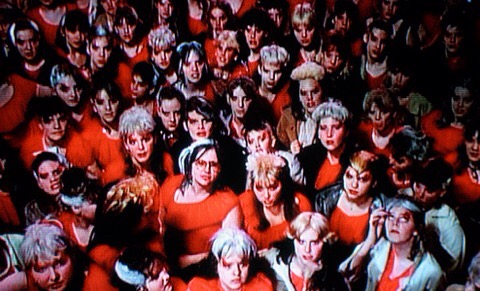 As always, I love seeing familiar faces when I watch films from the Eighties. Laura Dern plays one of the members of The Stains while an extremely young Ray Winstone plays the leader of the more talented punk band on tour with The Stains (The Looters). Elizabeth Daily has a small role as a maid (Dottie from Pee-wee’s Big Adventure – she has a bigger role with Lane in Streets Of Fire). I also loved the look of the aging metal band on the tour, Metal Corpses, who are well past their prime but don’t want to retire.

Unlike in Streets Of Fire (it’s hard to not compare them since I just watched them both), Lane’s character has some depth here and we see that she’s just a young girl who has been left with no parents after her mother’s death & she’s angry at the world. It’s strange how some movies don’t make it big – I thought this was pretty good and, although it of course looks dated, I think the subject matter works just as well now. The issues raised still seem just as relevant (maybe even more so as “fame” is now more shallow and full of no-talent assholes than ever). I liked it and I’d watch it again. In fact, I don’t like that this isn’t available on DVD here as it won’t stay on Netflix forever – it’s one I’d like to keep.

49 thoughts on “Ladies And Gentlemen, The Fabulous Stains (1982) Review”