Based on Escape from Alcatraz by J. Campbell Bruce

Plot Synopsis: (via Wikipedia)
Escape from Alcatraz is a 1979 American prison film based on true events. It dramatizes possibly the only successful escape attempt from the maximum security prison on Alcatraz Island.

This movie is great! I remember scrolling through Netflix a few months ago & being so sick of the absolute shit I’d watched recently and really wanting to see a proper,  good movie so I decided to give Escape From Alcatraz a go. I’m happy to say that I wasn’t at all disappointed! I actually don’t know why it isn’t a little more highly regarded – I think its IMDB rating is a little low at 7.6 as I actually enjoyed it quite a bit more than several of the “classics” that are in the IMDB Top 250. I think Escape From Alcatraz actually deserves a place in the Top 250 more than a lot of the films that are in it (especially the current films that end up there just because users rate modern movies far too highly).

If you haven’t seen this but you like either The Shawshank Redemption or The Great Escape, I can pretty much guarantee that you’d enjoy this one as well. It’s actually funny just how similar this is to Shawshank! There’s quite a similar set of quirky & likeable characters (even though they’re criminals) and an evil warden (Patrick McGoohan). Alcatraz even has its own Shawshank Brooks in the form of a painter & lover of chrysanthemums named Doc (Roberts Blossom). They’re so similar that I just looked up Stephen King’s novella on Wikipedia to see if he was inspired by the true story & this movie. Turns out that his story is heavily based on the 1872 short story God Sees the Truth, But Waits by Leo Tolstoy. What? Huh – I never knew that! You learn something new every day. 🙂

While watching this, I couldn’t help but wonder about the true story and how accurately it’s portrayed in the movie. From the little bit of investigation that I did, it seems pretty accurate from what I can tell (with the usual small changes to make for a better movie). Maybe I should read the J. Campbell Bruce novel someday – it really is a fascinating story. It’s funny how in this (and Shawshank), the criminals are the “heroes” while the prison employees are the bad guys. As this story is based on real people, however, I was worried after it finished that I was cheering the escape of hardened criminals. Looking them up, it appears that they were there mainly just for robberies. Not that I condone robbery! I’m just glad they weren’t murderers or rapists. Eastwood’s character (Sam Morris) was sent to the maximum security island as he had escaped from other prisons and, like the real life Morris, had a very high IQ. It was quite an elaborate two-year long escape plan – You have to give these guys credit for their determination. Well, Andy Dufresne spent far longer on his plan. 😉 (Sorry, sorry… I just can’t help the Shawshank comparisons!). 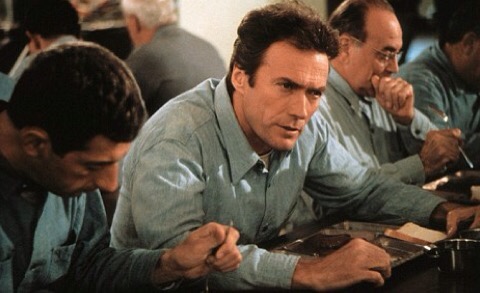 Besides Clint Eastwood, we have a lot of other very recognizable faces in this movie. The painter & flower-lover that I mentioned, Doc, is played by Roberts Blossom (the nice “scary” old man in Home Alone!). Another really great character who is based on one of those involved in the plan but whose character was changed slightly from the real-life man is played by Larry Hankin (grumpy neighbor Mr. Heckles in Friends!). The warden is played by Patrick McGoohan (Scanners!) and another great inmate who helps out, English, is played by Paul Benjamin (Across 110th Street! Never seen it!). The actors playing the bank-robbing brothers from the real story are played by Fred Ward (Tremors!) and Jack Thibeau (I didn’t know him but he was in Lethal Weapon as was Danny Glover, whose very small film debut was in Alcatraz). As for Clint Eastwood, I have to honestly say that I think this is now my personal favorite of his movies that I’ve seen so far.

Based on the fascinating true story of what is probably the most famous prison break, Escape From Alcatraz was likely to be a highly entertaining film. And it certainly was! The story seems pretty unaltered as far as the main characters & the actual prison break go. As for the lesser characters, I don’t know if people like Doc were real but I’m not too bothered if things like that were added as these little things help to make this such an enjoyable film. Were the real-life criminals such likeable “heroes”? Unlikely. But movies often elaborate in this way. All in all, this is a great film and those who are interested in the real story can further explore its accuracies if they wish (and I just might someday). I call that a successful movie when it makes you want to learn more about the real story. And, as brilliant as this movie is, it’s only my second favorite “Escape” movie that I’ve watched for the first time this year! (I’d have to put Escape From New York above this one – what a good year I’ve had for Escape movies). 🙂 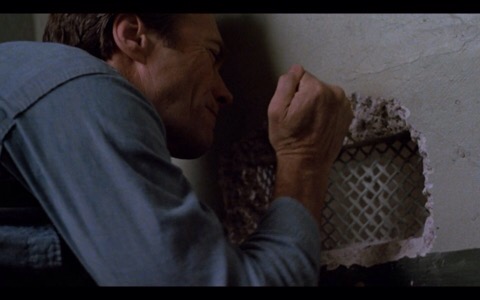