Plot Synopsis: (via IMDB)
The foot soldiers of the early feminist movement, women who were forced underground to pursue a dangerous game of cat and mouse with an increasingly brutal State.

I went to a movie with the hubby the other day and I really needed to go to one since I hadn’t been to one in months and I was having major withdrawal. There weren’t a lot to choose from (I’m not really a Bond fan and The Peanuts Movie doesn’t come out in the UK until the end of December. Grr!! I’m not happy about that!). Anyway, I fully admit that I don’t often feel like watching a “heavy” film but Suffragette was the only thing showing at a time that worked out for us.

Well, I’m glad I saw it because I thought it was really good. I’m quite sure it will end up in my Top Ten Movies Of 2015 when I make the final list. I’ve seen some “meh” reviews of it on the blogs here but I didn’t feel that way about it at all.

I’ll also admit this right now: I’ve never had much of an interest in “history”. I can understand why some people do but it was always one of my least favorite subjects in school and you’re unlikely to find me ever watching the History Channel. The past is the past – I’m more interested in the present and the future. So I of course knew of the Suffragettes although I didn’t know a lot of specifics. I definitely have even more of an appreciation for what these women did after seeing this movie, though, which to me should be the point of movies about important historical events.

I’m aware that Carey Mulligan’s character and story are fictional & I think that may be part of the reason why this movie isn’t being praised quite as much as historical dramas which are based on completely true stories. I have no issues with some fictional characters, though, as long as the story is told well. Mulligan’s character is an amalgamation of the many nameless women who, at great personal cost, fought for something they believed in.

Would I have been a Suffragette? Would I have dared to speak up at a time when a woman questioning things as simple as why she wasn’t allowed to vote yet was expected to follow the law or why she got less pay than a man doing the exact same job could lead to a beating by police, time in prison, torture if she chose to go on a hunger strike, and the possibility that employers, friends & loved ones (both male & female) would turn their backs on her just for questioning these very basic rights that we take for granted nowadays? No – I wouldn’t have been a Suffragette. I’m the type who doesn’t even speak up for herself now in 2015 so I have a tremendous amount of respect for these women who did so at at time when it was downright dangerous to ask for equality. These are the women who young girls should be looking up to (I discussed the basics of this movie with my own daughter after watching it). It breaks my heart that more girls know the names of each useless Kardashi-thingy than a name like Emmeline Pankhurst.

I’m not going to act like I knew much, though, as I already said that I never had much of an interest in history. So while I knew about Pankhurst, I’ll admit that I knew nothing about the other real-life female character in this movie (Emily Wilding Davison). Hubby had a good giggle when he leaned over & said “you’re the only person in this cinema who doesn’t know what’s about to happen, aren’t you?” when her big moment came. Yep! What can I say? I got a typical 80’s American history education. 😉

So as a movie-blogger and not a history-blogger, I have to say that I thought the actresses in Suffragette were all fantastic. Streep plays Pankhurst but it’s an even smaller role than I was expecting (I think she had no more than ten minutes of screen time). She was, of course, her usual Streep-y self. She’s always great & I also love her in real life. She’s feisty! She’s always speaking out about her beliefs so it’s no surprise that she would play someone like Pankhurst. The same goes for Helena Bonham Carter, who plays the exact sort of character you’d expect in Suffragette. I’ve never considered myself a fan of hers but the truth is that she’s an excellent actress and another one that I have respect for in real life (she’s a feisty one too – I probably like strong, feisty women because I’m such a pushover myself).

Finally, the characters played by both Anne-Marie Duff & Carey Mulligan were based on the many working class Suffragettes who found it very hard to fight for a cause while also trying just to survive & make a living for their families. Both actresses were fantastic and I was happy to see Mulligan in a great role again. I was such a big fan of hers after that Doctor Who episode Blink but then she seemed to play the same characters over & over (her excruciatingly dull Daisy in The Great Gatsby drove me nuts, but that may be more the fault of how that character was written).

I suppose I especially liked Mulligan in this as I could relate to her character, who kind of inadvertently gets involved in a cause she’s not sure she wants to be a part of due to the ramifications and the fact that she has a son she loves & has to take care of. We know about the more public figures such as Pankhurst but it’s hard to imagine the sacrifices these working class women made, especially when even a peaceful protest could land them in jail for days, hurting the family who depended on their meager wages. Mulligan may be one of the fictional characters but she felt the most “real” to me. Bravery isn’t always bold & brash – as much as I’d love to be an educated & ass-kicking character like Bonham Carter’s, there are more women in this world who are like Mulligan’s character & I’d be happy to see her understated performance get an Oscar nomination.

I did do a tiny bit of reading about the real women after watching Suffragette (this is a really good article about some of the real women who inspired the characters in the movie: Biography.com).

My favorite story is that Helena Bonham Carter’s character is a combination of a husband & wife team who fought for women to get the vote (Barbara Ayrton Gould and her husband Gerald) and a woman who knew martial arts & taught the Suffragettes jiu-jitsu to defend themselves and to protect the leaders of the movement (which became known as “suffrajitsu” according to the above article. I love that!). This woman was named Edith Garrud and Bonham Carter was inspired by her & had her character named Edith in her honor. I want to learn suffrajitsu! That’s awesome. 🙂 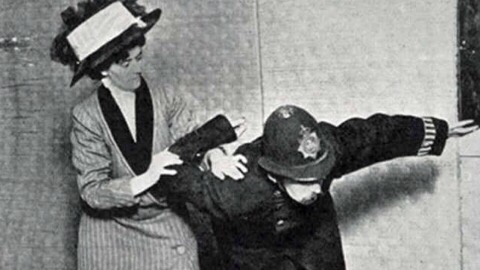 Have a look at the above article if, like me, you’re not much of a history buff. I know I really should do more reading about the real-life Suffrage movement as I do find women’s rights throughout history to be quite fascinating (mainly due to the fact that I find it just plain confusing why all human beings, to this day, still aren’t all treated equally). The film ends with statistics showing the years in which women earned the right to vote in various countries and it’s shocking just how recent a lot of those dates were (never mind the places where they still aren’t allowed to vote even now). As far as this movie goes, I think it does its job in bringing attention to a still important topic as, to me, Suffragette is just as much about everyone’s basic human rights as it is about women being able to vote. I know not everyone loved it but this movie gets my vote. 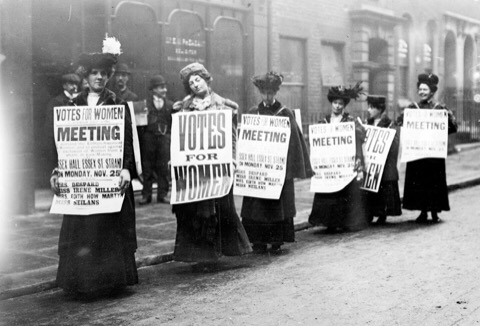