Based on Steve Jobs by Walter Isaacson

Plot Synopsis: (via IMDB)
Steve Jobs takes us behind the scenes of the digital revolution, to paint a portrait of the man at its epicenter. The story unfolds backstage at three iconic product launches, ending in 1998 with the unveiling of the iMac.

My husband dragged me to this movie. Are any fun movies going to come out at any point? I hate this time of year! They always drag out all the “worthy” films at this sort of time. I need braindead veg-out movies for the crazy holiday season. Like… Road House! I wrapped some presents last night while watching Road House for the first time. Holy shit that movie is f*%king hilarious. Why did no one tell me how awesomely bad that movie was?! I think it may be my new yearly Christmas-present-wrapping movie. Anyway, Steve Jobs was better than I was expecting for a “biography” film about an unlikeable guy & technology gobbledygook.

This movie was a hard one to get into at first but, by the end, I really liked how they chose the run-up to three big product launches to tell his story. To my satisfaction, any gobbledygook technology talk was kept to a very bare minimum. The movie really doesn’t show you anything of the beginnings of his career, though (or the final years & his biggest products).

If you want a very detailed & in-depth look at the career of Steve Jobs, I wouldn’t say that this movie is the place to start as it only highlights part of his career. I have no problem with this, though – you can read books about all that. This movie focuses much more on his personal life and his behavior toward work colleagues and, especially, his relationship with his daughter. I find this sort of thing much more interesting and was happy that the movie chose this direction and that it had some great performances from everyone involved. 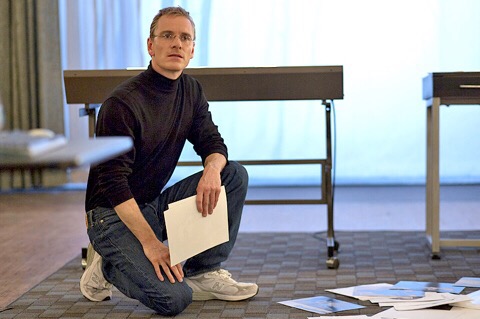 I’ll state the obvious & say that Michael Fassbender looks nothing whatsoever like Steve Jobs. Not that I’m going to complain about getting to look at hottie Fassbender but it was a little distracting & I can’t say that I at all felt like I was watching “Steve Jobs” up on that screen. Maybe it didn’t help that I knew nothing whatsoever about Steve Jobs (and still don’t, I suppose – but I can say that this movie definitely doesn’t try to make you like him). Fassbender did a very good job as always, though – I guess it’s not his fault that he’s just too hot.

The true highlights of this film were Kate Winslet and, surprisingly, Seth Rogen. Oh yeah – and Jeff Daniels was very good too! Nice seeing him again as I can’t think of the last thing I saw him in. Speed?? Which makes me think of Keanu Reeves. Which makes me think of Patrick Swayze in Point Break. Which makes me think of Road House again. Seriously – if any of you haven’t seen Road House, you NEED to. Sam Elliott is such a stud. Anyway, Winslet, Rogen & Daniels are all truly fantastic in Steve Jobs so I certainly can’t fault any of the performances. There’s some damn fine acting in this. Unlike in Road House…. Good lord!

Steve Jobs is a very good film but it’s not for everyone. It’s one you should watch if you are a fan of any of the actors as they’re all at the top of their game here. Just be aware that it focuses only on the relationships that Jobs had with the most key people in his life and that you see only a pretty small portion of his years on this Earth.

The direction that the film chose, to have everything revolve around three product launches, may not work for everyone but I thought it was a simple yet very effective way of telling his story. His life DID revolve around his work (so far as I can tell from what very little I know of him) so I think it was a very fitting way to tell his story. The people in his life had to fit around his primary focus, which was his career and his products. I should also point out that this movie very much felt like a play, which some will love & some will hate. I have to say that I liked this film more than Sorkin’s The Social Network and it’s the best thing Danny Boyle has done in a while.

Steve Jobs admittedly deserves a slightly higher rating than I’m giving it but I have to admit that, while it’s good, it’s very unlikely that I’d ever watch it again. Unlike Road House! That’s a multiple-watcher!

Review written on my iPhone 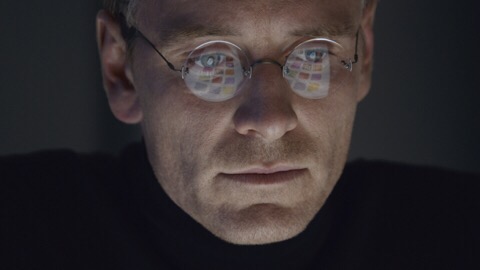