Plot Synopsis: (via IMDB)
Two seemingly unconnected souls from different corners of the United States make a telepathic bond that allows them to see, hear and feel the other’s experiences, creating a bond that apparently can’t be broken.

How did this movie so completely pass me by? It’s fantastic. I’m usually pretty informed about this sort of thing but I don’t think I’ve even seen this one mentioned by any fellow bloggers. I added it to my Netflix list ages ago after reading what it was about & thinking “that sounds sort of interesting – I’ll watch that by myself one night if it’s one of those very rare occasions where I’m in the mood for some girly chick flick“. But it’s not just another girly chick flick… It’s GOOD. And, I never thought I’d say this but I think I have my new Say Anything. I think I have my new Lloyd Dobler! Here he is – the perfect boyfriend: 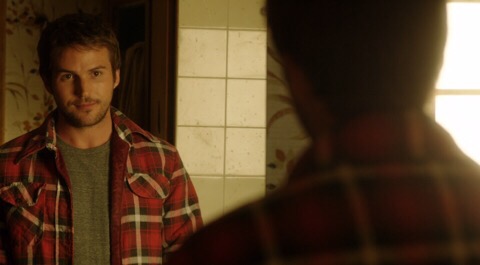 He’s so boy-next-door cute and so sweet in this movie. Yeah, I’m old now but I can still have a crush on a movie character! Anyway, I’m not one of those girls who’s a big fan of romantic movies. Most of them make me want to puke because the characters are so unbelievable & usually so goddamn attractive that they don’t seem real & I can’t relate to them in any way or buy into their love story. Not that Zoe Kazan & Michael Stahl-David are exactly unattractive but they felt like real people and I loved their unconventional romance.

So, like the synopsis says, these two have a telepathic connection that they feel at various points throughout their lives but which fully comes into effect one day when they’re adults. It allows them to see through each other’s eyes and to talk to each other whenever they want. I really loved the concept – it’s very simple yet works perfectly in this film (probably, again, mainly due to the characters being so fully believable and the film being well written).

Yes, this was written by Joss Whedon & I didn’t know that until I started watching it. I’m sure that has probably piqued the interest of those reading this who are fans of things like Buffy (I never watched that – I was too old for it) or Firefly (great show) or even The Cabin In The Woods. I’d say that this movie has the same sort of overall feel as all of those but is a little more grown-up (I’m not sure of the characters’ ages but I’m guessing around 30).

I liked that they didn’t spend ages explaining the “telepathic” thing. There was no need to. These are just two people with a great connection having chats & sharing their lives with each other the same way any good friends would in normal circumstances. I’m a big fan of good dialogue & characters that don’t feel fake or forced and I instantly bought into the way these two talked to each other as though they were just having a normal long distance chat on the phone with a good friend. It’s like any long distance romance movie, I suppose, but with a more unique twist and with characters I actually believed & cared about.

I’ll wrap this up before I ramble on and just keep saying the same things over & over. What can I say? I loved this film. It’s rare that a romance works for me but, as with Say Anything as well, I guess that’s the difference a good writer and strong characters makes (and it certainly didn’t escape my notice that this movie shares its name with the Peter Gabriel song made so famous by my beloved Lloyd Dobler & his boom box).

I won’t pretend there aren’t cliché moments (he’s a poor ex-con living in a trailer in sunny New Mexico, she’s a well-to-do doctor’s wife living in snowy New Hampshire) but it doesn’t matter when the movie is actually good. And the contrast between their two worlds was quite beautiful – there are so many lovely shots of New Mexico that I want to move there right now. Into a trailer with Michael Stahl-David’s character! But, seriously – don’t write this one off just because it’s a romance. I almost did and I’d have missed out on a new favorite if I had.