I figured it was time to catch up on reviewing the movies I’ve watched by doing another quickie review trio. All three of these films were quite good (although one of them was a little on the boring side…). Let’s discuss! 🙂

Plot Synopsis: (via IMDB)
Three teenage friends, in the ultimate act of independence, decide to spend their summer building a house in the woods and living off the land.

I kept seeing movie bloggers on here compare The Kings Of Summer to Stand By Me and, since Stand By Me is one of the best movies EVER, I knew I had to watch it. Well, it’s certainly no Stand By Me (but what is??). However, it’s still a good modern day coming-of-age film and I can see some current young teenagers connecting to this one in the same way I connected to Stand By Me.

I have to say this was off to an excellent start when the the first song in the film was Thin Lizzy’s Cowboy Song. Yes! It was the perfect fit & had me all excited to keep watching this. But then I remembered that the film wasn’t set in the Seventies even though they were using an old song. Damn! You know what? I think this film would’ve been awesome if it had been set in 1976 or so. But maybe part of the point is that these boys choose to “live in the wild” and away from today’s modern conveniences, giving the film a somewhat timeless feel that’s pretty cool.

What I didn’t expect was the amount of humor in this as I thought it was going to be more of a coming-of-age drama. I found it kind of jarring at first but got used to it and, by the end, I enjoyed the humor. The humor is of the “Nick Offerman, Megan Mullally, etc” variety. They’re a part of that group of people who mean absolutely nothing to me as I don’t watch whatever American TV show(s) they’re all in together and I think that movies that rely on these types of actors don’t always translate so well overseas. I found the film fairly funny overall but preferred when the boys were on their own & away from their crazy American TV parents. In fact, I could understand why they wanted to get the hell away from their annoying parents & go live in the woods. I did really like the token “crazy friend” who says & does some pretty bizarre things – he probably made me chuckle the most (in my head – I’m not a laugh-out-loud person):

I enjoyed this movie but was slightly disappointed that it wasn’t just a little more serious or heartfelt. It reminded me of Mud, which was another recent coming-of-age film with “boys in the wild”. I’d have to say that I actually enjoyed The Kings Of Summer more and would be more likely to watch it again but that Mud is the superior film with better performances.

The Kings Of Summer is at its best when the boys are on their own building their house in the woods as these parts of the film feel timeless in a way that will still make it relevant years from now. The film is unfortunately let down somewhat by quirky adult characters whose humor won’t work for everyone, although I personally didn’t mind it. I sound disappointed but the comparisons to Stand By Me didn’t help, I suppose. The Kings Of Summer is a very enjoyable film and is definitely worth a watch if you like coming-of-age stories as much as I do. Just don’t expect anything too deep – it’s mostly just light-hearted fun.

Plot Synopsis: (via IMDB)
The tale of an outlaw who escapes from prison and sets out across the Texas hills to reunite with his wife and the daughter he has never met.

Ain’t Them Bodies Saints is the one that’s “a little on the boring side” of these three movies. I don’t have a lot to say about it so I’m going to attempt to not ramble on & to write only two paragraphs (not counting this one!). I watched this for two reasons: I liked the odd title and I have a bit of a girl crush on Rooney Mara.

As for the title, I found this in IMDB trivia: “The title is director David Lowery’s “mondegreen” – a mishearing of a song lyric – and has no actual meaning”. Interesting! But a little disappointing as I was hoping the title was meaningful in some way. As for Mara, she’s her usual type of character in this: A tiny, quiet waif with beautiful eyes and zero personality. I don’t mean that in a bitchy way – I haven’t seen some of her biggest roles yet but she’s always this exact same sort of character in what I have seen. I’d like to see her play something very different but, for this film, she was perfect for the role as the “Bonnie” type character in a very laidback & extremely slooooooooow version of the typical outlaw couple story made famous by the brilliant Bonnie And Clyde film.

This movie is worth a look if you like outlaw couple stories, a very slow pace, and some lovely cinematography that clearly takes its inspiration from Terrence Malick’s films. Actually, I suppose this movie is much more similar to Badlands than to Bonnie And Clyde. It’s hard to know whether or not to recommend it as I think you’ll either love it or be bored out of your mind. I’d say that you should make sure to watch the classics Bonnie And Clyde and Badlands first but then you’d find that this one most definitely pales in comparison. It’s a very pretty movie with shallow characters and not a lot of story but I think some film lovers have bought into its look and style. I did appreciate Ain’t Them Bodies Saints as I sometimes go for style over substance but I feel like this same sort of film has been done much better by other filmmakers in the past. Based on this movie, I’ll be interested in seeing what the director (David Lowery) does with the Pete’s Dragon remake as I adored that movie as a kid but, as much as I hate remakes, it’s one that I’ll admit could do with being updated as it’s badly dated now. 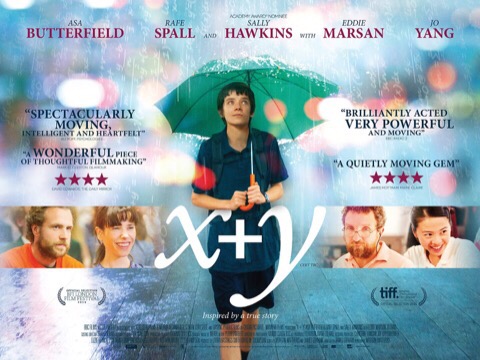 Plot Synopsis: (via IMDB)
A socially awkward teenage math prodigy finds new confidence and new friendships when he lands a spot on the British squad at the International Mathematics Olympiad.

Although The Kings Of Summer was my favorite of these three movies, I’d have to say that this was actually the best film of the three. By the way, this is called A Brilliant Young Mind in America. X+Y was inspired by a documentary the director (Morgan Matthews) did called Beautiful Young Minds, which was about the British team in the 2006 International Mathematical Olympiad and how many of these young mathematics geniuses have some form of autism as does Asa Butterfield’s character in X+Y.

I don’t know how to say this without sounding rude but this movie is SO very British. Well, I have to admit that the British do the “life is hard & everyone is damaged in some way” movies best. At least it’s honest & much more realistic than Hollywood movies filled with the beautiful & the perfect but I’ve always turned to movies more for escapism from the realities of life & have to be in the mood for a drama before I watch one. Don’t get me wrong, though – I far prefer a movie like this, which is filled with rich characters & good performances, to some of the shallow crap that Hollywood churns out. 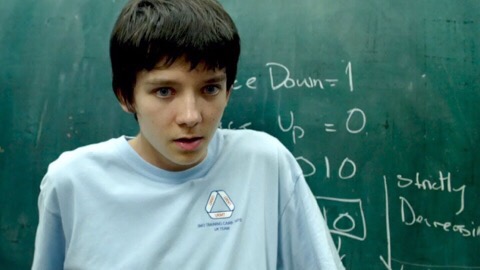 The quirky British comic relief in this film is provided by Rafe Spall’s character and I liked him a lot. He deals with his own serious issue through humor and his relationship with Butterfield’s character & Butterfield’s mother (Sally Hawkins) work really well in the film. I also really enjoyed the scenes showing the British team in China. Most of all, though, the story is about an autistic boy and the difficulties faced by those who love him (specifically, his mother in this movie – the mother/son relationship is the key to this film).

X+Y is a tad too formulaic & clichéd at times but, ultimately, that doesn’t usually bother me too much as long as a movie is done well and has characters that I care about (I felt the same way about a great little obscure romance recently called In Your Eyes). This movie admittedly deserves a slightly higher rating than I’m giving it as movies with a little too much tragedy & drama aren’t really my thing but don’t be discouraged by my slight negativity if you think you’d like this. X+Y is a good film.

**You know I need to end this with Thin Lizzy’s Cowboy Song, as heard in The Kings Of Summer… 🙂

31 thoughts on “The Kings Of Summer, Ain’t Them Bodies Saints & X+Y Movie Reviews”