I did a long post at the end of the year with mini-reviews of everything I’d read in 2015 (you can see that post HERE). I posted it New Year’s Day so it got very little action as I suppose everyone was hungover. 😉 I plan to re-post a few of those mini-reviews of my favorites from that list. I’ll post the original but will add a little more as some were only a few sentences.

In the case of Tank Girl, I’ve since seen the movie. Um. Urgh…. The film is, shall we say, not as good as the book?!? (Unlike Tank Girl, I’m being really f*%king polite by saying that). But I’ll be posting a review of the movie tomorrow – for now let’s talk about the Tank Girl graphic novel. 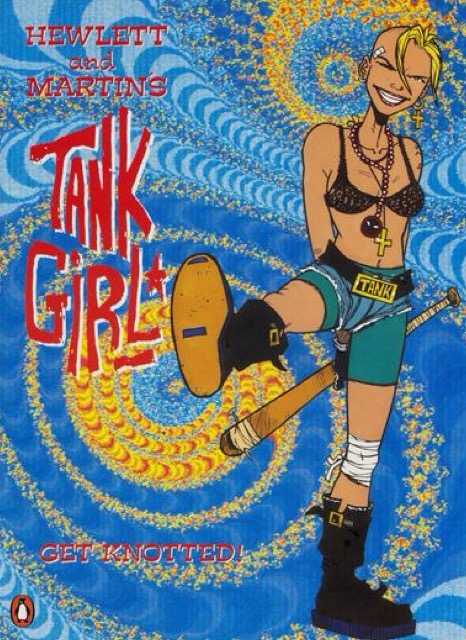 What It’s About: (via Wikipedia)
The eponymous character Tank Girl (Rebecca Buck) drives a tank, which is also her home. She undertakes a series of missions for a nebulous organization before making a serious mistake and being declared an outlaw for her sexual inclinations and her substance abuse. The comic centres on her misadventures with her boyfriend, Booga, a mutant kangaroo.

This is the second (of two!) graphic novels that I’ve read (the other being Watchmen). Wait – is this a graphic novel? It’s more of a collection of several comics… I think?? Is there a difference?

This sort of thing is something I have NO knowledge in but I have to say that I did enjoy Tank Girl. She’s a cool character and I really appreciated the (inappropriate) humor (it took me a while to read it all as I had to keep putting it away someplace where my young daughter wouldn’t grab it). I mean, Tank Girl has sex with a kangaroo. Whaaaat? It’s pretty damn bizarre but it’s fun and I was entertained.

What I didn’t talk about in my mini-review was why I decided to read Tank Girl. My hubby bought it years ago and it had always been sitting in our bookcase (with that exact blue cover up there) but it wasn’t until last year when I’d run out of things to read that I decided to ask him about it as I did like the look of that image on the cover.

To be honest, although I hadn’t seen the movie, it looked really bad & was trashed by critics so I never gave the comic much thought. Well, hubby was all “you know why you’re drawn to that cover? Because its co-creator (Jamie Hewlett) also created Gorillaz with Damon Albarn”. That convinced me to finally check it out as I LOVE the band Gorillaz! I’ve always thought their virtual cartoon band was a brilliant idea (helped by the fact that the music was equally as cool as the band members Hewlett designed) and I’ve never understood why they weren’t absolutely huge in every country. Here they are:

Anyway, as for Tank Girl, I loved its “attitude” and the fact that the title character does NOT give a fuck. She’s violent, irresponsible, alcoholic, surprisingly dumb, and her boyfriend is a kangaroo yet you can’t help but like her. The “storylines” are all over the place (kind of like the inside of the character’s mind, I suppose) but I didn’t care as it was, overall, a funny & enjoyable read. I don’t exactly know if I can recommend it, though, as it’s not for everyone. It would really need to be your type of thing if you’re going to check it out but I’m glad that I finally did.