Plot Synopsis: (via Wikipedia)
The film stars William Holden as Joe Gillis, an unsuccessful screenwriter, and Gloria Swanson as Norma Desmond, a faded silent movie star who draws him into her fantasy world where she dreams of making a triumphant return to the screen.

At least I watched this Top 250 movie slightly more recently than the last one I reviewed (Warrior). I watched this on the 7th of November, 2015. I’m catching up! Unlike Warrior, this is an all-time classic that deserves its place in the IMDB Top 250. Although it’s not very “me” or one I’ll ever consider a favorite at this point, it’s easy to see why it’s so appreciated by true film lovers given its themes and its exploration of the movie industry & stardom. Plus the story of a faded starlet, a woman who has aged, is sadly still just as relevant of an issue nowadays. But things are improving somewhat, I think. We’ll get there one of these days, ladies! Let’s do this! Equal rights!! Do I sound like Patricia Arquette? I hope so! She’s great. 🙂

First of all… Wow – I had no idea how much American Beauty owes to this film. Damn – American Beauty has just gone down slightly in my estimation. But Kevin Spacey is still great! I’m sure he’s a William Holden fan.

I really need to watch more older films like this one. I’m not sure why I find that so difficult – I started this project as a way to “force” myself to watch the old classics I’ve never seen. Therefore, the names in this don’t have as much meaning to me as they should. Look at this impressive list from Wikipedia:

I should know more of those people but I only instantly recognized a couple of names. William Holden was in plenty of films but I never really noticed him until I watched The Bridge On The River Kwai for this project (which I loved – it’s one of my favorite “new discoveries”). I really enjoyed his performance in this. 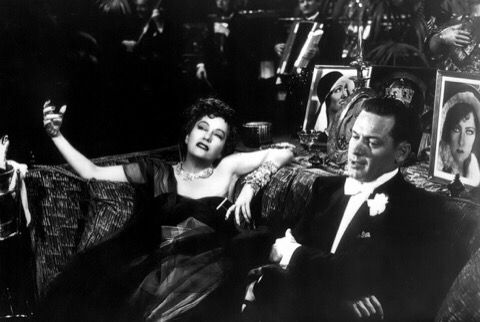 I knew that Gloria Swanson was a star long before this film, which is why she was chosen for this, but this is certainly the only thing I’ve seen her in. Wow – she really is fantastic! I’m shocked that she didn’t win an Oscar for this. She was of course nominated but I just assumed she’d won. She was robbed! 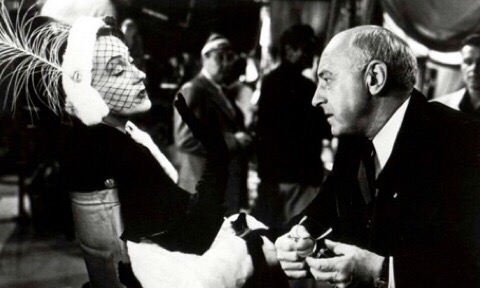 If you’d asked me to name Cecil B. DeMille’s work before I looked him up just now, I’d have only been able to say The Ten Commandments. I’ve never seen any of his films. I’m so ashamed! I’m a sorry excuse for a movie blogger. I know of his name just as much from the extremely well-known “All right, Mr. DeMille, I’m ready for my close-up” line in this (as do most people – it’s one of the all-time greatest movie quotes). And I love now knowing that the man playing Swanson’s butler in this movie used to direct her in real life. I didn’t know that either until I read this in IMDB trivia:

There are several references to Gloria Swanson’s actual career in the film. Norma’s butler, Max, who used to be one of her directors is played by Erich von Stroheim, who directed Swanson in the movie Queen Kelly, clips from which are used in the scene where Norma and Joe watch one of her old films. Norma goes to visit Cecile B DeMille, several of whose films she had starred in. Swanson had also starred in several DeMille films. 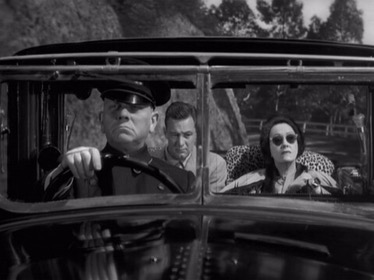 Sunset Boulevard is a true classic. It’s very “clever” & well-written, but I think that’s a given since it’s a Billy Wilder film. It’s very self-referential and the way it satirizes the movie industry was apparently quite controversial at the time and makes this movie seem very ahead of its time. So many films are similar to Sunset Boulevard nowadays – it reminded me of things like the Coen Brothers films in the way those are written & of course the whole of Robert Altman’s The Player. It clearly has had a huge impact on many filmmakers and I’m glad I finally watched it. I can now say that I’ve seen four Billy Wilder films (Sunset Blvd, The Apartment, Witness For The Prosecution & Double Indemnity – yay, me!). Although I’d have to say that I didn’t love this one in the same way that I did The Apartment, this one is probably the best “film“. Sunset Boulevard is a movie that every true film lover should watch at least once, especially for Swanson’s performance. It deserves a higher rating than I’m giving it. Hey, as I always say: I rate these movies based on my own personal enjoyment. I enjoyed The Apartment more but there’s no denying Sunset Boulevard’s brilliance. 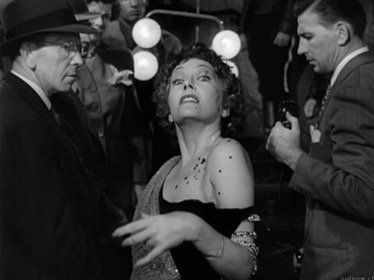 FYI – If anyone wants to do a guest Top 250 review, these are the films still available: