I should’ve posted this video the week I posted My Top Ten Jennifer Jason Leigh Movies. Then I thought “Well, I’ll wait until I finally see The Hateful Eight then I can update that Top Ten & post this video”. Okay, I’ve still not seen The Hateful Eight but I just really felt like finally posting this video. So many awesome things combined! Faith No More, Jennifer Jason Leigh, and Alfred Hitchcock! If only Totoro & David Bowie had somehow been in this video, too – then it would be the coolest thing EVER. 😉

I love Faith No More & always thought they were an underrated band at the time. Their songs still stick around on my iPod to this day whereas I’ve moved on from a lot of the other music I listened to in the late 80s/early 90s. I mean, who still has stuff like Candlebox on their iPod these days?! Ha – I seriously can’t now name one Candlebox song but I swear I have an entire Candlebox album knocking around somewhere in my house… 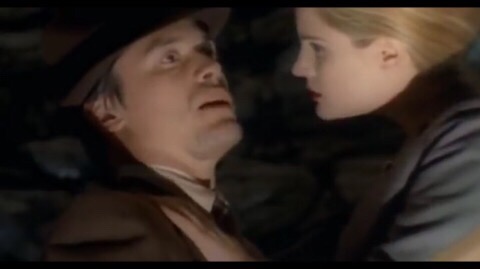 Last Cup Of Sorrow came along in 1997, much later than the album with their most well-known stuff (1989’s The Real Thing). I think everyone knows Epic but Midlife Crisis may be my favorite song.

Singer Mike Patton also had another band called Mr. Bungle. They made some pretty damn weird stuff. I liked the above album but can’t say I’ve heard it in years. I remember Squeeze Me Macaroni & I was kind of fond of the song Egg. My ex used to love both Faith No More & Mr. Bungle and was quite proud of the fact that he & his friend picked up some chicks once but managed to scare them off since he was playing Mr. Bungle. I can understand why but clearly I was weird enough to not be scared away. 😉 Patton also did the “creature vocals” for the movie I Am Legend since he can do such crazy shit with his voice. I love that bizarre fact.

Come to think of it, that ex had a collection of all of Faith No More’s videos. I should really buy that if it’s still available… It may be where I first saw this video – I don’t remember if it was a big enough hit to get much play on MTV? That’s a shame – I can’t think of any other Hitchcock-inspired music videos! A video like this would never get made now. I really miss the creativity there used to be in music. Where has that gone?!

Okay – I just had to Google Candlebox to see if I remembered any of their songs. I think I vaguely remember Left Behind!