George R.R. Martin interviewed Stephen King at an event last Thursday night?! Wow! How did I miss the news of these two legends being in the same room together? And I love Martin’s question to King: “How the f*%k do you write so fast?” HA! You can read more about this event & some of their conversation here: thisisinsider.com. Wish I’d been there!

FYI – I’m aware that last night was the penultimate episode of Game Of Thrones, meaning someone big most likely died a horrible death. I’m in the UK and didn’t feel like staying up until 3am to watch it so SHUT YOUR YAP until I’ve watched it tonight!!! 😉

Any regulars here probably know by now that I’m a HUGE fan of Stephen King but, as for Martin’s books, I shamefully have yet to read them even though I got A Game Of Thrones for Christmas 2014. I know, I know… Hey, he’s apparently such a slow writer that I should easily catch up before he finishes the next book, right?? At least I’ve finally read ONE of his books (Tuf Voyaging – I loved it! Review HERE). 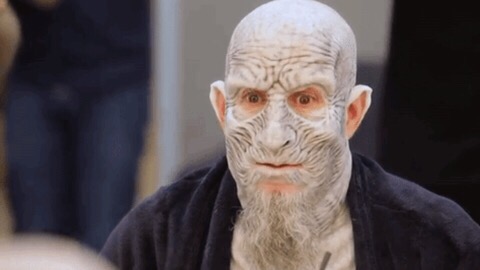 And to keep with a Game Of Thrones theme for this post, I thought I’d share a link where you can watch Scott Ian of Anthrax get a White Walker makeover. Scott Ian of Anthrax!!!! Don’t you dare say “Who?” my young bloggers – Scott Ian rules. I was such a huge Anthrax fan in my teen years and I absolutely loved that they so often included pop culture references in their songs (such as Judge Dredd, Blue Velvet, and my beloved Stephen King’s books). Geeky metalheads! Is there anything cooler?

Anyway – it’s a great video to check out whether you’re a Scott Ian fan or just a Game Of Thrones fan. Ian has a video series called Bloodworks where he goes behind the scenes to talk to make-up and effects artists & he talks to Barrie Gower, prosthetic makeup designer for Game Of Thrones, for this episode. Check out the article & video here: io9.