I originally posted this review for the Recommended By Blogathon over at Head In A Vice. Hopefully Tyson doesn’t mind me re-posting it in full now as it’s the perfect fit for the Creepy Dolls Week I’m doing here. 🙂

Plot Synopsis: (via IMDB)
A group of people stop by a mansion during a storm and discover two magical toy makers, and their haunted collection of dolls. 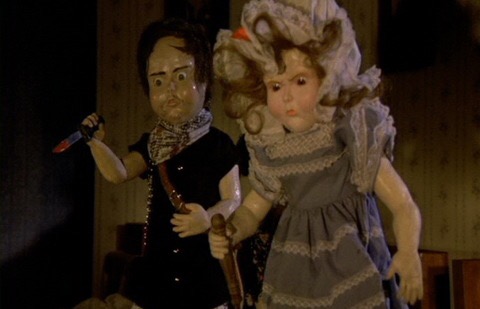 Why I Chose This For The Recommended By Blogathon:

Dolls was reviewed HERE by Laura over at FILMNERDBLOG & I thought it sounded hilariously bad but fun. Laura reviews a wide variety of films but seems to especially have a love/hate relationship with cheesy horror movies. I started following her when I saw she was reviewing things like Basket Case. 🙂

I thought it was time I return the favor as Laura has watched a couple of movies based on my reviews (From Beyond, which is from the same director as Dolls, and the awesome Hardware). I think she regretted both, especially From Beyond. Lol! I mean, check this From Beyond shit out – what a trooper she is:

My Opinion On Dolls:

I don’t think I liked this QUITE as much as Laura did but I did have a lot of fun with it. It’s pure 80’s cheese with dodgy acting & fake-looking gore so it’s totally my type of thing (I can’t watch modern horror – too gross!). And the DOLLS… Man I hate dolls – I can’t think of anything much creepier than going into some strange old mansion in the middle of nowhere & finding it’s filled with THESE: 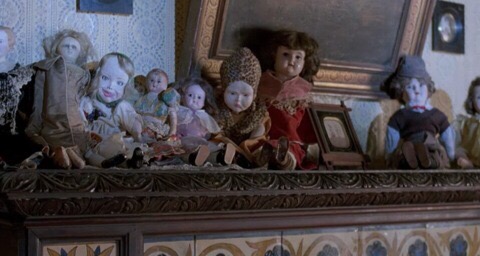 The characters in Dolls are exactly what you’d expect from a horror movie like this (and I mean that in a good way). The main character is the young girl and she’s cute & sweet and you want everything to turn out okay for her as she’s stranded in this mansion with her father & step-mother who are both complete assholes. I really thought the step-mother was a man until I looked her up at IMDB. Turns out she was also in From Beyond! Ha!

Also stranded in this mansion on this stormy night are two girls dressed as “punks” crossed with Madonna and they speak in ridiculously bad Cockney accents. I think? I’m bad with accents. And there’s a nice dorky guy who gave the punk girls a lift and he’s the only one of the bunch (besides the little girl) who isn’t an asshole. Finally, we have the fabulously cliché owners of the mansion: an old doll maker & his wife. These two are great – they totally look the part. Both British actors, the woman was in Don’t Look Now & the man was in movies such as And Now The Screaming Starts! with Peter Cushing and was the Puppet Master in several of the films in that series. Look at these two! Perfect for Dolls: 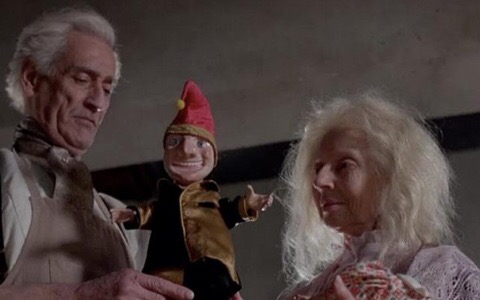 Anyway – everything you expect to happen, happens. Everyone you expect to die, dies. It’s predictable and the acting is pretty atrocious but… C’mon – Who cares? It’s a movie about dolls that go around killing people! It’s fun! It even has a bit of a moral (which is more than can be said about most horror films). Basically, the moral is that you should always stay young at heart. If you don’t, DOLLS WILL COME TO LIFE & KILL YOU!

Awesome. Thanks, Laura! I really enjoyed watching this one. 🙂

*I’ve upped my rating by half a point. This was a fun watch*

**Can I just add, as I didn’t realize this when I originally posted the review, that the girl (Bunty Bailey) from A-ha’s Take On Me video is in this?! She’s one of the two Cockney punk girls. Hilarious. 🙂