Welcome to Day Three of my “Four Days Of Mike Flanagan Movies“! Let’s see what I thought of home invasion movie Hush… I’ve already reviewed Oculus & the unique Absentia. Tomorrow I’ll hopefully be reviewing his new release Ouija: Origin Of Evil (if I’ve managed to see it by then!). 🙂 **Okay – it’s unlikely I’ll be reviewing that tomorrow as I’ve still not seen it. 😉 Have any of you seen it? 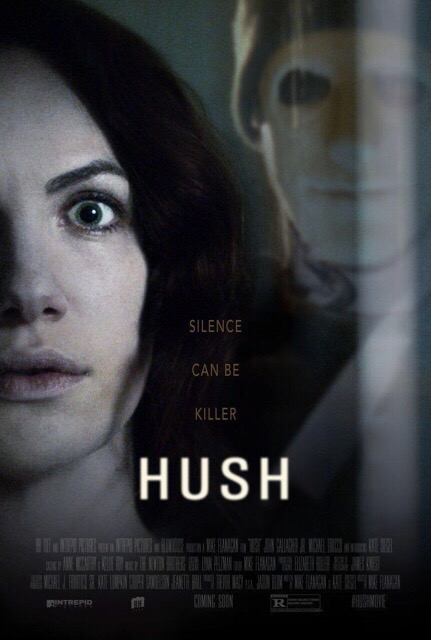 Plot Synopsis: (via IMDB)
A deaf writer who retreated into the woods to live a solitary life must fight for her life in silence when a masked killer appears at her window.

Hush is a worthy addition to the home invasion subgenre & I’d say it’s Mike Flanagan’s best film (of what I’ve seen so far). I slightly prefer Absentia just because I usually like supernatural horror more than straight-up home invasion flicks but Hush feels like Flanagan’s most well thought-out film whereas it seemed like he was making the story up as he went along in others. Hush has the best pacing, acting, and style of those I’ve seen and is the one I’d be most likely to recommend to people as it’s so straightforward & far less divisive than his other work.

The setup, a deaf woman being terrorized in her home by an intruder, is extremely simple but very effective. Has this been done before? The idea is so simple it feels like it must have… I know there was the Audrey Hepburn film where she played a blind woman terrorized in her home (Wait Until Dark – I just looked that up). Well, whether it’s been done before or not, Flanagan did well to include some very creative ways of using this setup (unlike in the thoroughly overrated Don’t Breathe, which makes a big deal of the “victim” being blind but then does nothing interesting with that plot device).

I especially liked the use of technology in Hush. This is an intelligent writer living on her own and, especially being deaf, she’s going to rely on a lot of modern technology for writing, communication, safely running a household, etc. The use of technology wasn’t overdone, however, and felt natural instead of forced. I liked how it made the usual “home invasion” thing feel more modern. Again, it’s a simple thing but helps give the film a further unique edge. Although, I suppose it will also date the film in the future…

Hush gives us yet another “strong female lead” (played fantastically by Kate Siegel), which is becoming more & more of a common theme in films (not something I’ll ever complain about!). However, she’s not perfect & I appreciated that. She’s real. As much as I’d like to kick ass like Furiosa or Ellen Ripley, I know I never could. I’d be seriously f*^ked in any extreme situation as I’m a serious wuss & even the simplest tasks in life give me panic attacks. Home intruder? I can’t even handle a spider in the bathtub! Siegel’s character makes mistakes. She makes some iffy & dangerous decisions while dealing with the man who is terrorizing her but she’s doing her best in a situation that most of us couldn’t handle. She’s very relatable & you care about what will happen to her (again – it’s very a simple thing to make your main character likable yet so many horror films fail to do this for some reason).

Hush is a good film with a strong central performance & I would definitely recommend it to fans of the home invasion genre. It takes a simple concept & does it very effectively, making use of the main character being deaf and having to use other senses & means of working around this in order to defend herself. I wouldn’t say that home invasion films are a favorite thing of mine but I’ve seen quite a few & enjoyed this one much more than most. Hush is definitely one of the better examples of this genre.