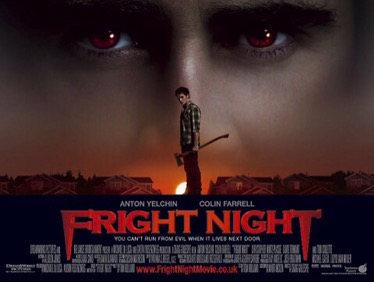 Based on Fright Night by Tom Holland

Plot Synopsis: (via Wikipedia)
The plot follows a teenage boy who discovers that his neighbor is actually a vampire, which culminates to a battle between the two.

I might as well start by pointing out the obvious to anyone who knows me: I prefer the original Fright Night and remakes piss me off. I haven’t actually watched the original in years, though, which is why I’m not going to do a comparison review. But I’ll always be fond of it as, along with A Nightmare On Elm Street, it was my introduction to 80’s slasher-type flicks at a junior high spin the bottle party. Ah, good times!

So, this is indeed yet another completely pointless remake but is it any worse than all the other pointless remakes? I guess it’s probably at the ever-so-slightly better end of things. It at least didn’t completely piss me off & make me want to shout at my TV like that godawful A Nightmare On Elm Street remake. Argh!!! That one actually damaged the franchise & I wish it didn’t exist. This Fright Night is just a bit “so what?”. It’s ultimately forgettable but is luckily different enough from the 1985 film that it hasn’t damaged it in my mind.

These signs seemed extraneous at the time…

The only reason I decided to watch this was to see Anton Yelchin (R.I.P.). I’ve liked Yelchin ever since Charlie Bartlett & was saddened by his untimely death. He was uniquely talented and the absolute perfect choice to play Charley Brewster in Fright Night so I have no complaints there. I also liked Toni Collette as his mother and had no problem with Imogen Poots as Charley’s girlfriend even though she’s too hot for him. But that’s movies for you! The nerdy guys always get the hot girls. Anyway – She’s a cutie & the name Poots never fails to make me giggle. Finally, I loved David Tennant as “vampire hunter” Peter Vincent. He’s my favorite Doctor Who and I found him strangely attractive in his leather pants & eyeliner…

Unfortunately, while the casting of these actors/actresses was spot on, I really disliked Colin Farrell as our main vampire baddie Jerry. I don’t normally like him much anyway but he really didn’t have the charisma or the sexy charming thing going on that I expect from a vampire. As for Christopher Mintz-Plasse, I can see why they chose him as Charley’s nerdy friend Ed but he’s so typecast now that he’s starting to get on my nerves & just ended up an annoying distraction. Massive fail with the casting of these two, which was disappointing as everyone else was so good.

Fright Night (2011) is pointless but I suppose it’s not horrible. I’m not stupid, though – I know that younger people don’t like watching older movies so are very unlikely to seek out the original. Therefore, I’m not going to waste my breath (er… fingers?) telling everyone to just watch the 1985 film. If you like Yelchin & think this looks like your type of thing, give it a go. As a standalone film, it’s a fun vampire flick. I’d have liked more humor & it dragged to begin with but it did really pick up once Tennant came into the picture more about halfway through. Tennant & Yelchin are both very good and made a fairly mediocre vampire movie not feel like a complete waste of time. Meh. I’ve seen worse.