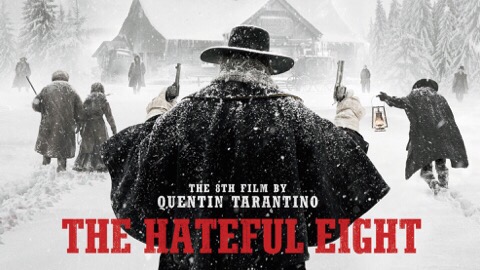 Plot Synopsis: (via IMDB)
In the dead of a Wyoming winter, a bounty hunter and his prisoner find shelter in a cabin currently inhabited by a collection of nefarious characters.

Yesterday I reviewed Jackie Brown as part of my 2017 Blind Spot Series & for Quentin Tarantino’s 54th birthday. In that review, I talked a bit about my disappointment over The Hateful Eight. It was hard to not compare the two films as I watched them almost back to back but it made me appreciate Jackie Brown even more and made me realize, in comparison, just how overblown The Hateful Eight is. 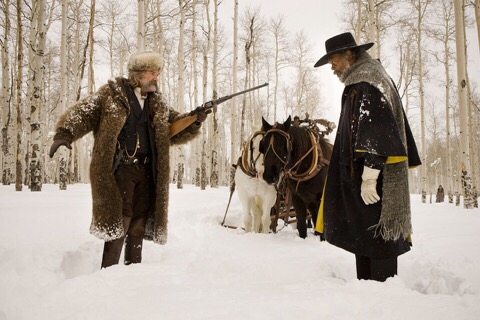 I already went on about this movie in yesterday’s review so I’ll keep this one short: The Hateful Eight is easily my least favorite Tarantino film (I’ve ranked them all HERE). It’s not a horrible film but he’s clearly believing his own hype too much & needs to return to the simplicity of a really good script as in things like Reservoir Dogs. His films have been getting more & more over the top and this one finally went fully overboard. It’s one thing to be over the top but another to be so dragged out & rather unenjoyable, which is something that I can’t say of any of his other films. 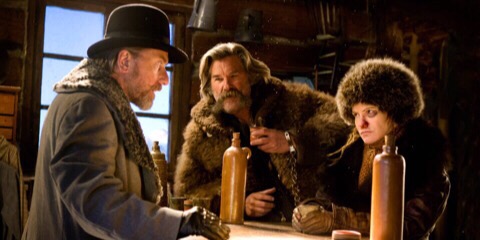 Okay – I’ll try to say some good things about this movie. Well, the best thing about it is Ennio Morricone’s score (but I’ll come back to that). The two main reasons I watched this were for Morricone and to see Jennifer Jason Leigh’s Oscar-nominated performance since I’m a fan of hers (plus to be able to say I’ve seen all of Tarantino’s films, I suppose). The clue is in the title and all these characters are indeed hateful (which isn’t going to make it easy to like a movie very much) but Leigh was great & her character was the one I enjoyed watching the most. I’m glad she got the recognition for this role as the movie itself lets its talented actors & composer down. Samuel L Jackson & Kurt Russell were also very good (although Jackson was, once again, his over-the-top Tarantino self) but no one else in the cast really stood out compared to these three. The other characters were extremely weak for a Tarantino film – he usually manages to make even the smallest characters in a film interesting. Maybe it should’ve just been The Hateful Three. But that’s a shit title. Did he come up with the title first & then had to write in five extra boring characters? Ah ha! That must be what happened. Plus, I think there were actually more than eight so he’s full of shit (you don’t count, Channing Tatum! The Hateful Nine isn’t a good title). 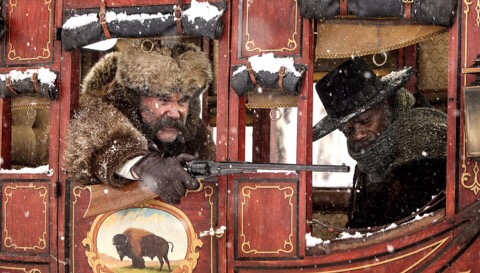 But back to Ennio Morricone. Morricone is a movie music God. Like I said in my Jackie Brown interview, the one thing Tarantino always does right in his movies is the music and I know he was overjoyed when he got Morricone to agree to score this (I want Morricone to score my whole life. That would be awesome). Is it Morricone’s best score ever? Well, no, but you can’t really top something like The Good, The Bad And The Ugly. Yes, he probably won the Oscar for this mainly because the Academy realized they’d seriously f*^kd up in never giving him an Oscar (other than an honorary one) until now. I hadn’t even realized that beforehand – he’s someone you’d just assume already had one. Anyway! Here’s a good interview with Tarantino talking about how he got Morricone to do this score. Wow. Morricone is a true professional. It was a very last minute thing and Morricone did it in very little time & in a way he’s not used to usually working. Combined with unused parts of his score for The Thing, I can’t believe they managed to pull this all together so well in that length of time. Tarantino of course wants to use him again so just imagine what we’d get if Morricone is involved in the project from the very start. It gives me chills thinking about it. I just hope, if they do work together again, that the movie can live up to the score next time! 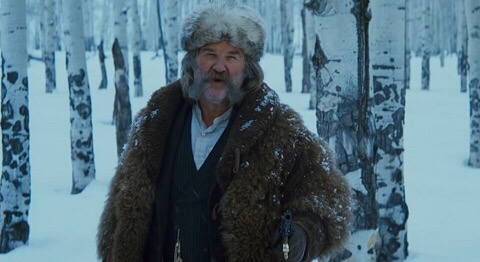 Oh. The cinematography was good too. There’s one more thing! The last & final good thing. The outdoor shots were quite beautiful and the opening, combined with Morricone’s score, was very good (I’ll post the opening scene below). Too bad the majority of the film is inside a dark, tiny cabin!!! To start out in a rather epic sort of way with this beautiful snowy landscape and to then end up stuck in a dark little cabin for what felt like far more than the 3 hour & 7 minute running time was so damn cruel. To us. Cruel to the audience. Never mind the characters! Although I suppose they would’ve frozen to death outside, so… 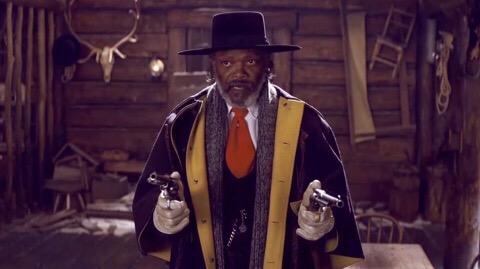 The Hateful Eight. It’s too damn long. It has a good score from a true master. It has three really good actors doing the best they can with a weak script. It’s pretty to look at when they’re actually outside that goddamn cabin. It’s violent as f^*k. It’s definitely a Tarantino film. I still like Tarantino’s films & I’ll still watch them all despite finding this one the most disappointing so far. To be fair, it could’ve been worse. But it could’ve been SO much better. And this review was meant to be short. Like Tarantino, I sometimes don’t know when enough is enough. 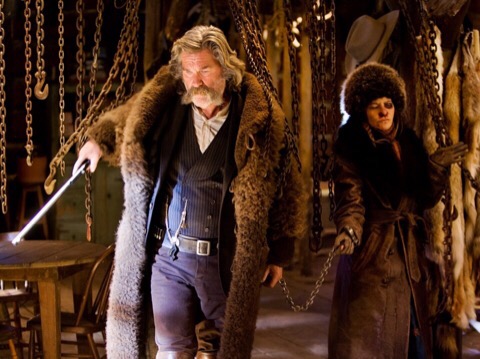