Based on Pontypool Changes Everything by Tony Burgess

Plot Synopsis: (via IMDB)
A radio host interprets the possible outbreak of a deadly virus which infects the small Ontario town. 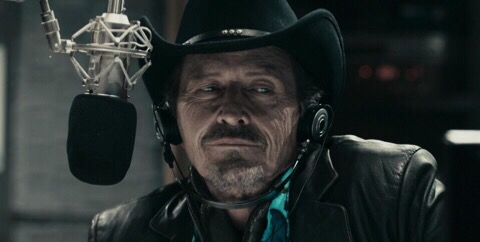 This film was quite unusual. I love that! With all the lame & predictable horror movies that keep getting made, it’s great when we actually get something with a concept as original as in Pontypool. The plot synopsis above doesn’t tell you much so I’ll add a bit more, which is kind of spoiler-y but tells you that this is a “zombie-like-virus outbreak” film with a unique twist. So don’t read the rest of this paragraph if you like knowing nothing whatsoever but knowing this is what made me want to see the film: the virus in this film is spread through language. Certain words cause certain people to become infected. Therefore, setting this movie within a talk radio station with a former “shock jock” radio DJ being the only one who can try to somehow get messages to listeners without infecting them was a brilliant idea. I already loved the overall idea behind this film before even watching it.

The execution of the story is a little strange, though, and I can’t say I fully connected with the characters. Only three characters really matter, played by Stephen McHattie (as DJ Grant Mazzy), Lisa Houle (as station manager Sydney Briar) & Georgina Reilly (as technical assistant Laurel-Ann). Oh, and we do get to hear from “helicopter reporter Ken” throughout the film but don’t get to really know anything about him. We get a few backstory tidbits about our three main characters at the station and I really liked the chemistry between the DJ & station manager but, for the film to have truly connected with me, I’d like to have cared more about the fate of these people. Even Zack Snyder’s Dawn Of The Dead remake managed more character development with way more than three characters. Hell, I’m still upset about poor Andy at the gun store across the street from the mall in Dawn Of The Dead and we only hear him on a walkie talkie! So I think it is possible to make a zombie or zombie-like-virus movie with strong characters. 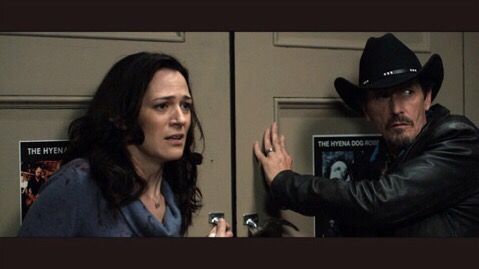 Also, I felt the telling of the story in Pontypool was a little messy. I suppose you could argue that that’s partly the point as the film should be showing us the importance of language and how we use it to communicate and how lost we’d be without it. Without proper communication, there’d be a lot of confusion. Unfortunately, I don’t think the story ever really delivers on its fantastic concept. There’s a lot to think about here! Imagine trying to communicate without using language that may potentially be deadly. It’s a very clever idea I’d like to see explored further. I see this has been adapted from a book (Pontypool Changes Everything by Tony Burgess), so I wonder if the book delves any deeper.

I want to give this movie a higher rating as I loved the idea behind it so much and I did quite like it but, sadly, I can’t say it really lived up to its potential. It seems very low budget (I don’t know if that’s the case) but that works well with this film and gives it a good atmosphere in the confined space of the radio station. There’s also some dark humor throughout it that will work for some people and not for others. I always love dark humor so would like to have seen much more of it. I don’t think it comes across properly and feels like a much more straightforward horror story than I think was intended. Finally, there’s a confusing extra scene after the credits that was originally meant to be the final scene of the film. I think it’s good that it was moved to after the credits as it would have been a little jarring as the actual end of the film. All in all, however, I have far more respect for a film like this that tries to be different than I do for the countless cliché horror movies (like The Forest, which I trashed HERE yesterday). Pontypool may not have fully worked for me overall but I can see some people really loving it & I’d be happy to watch it again with a friend if I had cool friends who watched movies with me. But I have no friends. Which is fine as it means I’m far less likely to be infected by a conversational virus!