Based on Black Panther by Stan Lee & Jack Kirby

Plot Synopsis: (via Wikipedia)
In Black Panther, T’Challa returns home as king of Wakanda but finds his sovereignty challenged by a long-time adversary, in a conflict that has global consequences.

I’ll keep this quick. As I say every time, I’m getting quite bored with superhero movies and even more bored with attempting to “review” them. They’re fun to watch & I do enjoy them but I’m not exactly deeply invested in these Marvel storylines. I usually ask the hubby to refresh my memory on characters & previous stories whenever we watch another Marvel film. They’re popcorn movies. I like the eye candy (THOR!) and the action. I’m afraid to say that, with Black Panther, I was thoroughly & very unexpectedly bored for the first half of the film. It does pick up but I really expected the movie to be better than it was. Maybe the hype hurt things. I usually try to avoid hype but it wasn’t easy this time. 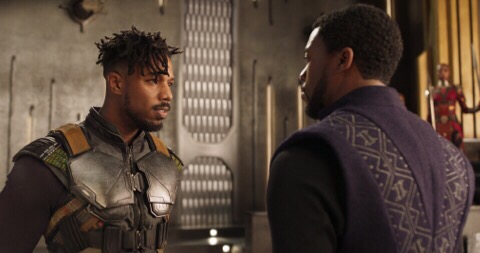 Although I was disappointed with the movie itself, I can’t say the same of the characters. I thought they were very strong and I especially loved the three main female characters, who are given loads of screen time and quite frankly steal the show. Don’t get me wrong – Chadwick Boseman is great and Black Panther is a super cool character while Michael B. Jordan made a very good & complex villain but those women kicked ass. But as much as Lupita Nyong’o & especially Danai Gurira kicked ass, it was the wise-cracking little sister Letitia Wright that I most enjoyed. Her cheeky interactions with big brother Boseman were great and the Bond-like scene where she shows off all her fancy gadgets was the absolute best. 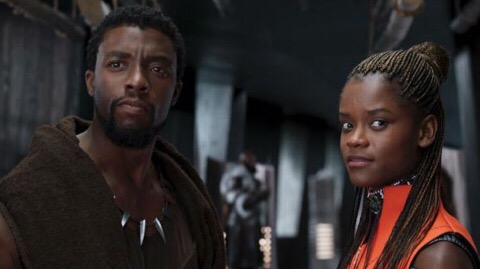 Then there was the lovely nation of Wakanda. I think the problem was that the movie took too long to finally let us fully see Wakanda, especially the super cool advanced technology. I found the first half of this movie extremely slow but, okay, I know I’m not a filmmaker and don’t know what could have been done better. All I know is that I was bored for at least an hour, which I can’t say of other Marvel films. Sorry! Wakanda was beautiful. The characters were great (other than Martin Freeman & Andy Serkis, who were written as fools and severely underdeveloped). I just didn’t care about the story. At all. I’m really happy that I liked the characters as this is actually the most important thing to me in films but I was still hoping for a better movie overall.

As I said, though, I don’t normally give too much of a shit about these Marvel storylines. Unfortunately, I think Black Panther has come at a time where I just really can’t get into these movies anymore. After the Guardians Of The Galaxy films (now easily my favorite superhero movies) & Thor: Ragnarok, I know that the more lighthearted & “funny” comic book movies are my thing. Those are definitely the ones for me. Give me Deadpool over Avengers: Infinity War. So I really am sorry for the slightly low rating I’m giving Black Panther. Maybe it doesn’t deserve it but I also believe it doesn’t deserve the massively high ratings I’ve seen. It has some very strong points but it was a disappointment for me personally, especially after the hype. It’s good. Nothing more, nothing less. It’s one of the better comic book movies but it’s not the best.