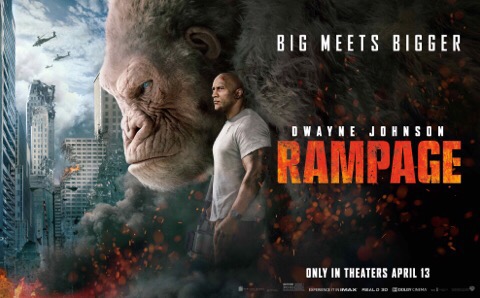 Based on Rampage by Midway Games

Plot Synopsis: (via IMDb)
When three different animals become infected with a dangerous pathogen, a primatologist and a geneticist team up to stop them from destroying Chicago.

Went to this movie the other night with the hubby & kid. It’s cool when the kids get older and the “family” movies get more fun! It’s probably the most extreme film the kid has now seen – it’s a fairly full-on monster movie. As far as family monster movies go (are there many of those??), Rampage was predictable and somewhat forgettable but a thoroughly entertaining popcorn movie. We all enjoyed it.

I may be starting to like Dwayne Johnson. I mean, I never paid much attention to him and I don’t think I’ve seen many movies he’s been in (I can only think of this, San Andreas & Jumanji: Welcome To The Jungle). Oh, I suppose there’s Moana as well but he’s possibly the worst thing about that. Sorry! I don’t think he’s personally bad in it – I just don’t like Disney characters who aren’t timeless. I also really don’t like the Genie in Aladdin although I like Robin Williams. I want a Disney character, not a really obvious real-life actor. Oops – I’m off topic! The Rock is perfect for roles such as the one in Rampage and in Jumanji, which I actually liked a heck of a lot and found very funny. Weird how these big muscle guys end up in comedies or family movies so often. Well, Johnson is all he needs to be in this role. Is that a compliment? I think I mean it as one. I mean, it’s not like a movie like this is going to win anyone an Academy Award or anything.

The real star of this, though, is the albino gorilla (named George). Johnson’s character has helped raise George & taught him sign language but things all go to shit when a spaceship explodes with, like, science experiments that crash land in the Everglades and turn three creatures (including George) into enormous, raging monsters. The villains (those in charge of the experiments, including Malin Akerman) are cheesy as fuck but that’s the way villains should be in these sort of movies. Naomie Harris was good as the experiment expert (geneticist) who teams up with Johnson. Jeffrey Dean Morgan was mostly just distracting since he made me think about how much The Walking Dead sucks now. Who cares, though – this movie is all about the big monkey. George is cool. My kid loved him.

Rampage. It’s a monster movie. It’s cheesy but fun. It’s based on a video game that I know nothing about. Some have said it’s probably the best video game movie (as we know, they all suck major ass for some strange reason). No, it’s not a “good” movie but it’s fun & thoroughly entertaining. Yes, it’s probably now the best video game movie. There’s loads of action so, if you love watching monsters destroying big cities, you won’t be disappointed. It’s directed by the same guy who did San Andreas, which was a fun disaster movie but was also a truly bad film. Rampage has just as much destruction but it’s definitely a big improvement on San Andreas. And it’s cooler watching mutant monsters destroying cities than earthquakes. And there were no lovable big gorillas in San Andreas. Rampage is definitely the better film. I kind of want to give it a slightly higher rating…