Based on Meg: A Novel of Deep Terror by Steve Alten

Plot Synopsis: (via Wikipedia)
The Meg follows a group of scientists who encounter a 75-foot-long (23 m) megalodon shark while on a rescue mission at the floor of the Pacific Ocean.

I’m not gonna lie: I liked The Meg! But it’s NOT good. Being a movie blogger I probably come across as a slight movie snob sometimes. Yes, I like a load of worthy classics and I don’t even bother talking to real life people about most of the films I love as I know they’ll not have seen half of them let alone have even heard of them. But I like shit like this too sometimes, dammit. It’s possible to enjoy the worthy films as well as the ridiculous popcorn movies. And, yes – this movie is as ridiculous as we were all probably expecting.

I’ll start by saying that I’m maybe giving this film a rating that’s at least half a point higher than it deserves. That’s because I think reviews have been slightly too harsh. It’s a movie about a big fuck-off prehistoric shark, for crying out loud. And, hello? It stars Jason Fucking Statham, not Meryl Streep. Are people expecting Oscar worthiness or something?? You know what this dumb ass disaster thriller does have that quite a few dumb ass movies in this genre don’t have, though? Likable characters! Cliché & formulaic characters, yes. But who cares? I want characters that I like. I say this all the time. It’s possible to spend a little bit of extra time writing a few characters that we care about, even for a dumb movie like this. That makes a dumb movie like this far more enjoyable (for me, at least – the characters are just as important to me as a film’s story). I didn’t want these people to get eaten (except for one jerk who you’re supposed to want to see get eaten). I think the problem may be that this fucked-up society we live in actually wants a movie full of assholes who all get eaten???? Sorry – they don’t all get eaten in this. Maybe that’s why it’s had bad reviews? 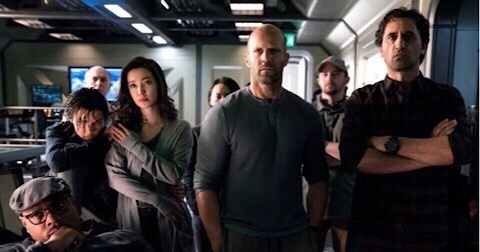 You know how I know this movie had fairly decent characters? I didn’t want Jason Statham to get eaten! I’m not a fan. For the most part, I avoid Statham films like the plague. Other than Lock, Stock And Two Smoking Barrels, he’s in the shitty kind of action movies that I hate. But I liked him fine in this. I’d probably have liked this movie more with a different action actor… (was The Rock unavailable?!). But he was fine and I seriously wanted the romance to fully blossom between him and the smart, pretty oceanographer (played by Li Bingbing). And her daughter (Shuya Sophia Cai) was cute as shit without being at all annoying in that way they often write kids’ characters in bad movies. I wanted them to all live happily ever after. And, you know what? These characters were upset when other characters died. They didn’t just go “oh well” and move onto the next scene. So many movies in this genre do that. Ruby Rose was terrible, though. I’m sorry if she has fans – I don’t really know anything about her. She has an interesting look but she made Statham’s acting look like Meryl Streep’s after all.

What else can I say? This movie is dumb but fun and we at least get some characters who are slightly more well written than we normally get in this genre. I mean, they have a bit of humanity to them. I think The Meg was marketed somewhat wrong as well, which may not have helped. It looked like it would just be a load of absolute carnage with all those people by the beach (in that colorful poster up there – it’s actually quite a good poster). This isn’t that shitty 2010 Piranha movie (starring Statham’s real-life ex-girlfriend, actually. Ha!). Maybe people were expecting loads of blood & limbs flying everywhere. Don’t go in expecting that and you may appreciate this more. The majority of time is spent on the group of researchers who discover (and accidentally unleash) this massive shark and must then survive while trying to hunt it down.