Finally – here are two review re-posts of two horror movies I watched this year that weren’t truly dreadful. I didn’t love them but they were watchable, unlike most the horror films I saw at home this year… 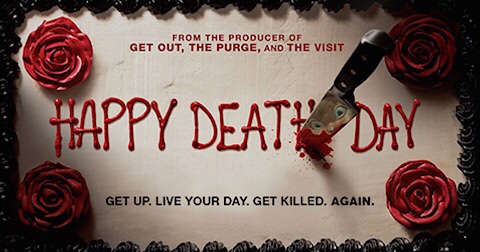 Directed by Christopher B. Landon

Plot Synopsis: (via Wikipedia)
Happy Death Day follows a college student who is murdered on her birthday and begins reliving the day over and over again; at that point, she sets out to find the killer and stop her death.

I was really annoyed that I missed this in the cinema last year as it sounded like a fun horror in the slightly-cheesy 80’s slasher style I’ll always have affection for (since I’m old). But the movie was a disappointment, although it’s enjoyable enough for an hour and a half of your time. I just think I won’t remember a thing about it in a few years. The biggest problem was probably that the main character was a hateful bitch, so it was hard to care if she’d ever be able to stop her murder from happening. Yeah, she changes at the end (as to be expected – the whole point is that she needs to be a better person), but… Meh. I think my expectations were just too high. This concept was obviously done so well in Groundhog Day that nothing that’s tried to use that same idea has worked as well. If you want a non-horror teen movie with the same idea, I enjoyed Before I Fall slightly more than this one. And if you want a modern horror comedy with a cheesy 80’s thing going on, The Final Girls was better than this one as well.

Based on The Ritual by Adam Nevill

Plot Synopsis: (via IMDb)
A group of college friends reunite for a trip to the forest, but encounter a menacing presence in the woods that’s stalking them.

Still not sure about this horror film. For the most part, I think I liked it. It was atmospheric and genuinely creepy at times (I rarely find horror movies scary in any way). The conflict between this group of friends due to something that happens at the beginning worked quite well with the story later on of the presence in the forest and the way it brings out hidden resentment. The thing that will make people love this or hate this is the ending. The movie changes and becomes a much different film from the Blair Witch type of beginning and this won’t work for everyone. I didn’t mind the ending but preferred the more mysterious, less in-your-face start to the film.