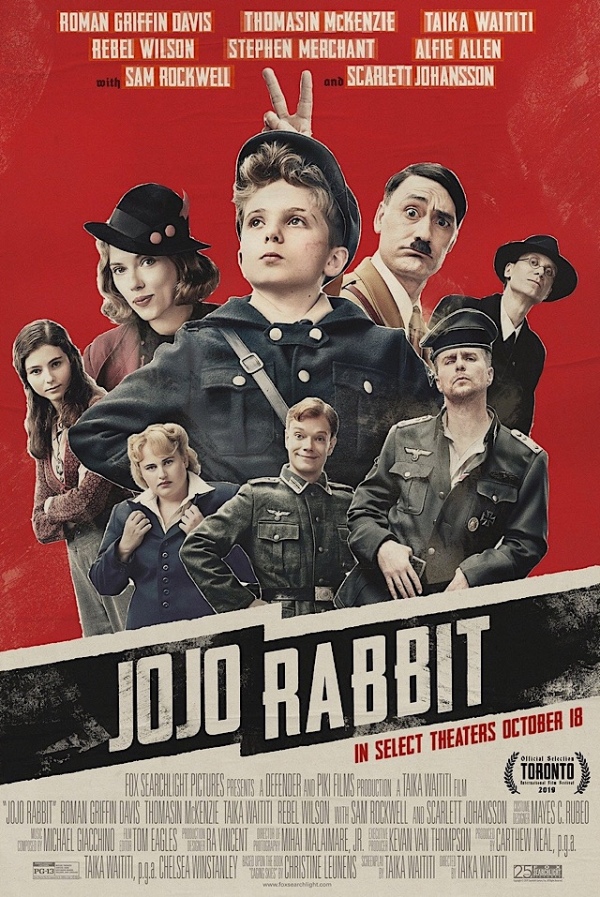 Based on Caging Skies by Christine Leunens

Plot Synopsis: (via Wikipedia)
Roman Griffin Davis portrays the title character, Johannes “Jojo” Betzler, a Hitler Youth member who finds out his mother (Scarlett Johansson) is hiding a Jewish girl (Thomasin McKenzie) in their attic. He must then question his beliefs, while dealing with the intervention of his imaginary friend, a fanciful version of Adolf Hitler (Waititi). 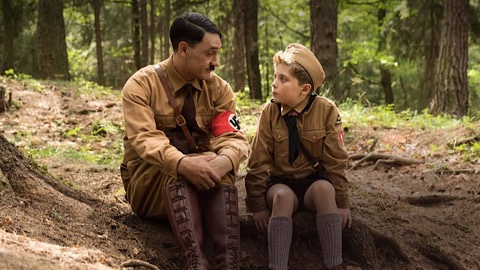 Hmm. I liked this movie. I didn’t love it like, yet again, Film Twitter did. But they love every current movie release that doesn’t totally suck. When will I learn to ignore the hype from obsessive young film fans?? I do love satire & dark comedy and, though this is obviously a controversial topic, it’s not like it hasn’t been done in this way before. Has no one watched any movies from before the year 2000? I do think Taika Waititi is pretty damn funny, especially on Twitter, and seems like a lot of fun to hang out with. But chill, people. He’s funny. He’s made some decent movies. Jojo Rabbit is a pretty good film. Again, though, let’s not overreact. There are better films (and worse ones, of course).

This is obviously a divisive film (although I’ve only really seen either love for it or people complaining about people hating it despite me seeing no negative tweets or posts about it??). A film like this is obviously always going to be an uncomfortable watch. “Funny Hitler” is a difficult thing to pull off. I’m not completely sure if Waititi fully managed to make it work but, overall, the movie succeeds in giving us some funny moments and some truly heartbreaking ones. I thought it maybe kept things a little too light for such a heavy topic but, to be fair, I think it will have been hard to get the perfect balance between the humor & the horror. Not being a lover of drama movies, the lighter tone worked for me anyway but it may not suit everyone.

Roman Griffin Davis is good as the title character & I knew Thomasin McKenzie would make it big after seeing her in Leave No Trace. I also loved the small part of the friend, played by Archie Yates (he’s adorable). They all did well portraying the innocence of young kids caught up in a horrific time. And Scarlett Johansson was great. I’m still not sure how I feel about her as an actress as she kind of rubs me up the wrong way but there’s no denying that she’s been brilliant in some of her roles. Her Best Supporting Actress Oscar nomination for this movie is deserved. Her character and, of course, the kids are what make this movie and give it some heart. Without them, it would have been too “silly” and lacking in emotion. Overall, I don’t think Jojo Rabbit is a perfect film but it did well with subject matter that could turn into a truly disastrous film if not handled well. And, as I absolutely adore the Charlie Chaplin movies I’ve seen, I’m now kicking myself for not yet seeing The Great Dictator to be able to compare these two films. If I wasn’t taking a blog break, I’d do a post on them both. Maybe next year…