Plot Synopsis: (via Wikipdia)
A semi-autobiographical take on Chung’s upbringing, the plot follows a family of South Korean immigrants who try to make it in the rural United States during the 1980s. 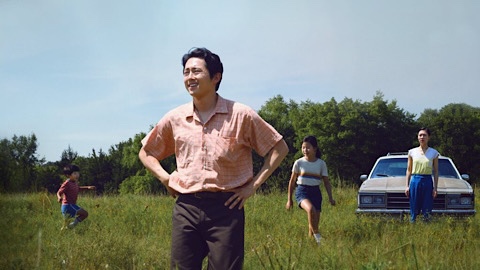 Was so happy to see this finally pop up on Sky Cinema as it’s one of the Best Picture nominees this year that I’d wanted to see the most. I have to say I enjoyed it much more than winner Nomadland but probably still like Promising Young Woman the most. But Minari would be a close second out of the six nominees I’ve seen.

It’s a simple story about a Korean-American family trying to start a farm in Arkansas in the 1980s. The characters are what make the film work. I’ve liked cute Steven Yeun ever since he was my favorite character Glenn on The Walking Dead and he’s good in this film. It was great seeing him in a major role. But my two favorite characters by far were his adorable young son played by Alan S. Kim and the quirky grandma played by Youn Yuh-jung. She was great & I’m happy with her Best Supporting Actress Oscar for this.

I also loved this little bit of the film: I admit to having a Mountain Dew addiction (for health reasons I can’t drink it right now & it’s killing me!). Anyway – I think everyone knows it’s super high in caffeine & sugar and one of the worst things you can possibly drink so I loved that the family in this were obsessed with Mountain Dew as it’s “Water from the mountains. It’s healthy!“. That was cute. I also just really liked the relationship that forms between the boy & the grandma and also kind of liked their very weird neighbor. I wish more movies focused on having characters you care about like you do for those in Minari. I just wanted this family’s farm to be successful so they could be happy & have an easier life!