I’d been contemplating doing October Horror Month again this year. But I’ve just realised it’s October 1st & I have nothing prepared. Well, I’m not sure if I have the energy to post at least one horror review every day of October like I have other years but maybe I’ll give it a try as I’ve watched at least 31 horrors in the past year. So these will be re-posts or re-blogs of reviews I’ve already done. I’ll try! Let’s start with two very short reviews…

Directed by David Prior

Based on The Empty Man by Cullen Bunn & Vanesa R. Del Rey

Plot Synopsis: (via Wikipedia)
The Empty Man follows an ex-cop who, upon an investigation into a missing girl, discovers a secret cult.

Hmm. I suppose this was pretty decent for a modern horror film. So many people were going on about it that I decided to check it out on Disney Plus.

I thought it started out pretty great. I really liked the stuff at the start on the mountain & thought it was still pretty good when the teenagers first got involved in the next section of the film. The movie also had a great creepy vibe, partly thanks to the music I think, so I was glad I was watching it alone late at night & getting the heebie jeebies a little as I find so few horror movies to be very creepy. I like being creeped out! Give me a creepy atmospheric supernatural horror over gory stuff.

I’d say one thing in this was too violent for my taste (not sure why that one person had to die so violently?!) but otherwise it wasn’t too over the top. I think it just fell apart for me at the end. It was a decent story & I was certainly intrigued as to what was going on but, I dunno. The ending was okay but I do feel let down by horror movie endings the majority of the time for some reason. I guess I’ve seen far worse endings.

Overall, this was pretty good compared to most the modern horror crap out there. Oh! And I really liked that creepy skeleton in that image. Kind of a spoiler but not really – it’s at the start of the film & is also what convinced me to watch this when someone posted that image on Twitter. 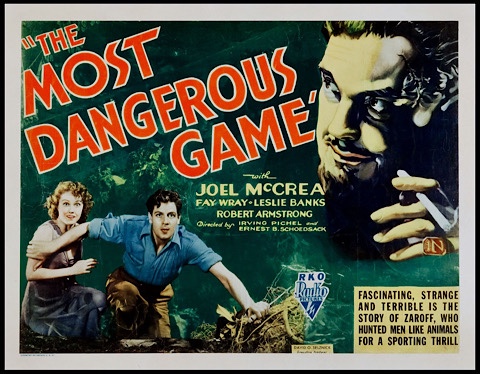 Based on The Most Dangerous Game by Richard Connell

Plot Synopsis: (via Wikipedia)
The plot concerns a big game hunter who deliberately strands a group of luxury yacht passengers on a remote island where he can hunt them for sport.

Saw this pop up on Amazon Prime & was aware of the story by Richard Connell being a classic (inspired by those rich assholes who hunt big game) so thought the 1932 film should be interesting. Plus I really enjoyed the 2020 film The Hunt! Not that they’re at all similar, of course, but the “hunting of humans” idea is the same.

This was good but I wish I’d just looked it up on YouTube (it’s available) as the one on Prime is a horrible colorised version. Why do they do that?! Anyway, it was still a good film even with dodgy coloring. It’s a timeless story & works just as well today. Maybe even more so now, as hunting big game is somehow still a thing. How?!? The thought of the tables being turned is great. This version stars Joel McCrea, Fay Wray and Leslie Banks. Hey! The King Kong actress! I should really watch that version again. Anyway, she was good and far less “damsel in distress” than you’d expect in such an old film. I kept thinking she really looks like Penelope Ann Miller – she could have played her in her life story.

I think this film has actually aged quite well & would recommend watching the black & white version on YouTube.