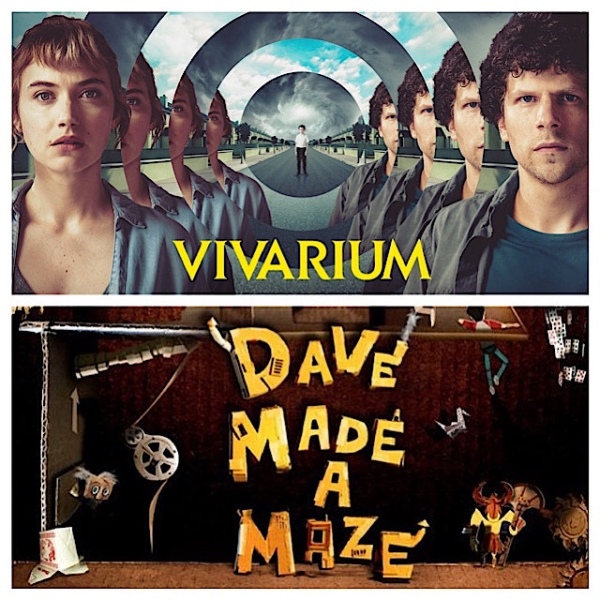 Plot Synopsis: (via IMDb)
A young couple looking for the perfect home find themselves trapped in a mysterious labyrinth-like neighborhood of identical houses. 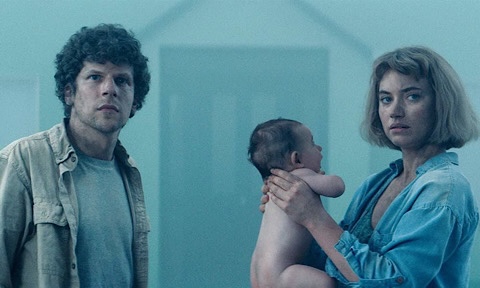 Wow, this was pretty fucking weird. So, since I love weird, I really enjoyed it. And, like most weird movies, I’d be very hesitant to actually recommend it to anyone as they’d hate it & probably think I was a weirdo. Which I am but, you know, I try to hide that in real life…

Here I am watching an Imogen Poots movie again. Why do I seem to watch all her movies?? *Poots!* Jesse Eisenberg is in this too. Man I hate him but, whatever – I don’t care too much who is in a movie anyway as I care more about the story & the overall movie itself so I guess he was tolerable. I really liked this story and the look of all the identical houses in this eerie neighborhood that the couple find themselves trapped in & unable to escape after a creepy “real estate agent dude” brings them there to show them a house.

It’s a bizarre film and I suppose part of the reason I liked it was that it had a Twilight Zone vibe & that (original series) TV show will forever be my absolute favorite. Adore it. This movie reminds me of one very specific Twilight Zone episode where a couple wake up in an empty town (Stopover In A Quiet Town is the episode if you’re curious. A classic!). So I loved the feel of this film. It was bonkers & unsettling & the kid in it gave me the absolute creeps. And I’m still not 100% sure what the hell was going on or what the point of the whole thing was but it was certainly one of the more entertaining stories I’ve seen in a while. I guess it was about being stuck in suburbia & doing exactly what society expects of you.

If you love The Twilight Zone or maybe a bit of Black Mirror or if you just like your films to be weird & unpredictable because like me you watch too many movies & get bored seeing the same old shit, it might be worth checking this one out (I saw it on Film4). You might hate it. You might love it. You probably won’t forget it. And the kid might haunt your nightmares.

Plot Synopsis: (via Wikipedia)
The film centers on the titular Dave who builds a cardboard fort that somehow supernaturally houses an entire labyrinth full of deadly traps and creatures.

Another weird film that I also, of course, enjoyed. I’m a creep! I’m a weeeeeiiiiiiirdooooooo! Amazon Prime had been pushing this on me for a while & I suddenly decided to give it a try one day when I noticed it was only 80 minutes (I’m not one of these “I can’t watch long movies!” people – I just don’t have much spare time). Again, like Vivarium, I loved the concept. This artist dude builds a maze of cardboard boxes & gets lost and trapped inside it as it grows & takes on a life of its own. His girlfriend enlists the help of some of their friends to go in after him but they of course end up trapped too.

It’s a fun film and a mix of genres (fantasy, adventure, comedy & horror according to Wikipedia). The characters are pretty likeable & the “horror” is only comedy horror with some funny cartoonish blood. Where Vivarium made me think of a good Twilight Zone episode, the synopsis of this one made me think of an absolutely fantastic short story called Voluntary Committal by Joe Hill in his collection 20th Century Ghosts (which I highly recommend if you like good short stories). They’re very different stories overall but I like the concept of a spooky maze made out of boxes, I guess. Anyway – this is a fun film & the plot is unique so check it out on Amazon Prime if you want a short film with a quirky sense of humor. 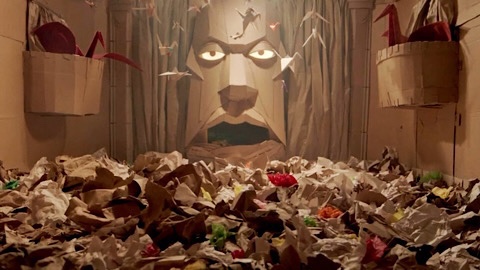