Today’s IMDB Top 250 Guest Review comes from John of 501 Must See Movies Project . He also reviewed Amadeus HERE and Platoon HERE. Thanks for the reviews, John! 🙂 Now let’s hear his thoughts on A Beautiful Mind, IMDB rank 198 out of 250…

Also, if you’d like to add a link to your IMDB Review(s) on your own blogs, feel free to use any of the logos I’ve used at the top of any of these guest reviews.

“Imagine if you suddenly learned that the people, the places, the moments most important to you were not gone, not dead, but worse, had never been.”

A Beautiful Mind explores the life of John Nash (Crowe), Nobel Prize winning mathematician.  Beginning with his graduate studies at Princeton, Nash discovers a new concept of governing dynamics, the Nash Equilibrium.  Following Princeton, Nash works at a research lab at MIT doing work for the Pentagon and teaching on the side.  He meets Alicia (Connelly), one of his students, and the two fall in love.  He is also approached by William Parcher (Harris) to do classified work in decoding a Soviet attack on America.

However, not everything is as it appears.

Based on the book of the same name by Sylvia Nasar, A Beautiful Mind is a film that balances a number of movie genres.  It’s got drama,mystery, romance, a little bit of comedy.  The various elements of the film make it insightful, suspenseful, and entertaining on a number of levels.

From a visual perspective, a lot goes on in A Beautiful Mind.  Some of the film’s early scenes, specifically at Princeton, have an older look to them.  I like when a director can add little elements like that.  It helps in contrasting the different time periods throughout the film.  They also do good with showing Nash’s perspective as he sees the various connections and patterns in the math.

Though some of the character’s mannerisms were annoying to me, Russell Crowe does a great job of bringing John Nash to life.  I’m probably nitpicking more than anything else.  He does well with portraying the paranoid genius who was given “two helping of brain but only a half a helping of heart.”  The real life John Nash visited the set, and Crowe notices some of his tendencies, hand movements, and things of the sort, and incorporated them into his performance.

A Beautiful Mind was filmed almost entirely chronologically, and I think that helped Crowe’s performance as he became Nash and progressed naturally through the various stages of life portrayed in the film.

Jennifer Connelly, wow, what a performance is all I can say.  Even though she doesn’t command every scene she’s in, she gives a strong performance and more than holds her own.  From the beginning of their love story through the pain and anguish later on, her portrayal of Alicia Nash is believable and genuine.  As I’ve looked at some of the other people considered for her role and Crowe’s, I know Ron Howard made the right call with those two. 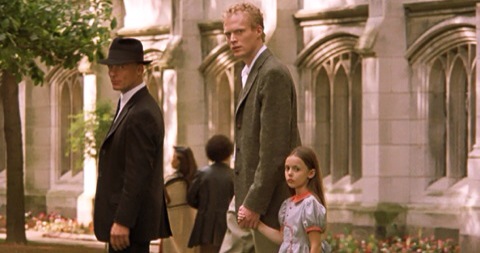 Paul Bettany is an interesting character to say the least.  Having portrayed Geoffrey Chaucer in A Knight’s Tale, an entertaining role, Bettany demonstrated his ability to be a sort of classical funnyman in A Beautiful Mind.  Though a lot of his performance has the comedic undertone, he has nuggets of truth and deep insight throughout the film.  Ed Harris also gives a decent performance.  He excels in the serious no-nonsense roles like Parcher.  I don’t know if I would call him a typecast character, but his most memorable performances are ones like this one.

This is a film I’d recommend seeing twice before forming an opinion about it.  I saw this one twice in the theaters: the first time I hated it, the second time I loved it.  Knowing the major plot twist gives perspective and a different understanding to the first half of the film.   Akiva Goldsman, Ron Howard, and Brian Grazer created the world through Nash’s perspective, so the audience experiences the major twist at the same time Nash does.  I remember being very confused the first time I saw it, hence not liking it. 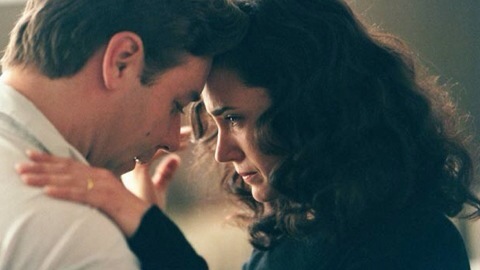 “I need to believe, that something extraordinary is possible.”

It’s been probably about a decade since I’ve watched A Beautiful Mind.  Having a chance to re-visit it for me was enjoyable and a reminder of how great A Beautiful Mind is.  Russell Crowe brings John Nash’s story to life, has great on-screen chemistry with Ed Harris, Paul Bettany, and most importantly Jennifer Connelly.  Ron Howard has created a great film, one certainly deserving of the Best Picture Oscar.  See this one twice if you haven’t seen it yet.