There are another 15 movies available if anyone wants to do a guest review. You can find the list of remaining films HERE. See the full list & links to all the reviews that have already been done HERE. Also, if you’d like to add a link to your IMDB review(s) on your own blogs, feel free to use any of the logos at the top of any of these guest reviews.

Ask me to name a list of movies that have profoundly disturbed me for the longest time and you will find Black Swan gracing the very top; Oh you know because swans are graceful and all. Did you find that funny? Because that’s the only funny thing you’ll see from this review and from the movie. Darren Aronofsky’s dark reverie of a film proliferates ideas of duality, the yin-yang of human nature and it’s inherent dichotomies between good and evil. An opening shot of Black Swan is a memorable dance sequence involving Natalie Portman’ as she performs the Swan Lake where the princess Odette is cursed and transfigured into a swan by the devilish Rothbart. It is hauntingly choreographed by Aronofsky whose brilliance we see throughout the film. What’s particularly symbolic here is how the ‘swan’ persona, which becomes the crucial metaphor throughout the film, is at once both graceful and cursed; A little something to note when interpreting the film. Black Swan is like art that slowly unwraps itself with every deliberate attempt to shock and traumatize, revealing the tragic poise it so gracefully holds.

Aronofsky is definitely the artist who isn’t afraid to show. In fact, his philosophy here is that if he could expose everything, he would. Psychological elements flood the film till the point where truth and reality are bent to fit the style. Potraits would come alive (think sinister version of Harry Potter talking paintings) and mock Nina’s increasingly blurry perception. Hallucinations allow Aronofsky to feed the emotional conflict and mental delusions. Black Swan is not for the faint of heart because around every dark corner lie monsters of the mind.

Black Swan’s methods may be extremely explicit but it’s themes are cuttingly profound. Some call it a passionate melodrama which I think doesn’t do the film justice. Melodrama connotates dragging…the kind of dragging that irritates but sure perhaps it’s also artistic. I beg to differ. For as much as Black Swan has deliberated it’s hypnotic sequences and emotional conflicts, it has also haunted my senses and heightened my anticipation for the tension that would ensure. That alone is enough to dispel the idea that it’s a tedious and melodramatic affair. Yes, it’s hyperactive and yes it’s visually unrestrained but damn, it’s one hell of a movie. 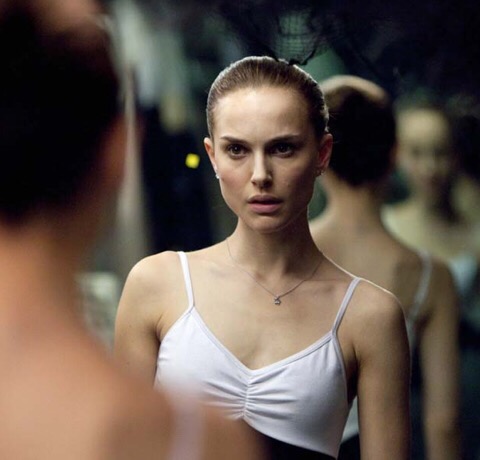 In my view, Friedrich Nietzche’s book on philosophy titled ‘The Birth Of A Tragedy’ is somewhat linked to the film in the sense that Black Swan’s interpretation lie in the way that nature and tragedy are set up to be. To be fair, there will be endless interpretations of the film and mine is just one out of many. But I think that in order to fully appreciate the beauty in what Natalie Portman has portrayed in Nina is essential. It is only through her flaws that I also see her complete beauty and only through the film’s depressing moments do I appreciate the fixed balance dichotomy between light and darkness, desire and repression, id and ego. Black Swan’s entrancing dance sequences relates somewhat to Nietzsche’s notes on greek tragedy and music; Notice how the ballads in the film rise and fall periodically, with crescendos and dimineundos that mirror Nina’s oscillating state of mind. Natalie Portman and her double do well to convey the the polar opposites of effeminate grace and unbridled release that torment Nina during her performances. She battles not her inner demons but her conflicted nature. I read that Aronofsky had many takes and rehearsals for his dance sequences. It’s no wonder that he was able to surface the raging tempest of the mind so well. Everything from flawless acting to musical lyricism to contrasting imageries of black and white pour out in perfect yet painful harmony. As each dance progressively becomes more challenging and demanding, so too do the lines between the black and white swan.

What is more powerful than pleasing the audience? Shocking them. I’m inclined to name a few more films like Under the skin and Mulholland Drive. It might just be my taste but there’s no point shocking someone without telling them why. Though the abovementioned films have got me jumping right out of my seat, Black Swan does it with brutal simplicity. It’s not abstract which is why I like it so so much. You don’t spend time wrecking your head thinking why Nina did this or that and instead are left to mull over the lasting consequences of the character’s actions. Black Swan’s may range from being a psycho-sexual study to a director’s symphonic masterpiece, but in the end, it’s destructive melancholy is a psychedelic look at our unresolved natures.

P.S. This was my second best movie of 2010 behind Inception. The Social Network is third. And The King’s Speech is nowhere to be seen 😉